Alan Turing, Bletchley Park and the origins of Big Data

Sir Dermot Turing, Alan Turing’s nephew, will talk about his uncle’s work at Bletchley Park, the origins of the machinery approach to code-breaking, and how this developed at Bletchley. During the course of World War 2 the Government Code and Cypher School transformed decryption from the work of cottage artisans to an industrial-scale intelligence factory. Alan Turing’s lesser-known role in the Machine Coordination and Development section casts light on one of the other secrets of the War – just what was Alan Turing doing after his work on Enigma? 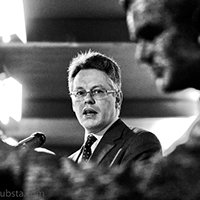 Dermot Turing spent his career in the legal profession, most recently as a partner of Clifford Chance. He is now focusing on the history of cryptology and is active as a trustee of Bletchley Park. Dermot Turing is the nephew of Alan Turing and author of the latest biography on Turing (‘Prof’: Alan Turing Decoded, published in 2015 by The History Press).

Learn more About us