My path to Loughborough wasn’t a clear-cut one. I had just moved to the UK and had yet to garner a full understanding of the higher education system. All I knew was that Loughborough was the best university for courses related to the built environment.

What made Loughborough stand out to me was the personal letter I received after I was accepted. Not only did it congratulate me on my results, but it also mentioned an accomplishment that I had written about in my personal statement. I found that really touching because it demonstrated that the University had a general interest in knowing who I was as a person, not just my grades.

When I finally arrived at the University’s open day, I was enthusiastic about starting a new chapter of my life. Walking around the campus that day only amplified that feeling and I was certain that I had made the right decision. Furthermore, the professors were welcoming, knowledgeable and genuine when conversing with me. Most importantly, I found that amid the typical open day excitement, there was a sense of calm that pulsed throughout the campus.

Loughborough is a very social place with lots of opportunities for you to get involved in. Other than sports, there are over 100 societies that you can join. There are also seminars and talks that are always taking place across campus and virtually. Being able to join different activities has really helped me meet like-minded people. 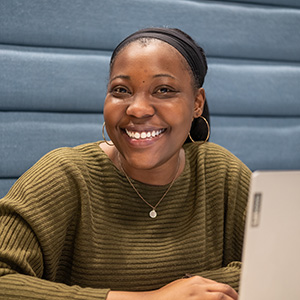 I chose Urban Planning because I like the idea of creating long-lasting positive change. Urban Planning is present within our lives and affects most of our decisions: where we live, how we travel, even how we feel. I believe that if planning policies are designed to put people and the environment first, we may be able to create more sustainable and healthy societies. I would like to be a part of the next generation of planners that can make this goal a reality.

I’ve really enjoyed the level of interaction that has occurred between myself and my fellow course mates. The course has been designed to be interactive, thereby providing us with opportunities to connect.

My lecturers have an evident interest in their field and are always finding creative new ways to bring this passion to our lectures. I also like that they have diverse backgrounds, and as a result, what your learning is from a global perspective. The lecturers are genuinely nice people who are always willing to help you and share their knowledge.

After graduating, I would like to work in different countries so that I can gain a worldly perspective on planning. A foundation like that would positively impact my future, personally and career wise. A degree from Loughborough is the key to making this a reality. Not only because it is one of the top 10 universities in the country, but also due to its strong ties to the built environment industry. Its ties ensure that what we are learning is current and relevant, making you more attractive to future employers.

Urban Planning at Loughborough is an amazing course because it provides you with a global perspective of the role of planning in societal development. It is well-structured, engaging and taught by helpful lecturers who are highly experienced in their fields. If you’re passionate about the subject, you will absolutely love studying this course at Loughborough.