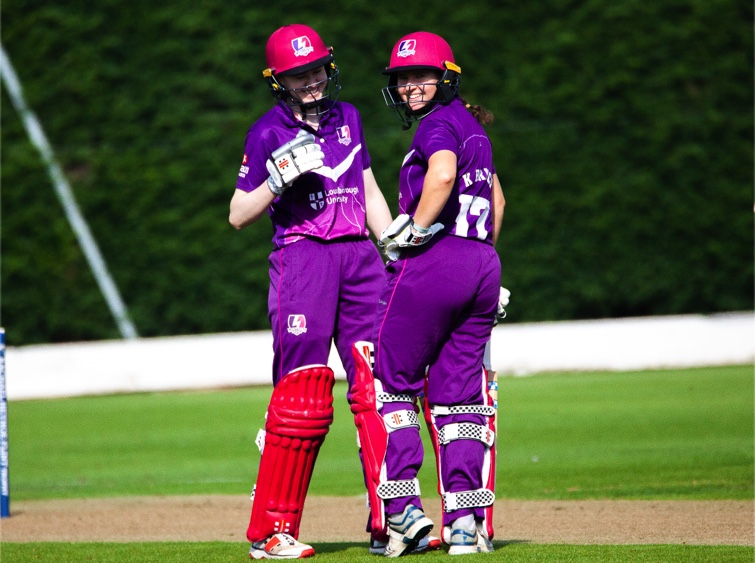 Lightning team (360 for 6) finish the Rachael Heyhoe flint trophy on a high as they beat Sparks (296 for 6) with a Lightning record 207-run sister partnership.

With fans back at Loughborough’s Haslegrave Ground for the first time this season, the Lightning team were far from disappointing, with the Bryce sisters putting on a show and dominating Haslegrave.

The sisters shared a 207-run partnership for the second wicket between them, not only being a Lightning record, but the biggest run partnership seen this season. Sarah Bryce posting 90 runs and Kathryn Bryce on a career-best 162 runs, no-doubt helping lead Lighting to their game victory.

After Sarah was unfortunately dropped on five, we saw Abbey Freeborn, Beth Harmer and Ella Claridge dismissed quickly after. Following these rapid dismissals, for the last five overs, we saw Lightning’s Sonia Odedra help Kathryn add 63, before Bryce’s three-hour reign was dismissed in the final ball of the batting innings.

The victorious ending seemed evident by the time the second innings got going, in fact the only way Sparks were to win this game and advance straight into the final was to exceed Lightnings season-high 320 for 6 in 40 overs, which seemed impossible and rightly so.

Although unable to pick up an extra point for the table, Sparks had a great performance in their batting innings. Also providing the crowd with their best batting this season. But despite great runs from Sparks’ Marie Kelly (62) before stumped by Yvonne Graces and Eve Jones (60) caught out by Kirtsie Gordon, they were short 24 runs, which meant that Lightning ended up on top for their final game of the Rachel HeyHoe Flint Trophy.

With Lightning’s performance spoiling Sparks’ chance of blitzing straight to Saturday’s final, Sparks will now face Diamonds in a playoff on Wednesday to decide who advances to the final against Vipers on Saturday at Northamptonshire's County Ground.