Lightning stung by Wasps in London 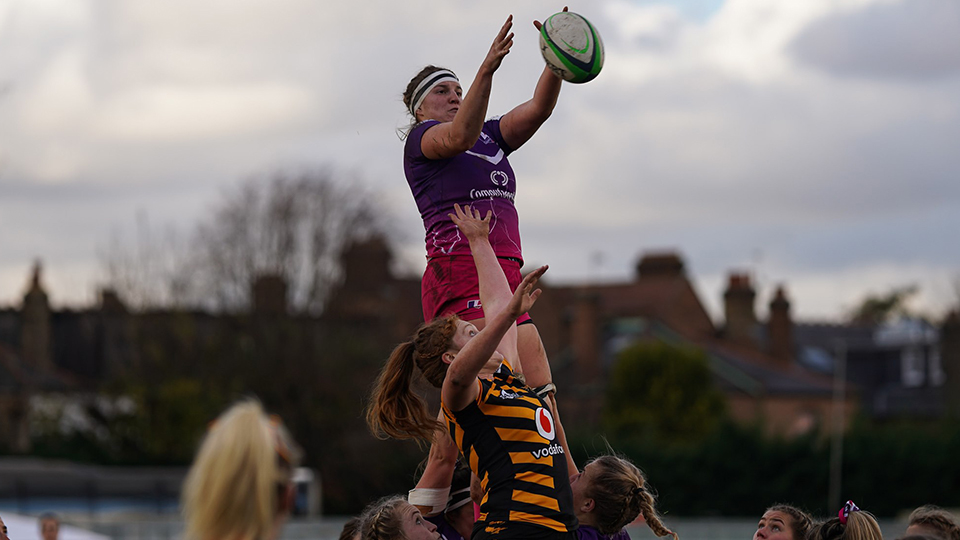 It was a confident Lightning side that took to the pitch on Saturday following a substantial win over DMP Sharks the weekend before. It was, however, not to be their day, as they fell to defeat 10-21 at Twyford Avenue.

~aqLightning look threatening from the off, attacking fiercely through the forwards, allowing the backs to be released down the wing early. An electric run from Rhona Lloyd took Lightning into the 22m early on, however, small mistakes gifted Wasps the ball.

Putting on an impressive defensive effort Lightning restricted Wasps to their half for multiple phases. The pressure could only last so long, as a quick tap penalty saw Abby Dow burst through the Lightning defence and force Helena Rowland to chase the winger back and make a try-saving tackle. Reaching the ruck first the Wasps attack capitalised on an unorganised Lightning defence, diving across the whitewash, securing the first score of the game.

Retaliating quickly, Lightning’s forwards battered the Wasps defence on the try line, tightening the home side up and making space out wide for Rhona Lloyd to dot down in the corner. The conversion was unsuccessful, and Lightning trailed by 2 points.
The half continued with Lightning camped on the Wasps try line, however, handling errors plagued the side as they failed to make the final push across the line.

With seconds to go in the first half, the Wasps defence finally cracked, and Lightning’s rolling maul marched across the line, edging into the lead 10-7 as the half time whistle blew.

Moments after the whistle blew to start the second half Wasps stung Lightning. Catching Lightning napping in defence, the home side’s backs weaved their way through the defence and crossed the try line. Megan Jones added the extras and Wasps took the lead.

It was Lightning’s turn to defend the try line as Wasps mounted the attack. Showing her impressive strength Morwenna Talling lead the defence, forcing Wasps to hold on and earning Lightning the penalty.

The pressure was only released for moments as Wasps gathered the clearance kick and resumed their barrage on the line. A Lightning penalty in the ruck allowed the home side to kick for touch.

A clinical line out from Wasps saw them drive the ball across the line from 5m out, extending their lead.

A final attacking flourish from Lightning saw Ella Wrywas dart through a hole at the ruck, taking her team into the Wasps 22m.

It was too late for the away side to convert, however, as the lineout was over-thrown, allowing Wasps to end the game victors, 21-10.