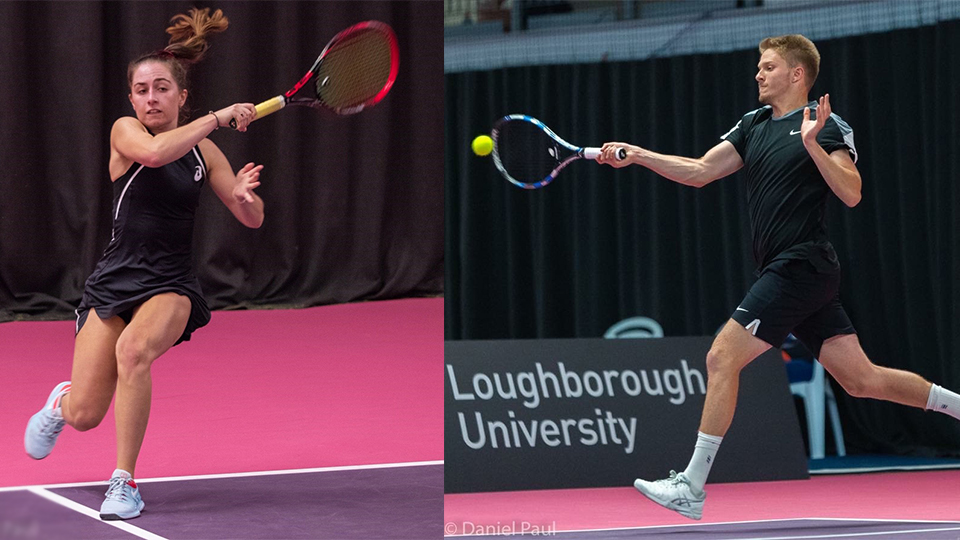 Loughborough Tennis is delighted to announce that both Ella Taylor and George Houghton have been called up to the Great Britain squad for the upcoming BNP Paribas Master’U event in France.

Selected by BUCS (British Universities & Colleges Sport) and managed by the LTA, the national governing body for tennis in Britain, both players will form part of the six-member squad representing Great Britain. To be eligible for selection, players must be able to represent GB and currently be studying in higher education anywhere in the world.

The team will travel to Grenoble ahead of competing between 29 November – 1 December and will play a series of matches against other nations, including singles, doubles, and mixed doubles.

Each match will consist of seven rubbers where players will be awarded one point per victory, with the first team to win four rubbers progressing to the next round.

Ella, who is also studying for a masters in Strength & Conditioning at the University, said:

“It’s really exciting to be selected as this was one of my main goals for the year. It’s great to be picked to play for the GB University team and it’s also nice to represent Loughborough on the world stage as well.

“Both the girls’ and boys’ teams are really strong this year and it’ll be tough for a lot of countries to have the depth we have. I think we have a really good chance of doing well and I can’t wait to get started.”

George, who is a third-year Sport and Exercise Science student at Loughborough, added:

“It’s an unbelievable feeling to be selected and I’m really proud to be able to represent my country. I was selected for the same event last year but sadly had to pull out days before due to illness, so it’s a real relief to be picked once again.

“There will be a certain level of expectation as GB has performed so well in recent years, but if we manage to manage to medal, we would have certainly done ourselves proud.”

Following the selection of both Ella and George, Performance Coach Tom Kisiel added:

“I am delighted for George and Ella to be selected for this event and it’s a real testament to the hard work they’ve been putting in. Being selected to represent GB is something they should be very proud of.

“This is the first time Loughborough has had two players selected in the same team which is something we are incredibly proud of. Selections such as these will only help with us increasing our profile and reputation on the world stage.”

Great Britain has enjoyed recent success in this tournament, winning in 2017 and securing the runners up spot in 2018.