England Roses stars set to return to Lightning in 2020 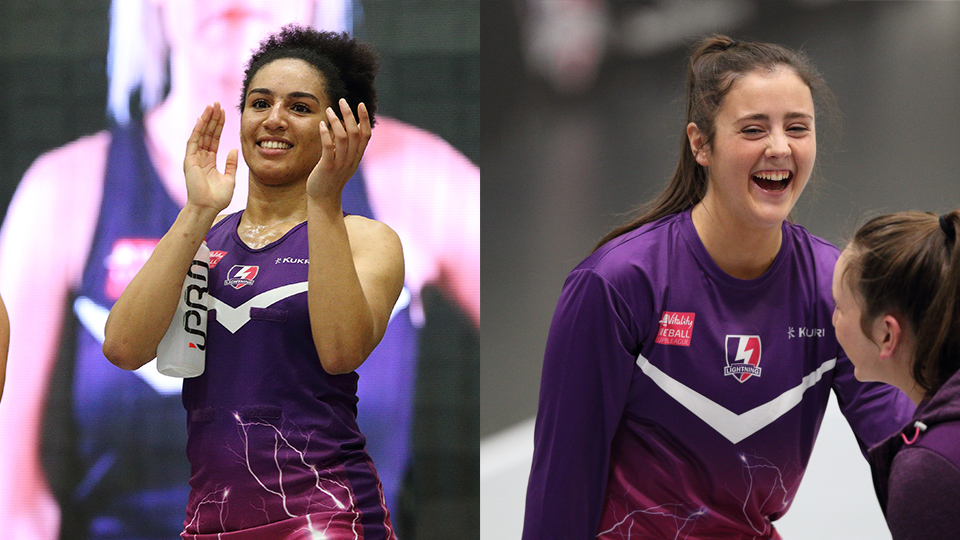 Loughborough Lightning is delighted to confirm that England Roses athletes Jess Shaw and Vicki Oyesola will return to the fold for the upcoming 2020 season.

Shaw has gained a place in the full-time national programme for 2019/20 and will combine her national commitments alongside her training with Lightning, both of which take place at Loughborough University.

The 23-year-old mid courter made the move to Lightning in 2018 after plying her trade at Team Bath. After a successful first year with the side, it seemed the obvious option for Jess to return in 2020, as she explains:

“I loved my first year with Lightning and how accessible everything is. I think it has one of the best setups in terms of having everything you need all in one place.

“When you have top mid-court coaches and world-class players training with you day in and day out why wouldn’t I come back? I learned so much as a player last year but there’s also still so much for me to learn.

“The team has so much potential and I’m really excited to build on last year’s performance and getting out there to show people what we’re capable of.”

Also joining Shaw in the 2020 side is defensive powerhouse Vicki Oyesola. Returning for her fourth season with Lightning, Oyesola made her mark with Lightning from day one, earning her first senior England cap in 2017 and collecting the VNSL Young Player of the Season Award in her debut season.

In 2020, Oyesola will take her place as one of the more experienced players within the squad, bringing back a wealth of experience whilst balancing studies, training, and national commitments.

Heading into her fourth year of a Mechanical Engineering Degree at Loughborough University, Oyesola shared her top tips for balancing it all:

“It was always going to be a challenge being a student-athlete and managing my studies and training, but there’s a great support system here at Loughborough. It’s just about communicating with coaches and lecturers to make sure everyone is on the same page, planning ahead and working hard.

“It’s really exciting to be signing for my fourth season, we’ve built a lot over the years and I’m looking forward to getting back in the mix and going for another season. Hopefully, we can build on the connections we made and the team environment we created from last season, and go one step further and make the final this year.”

Head Coach Sara Bayman expressed the impact the two key players will have within her squad for the upcoming season:

“Jess and Vicki were integral to our team last year and they will be looking to push on even further this year, as they come back to us as England athletes. It was crucial for us to keep the core of our team and hopefully, these two will pick up where they left off last season.”

Jess and Vicki are the latest additions to the 2020 side with the final player still to be revealed. Keep your eyes peeled to find out the final line up for Lightning’s upcoming campaign.

Lightning’s pre-season fixtures have also been announced with the home side welcoming the likes of Team Bath, Wasps, and Knights Men’s Netball to campus in the new year. With two of the three fixtures open to season members only, the only way to secure your seat for all three matches is to become a member today.

There are still a limited number of season memberships available to purchase so why not secure your seat for the whole season before it’s too late. More information can be found here.