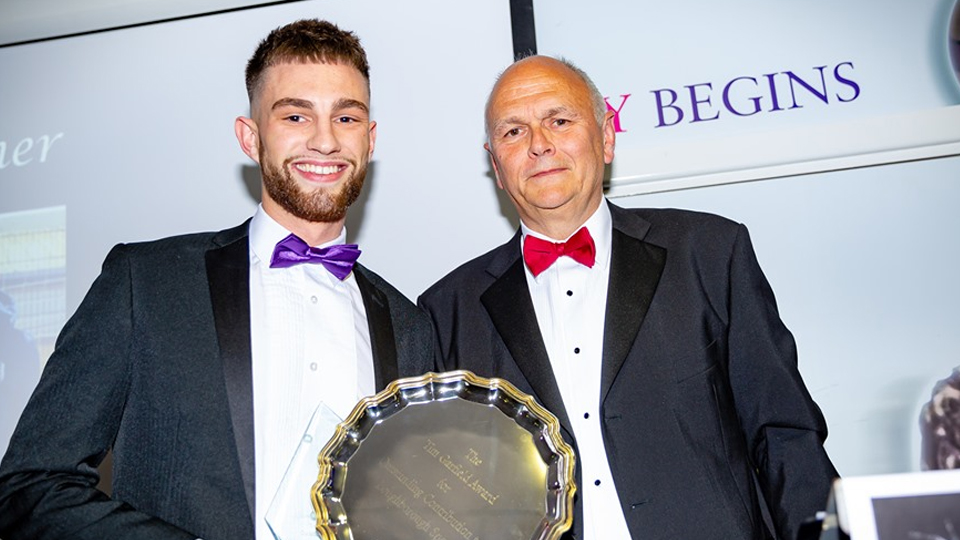 The premier award of the evening, ‘Outstanding Contribution to Loughborough Sport’, was presented by former Deputy Director of Sport Tim Garfield to this year’s winner, Sam James.

Sam has volunteered hundreds of hours predominantly as a football coach for the ever-growing Loughborough Students Women’s football club but has also engaged with opportunities on the CVA committee as well as volunteering at multiple events.

In the 2018/19 season, Sam went from being the coach of the second team where he helped the side win BUCS silver to Head Coach of the whole women’s program managing four teams, coaches and staff alongside duties as the first team coach. Managing all of this whilst finishing off his final year in Sports Science was no easy task.

From recruiting a team of sport science volunteers, coaches, nutritionists and sports massage therapists, Sam formed a new professional and competitive environment. This enhanced support from a rounded performance team helped to drive multiple improved performances across the club; the fourth team won promotion, the first team reached the BUCS Cup Final for the first time in seven years, and the second team were within two points of winning their league.

Sam has also invested a substantial amount of time into pastoral care of the players, meeting with club members daily, acting as a sounding board for personal issues and checking in when he knows there are stress points.

For these reasons, Sam deservedly received the award.

“Sam leading our women’s first team to this season’s BUCS Championship final represents a transformation in the club’s success on the field. However, off the field has been where his leadership has made an even greater impact. He has nurtured a group of coaches with little experience into an outstanding team who deliver a first-class sporting experience for members across all tiers of the club.”

“Sam has done an outstanding job this season. On and off he’s led the Women’s program incredibly well and it’s no secret that the game is growing at a massive pace with the World Cup just weeks away. Sam’s commitment is testament to programme we now have at Loughborough and the performances speak for themselves including reaching BUCS Final, which was an amazing achievement for everyone involved. Sam also played a part in supporting the wider football offer and became a very important part of football at the University.”