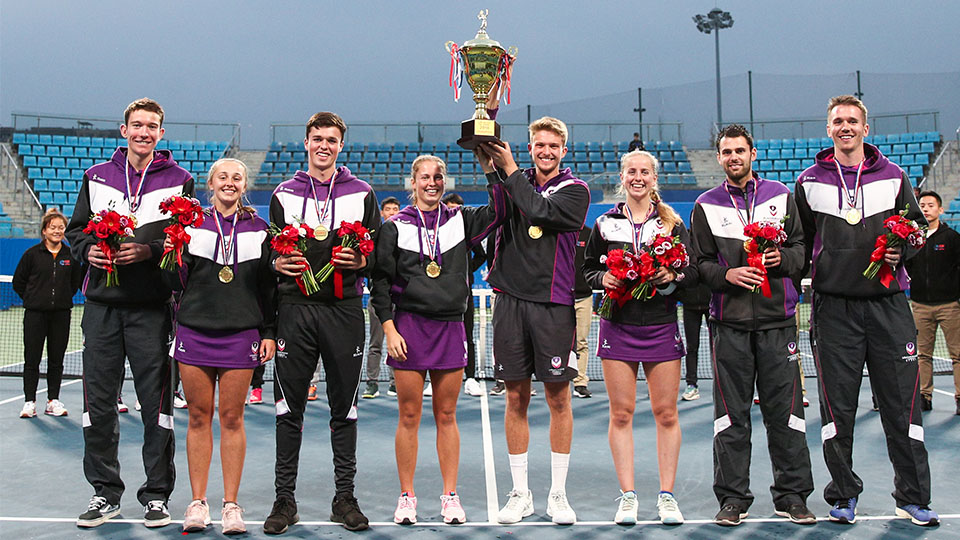 The victorious Loughborough tennis team at the Belt and Road Tournament in Chengdu, China.

Loughborough Sport Tennis is celebrating a record year, including a 227 percent increase in its student participation programme.

Over the past four years, the number of those playing tennis has grown from an average of 199 players per week to over 650 participants per week in 2018/2019 academic year.

Figures also show that 14 local primary schools have engaged in free coaching sessions, which equates to an average of 389 students per week involved in its thriving mini tennis initiative.

Speaking about the number of milestones achieved, Director of Tennis, Helen Reesby, Said:

“This year has been a fantastic year for Loughborough Sport Tennis. Our vision at the start of the tennis project in 2015 was to create a vibrant tennis centre where players of all levels can enjoy tennis, develop skills for life and achieve their tennis ambitions.

“This vision, through the hard work of the tennis team, CVA, student coaches, volunteers, and Athletic Union Tennis Club has become a reality. We are immensely proud of our students and with their support, the tennis project has achieved great things.”

“Loughborough Sport Tennis continues to set the highest standards across the board as these achievements show, making it now one of the market leaders in the delivery of tennis in Great Britain.”

Loughborough Sport Tennis Centre is open to everyone, and those wishing to get involved can visit the website here for more details.