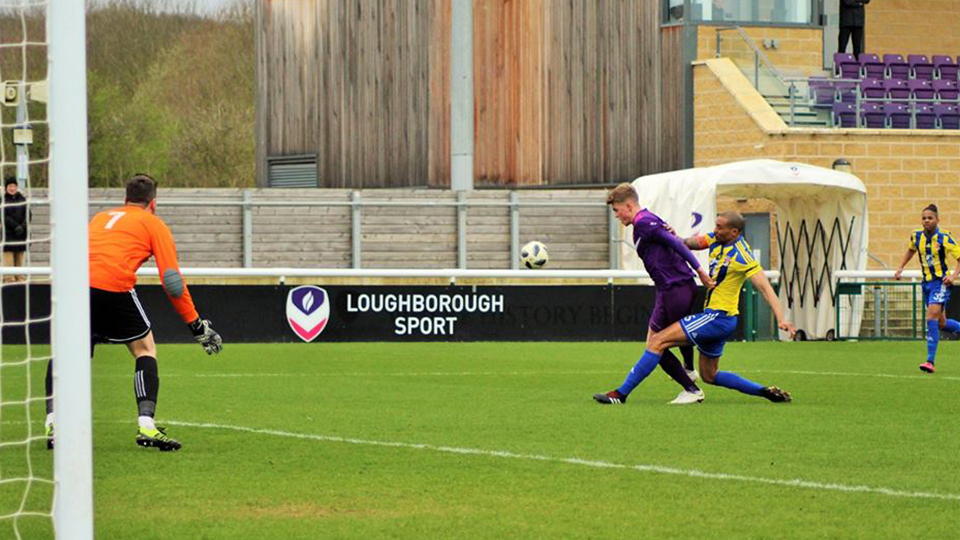 Loughborough claimed all three points on Saturday as they beat Sporting Khalsa by two goals to nil at home. The 3 o’clock fixture saw The Scholars, who were down to 17th in the league after a succession of poor results, host 4th placed Sporting Khalsa. The commencement of the game was subject to a 10am pitch inspection which was suitably declared fit for the match.

The team news would likely have turned a few heads as Coach Ackerley made a series of tactical tweaks in what proved a fruitful attempt to upturn the recent run of form. Central defender Joe Jackson was employed in the midfield whilst regular starter Ben Last was dropped to the bench and Dan Hanson was missing from the squad altogether.

The match began with The Scholars on the front foot. In the first minute, forward Connor Smith had a penalty appeal waved away and shortly after an effort on goal that was dealt straightforwardly by the Khalsa goalkeeper. The beginning quarter of an hour saw Loughborough dominant on the ball but mostly kept to shots from distance. It wasn’t until the 16th minute that Khalsa began to stamp their mark on the game which was done through an illustrious piece of interplay down the left that worked the ball into the box and found the side netting, causing brief concern among the Loughborough supporters.

However, The Scholars’ continued to utilise space effectively and work the ball which almost resulted in a goal for Dan Collins had it not been for a goal mouth clearance. Loughborough made the most of their next opportunity as Connor Smith bagged hist first of the game in the 26th minute. A poor kick from the goalkeeper found Dasaolu in the final third who picked apart the Khalsa defence with his pass to Smith who smashed it home beating the onrushing keeper and putting the team in the ascendency. A second penalty shout was ruled a fair challenge late on in the first half as Smith once again went down in the box under pressure from the back-tracking defender having been played through on goal with 40 yards to go. The Loughborough players and fans alike vociferously voiced their displeasure at the referee’s decision but their calls fell on deaf ears and shortly afterwards the halftime whistle was sounded.

The second period of play began much the same as the previous forty-five with Loughborough attacking with plenty of the ball. Few chances were seen from either side until the 67th minute when Smith crossed the ball from the left into the box reaching the stretched Crookes whose effort was brilliantly denied by the keeper. Smith doubled the lead in the 69th minute after Dan Collins capitalised on a defensive error and brought the ball forward into a dangerous position. The ball eventually wound up at the feet of Smith, having travelled through Crookes, and the man of the match slotted it home.

The remainder of the game was open and fast paced. Khalsa began to express themselves more in an effort to make a comeback while Loughborough exploited the defensive high line and carved out opportunities for themselves. A strong display from the defensive unit, including a couple superb saves from Hobbs and a goal line clearance from Charlie Lewis, ensured Loughborough the clean sheet and the win.

The victory was much deserved for The Scholars against a higher positioned club in blustery conditions and will give the team confidence going into the business end of the season.