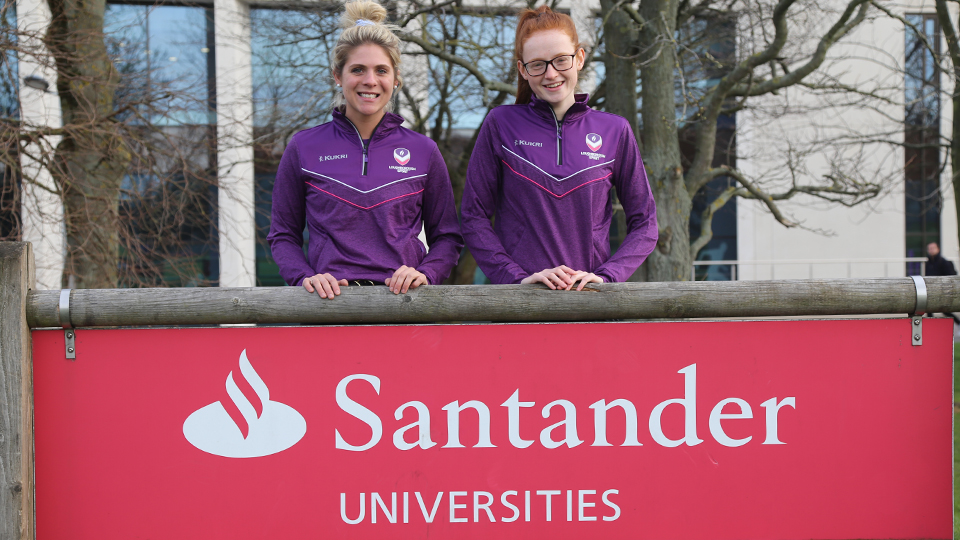 Two Loughborough University female footballers Carly Perry and Rebecca Ruscoe will embark on a trip of a lifetime to Barcelona’s legendary Camp Nou stadium in March as part of Santander UK’s initiative to support female talent in both their sporting and professional lives.

Carly Perry and Rebecca Ruscoe are two of a select group of leading footballers from women’s football clubs at UK universities who will join a programme of events, tours and training.  The programme, organised by Santander Universities, is designed to help build critical thinking and management skills for female talent, both through sporting and wider leadership activity.

Carly Perry and Rebecca Ruscoe will also have the opportunity to benefit from a training session with Chapi Ferrer, professional football coach and ex-player of both FC Barcelona and Chelsea FC. In addition, in celebration of Santander’s sponsorship of the UEFA Champions League Cary Perry and Rebecca Ruscoe will have the chance to watch Lionel Messi, Luis Suarez, Gerard Pique and their Barcelona team mates play in the club’s vital round sixteen tie against Olympique Lyonnais.

3rd Year Sports Science Student Becca Ruscoe said of the trip “I’m so excited for our trip to Barcelona and see it as a massive opportunity for not only myself, but Loughborough Women’s football club and Women’s football in general. It’s amazing that Santander Universities have recognised the Women’s game and are supporting it in its growth. It will be an unbelievable experience to be coached by an ex-professional player and the coach of FC Barcelona Legends, as well as being able to engage in a thought leadership session run by Santander. Being able to watch Barcelona in a Champions League knock out game as well, are all things I thought I would never be able to do, and I am so grateful to everyone involved for allowing this trip to happen.”

Director of Football Richard  Allen commented ‘We are delighted that Santander has given two of our student football players the opportunity to visit Barcelona on a fantastic three day trip.  Our women’s football programme here at Loughborough has gone from strength to strength over recent years and we are focused on building on this foundation going forward. The experience that Carly and Rebecca will have this week will be a life shaping stage within their journey here with us at Loughborough.’

Matt Hutnell, Director, Santander Universities, said “We are thrilled to offer this opportunity to top female football talent from across the UK to help develop their leadership skills, both within and outside a sporting context.  We are committed to supporting higher education and we know that those selected for this programme are equally committed to their sport, investing hours into training and are an inspiration to their peers both on and off the pitch. We hope the trip will motivate and support female talent with their career ambitions – whether in the world of sport, finance or beyond.”

Emilio Botín launched Santander Universities in Spain in 1996, as an effective vehicle for business investment into its communities.  The programme now has over 1,200 University partners across 20 countries. Santander Universities UK launched in 2007; encompassing 84 universities, and providing over £10m of funding in 2018 alone. The programme focuses on education, entrepreneurship and employability giving all students the opportunity to succeed.