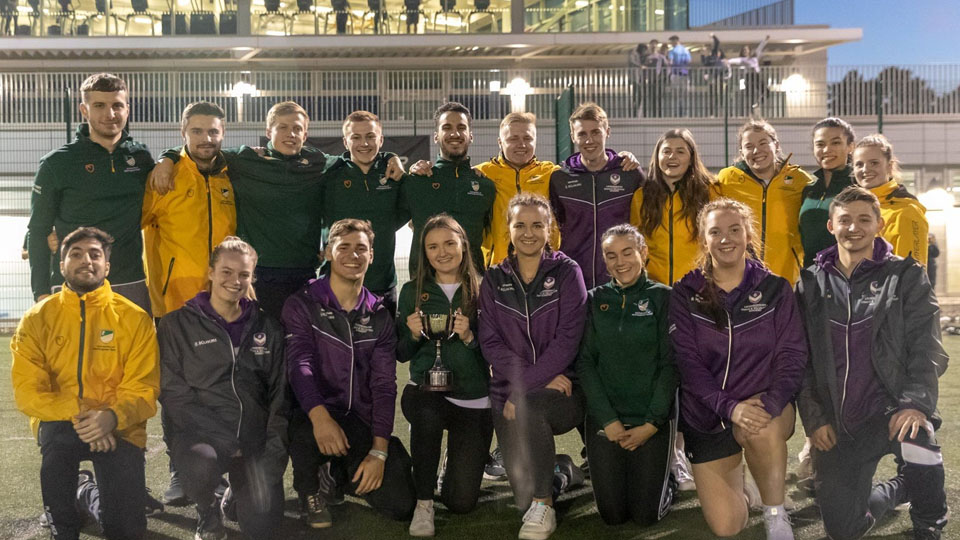 On Wednesday our Intramural Sport teams made the trip over to Nottingham to compete in their annual IMS Varsity. Last year was the first year Loughborough suffered a loss, so this year the Loughborough cohort were striving to take back the IMS Varsity crown.

The Nottingham Varsity comes off the back of a dominant display at Durham winning the respective varsity. Despite, morale being high, it wasn’t the easiest of starts for our IMS sides with Nottingham coming out strong from the get-go.

The first set of fixtures kicking off at 3pm did not fare well for Loughborough suffering defeats in the Men’s Hockey, Squash and Tennis. In Women’s Football Loughborough narrowly lost in a game that went to penalties, 5-4.

However, not all was lost, as our Pack Super Series team fought hard and took the win after their destructive displays of rugby throughout our Super Series tournament thus far. With Nottingham 4-1 ahead it was vital that Loughborough fought back and found their feet, none other than John Phillips reignited our dreams with a euphoric 5-4 win in Badminton, showing that we were still a force to be reckoned with.

In Futsal, from the start Loughborough put in a strong performance and it looked like the tide was finally turning with specks of purple and pink flashing through, a 11-2 emphatic win which secured our fight back.

The fight back continued with Women’s hockey with a huge shift by all the players saw us take the overall score back to 4-4. With hopes high and the dream still alive, our fate relied on our performance in our second half of the days fixtures; Netball, Football, Volleyball and Basketball.

With the score 5-5 it was must win matches in both Men’s Football and Basketball. An early 2-0 lead in men’s football before half time meant all eyes turned to Men’s Basketball as the trophy decider. Nottingham kept a steady lead throughout and although Loughborough fought back it wasn’t Loughborough’s day to be and Nottingham took yet another win with a 61-55 score overall, the atmosphere in the hall was electric.

No matter what happened at the Football, Nottingham had already secured the trophy was staying well locked away in their cabinet, but this did not stop Loughborough from putting in an exhilarating performance in football and taking a win.

Overall, spirits were high after each team representing Loughborough had poured everything into each minute of their fixtures. We will be ready to go again next year and by then we will ensure our best chance of bringing home the trophy.

Until next year, see you Nottingham!