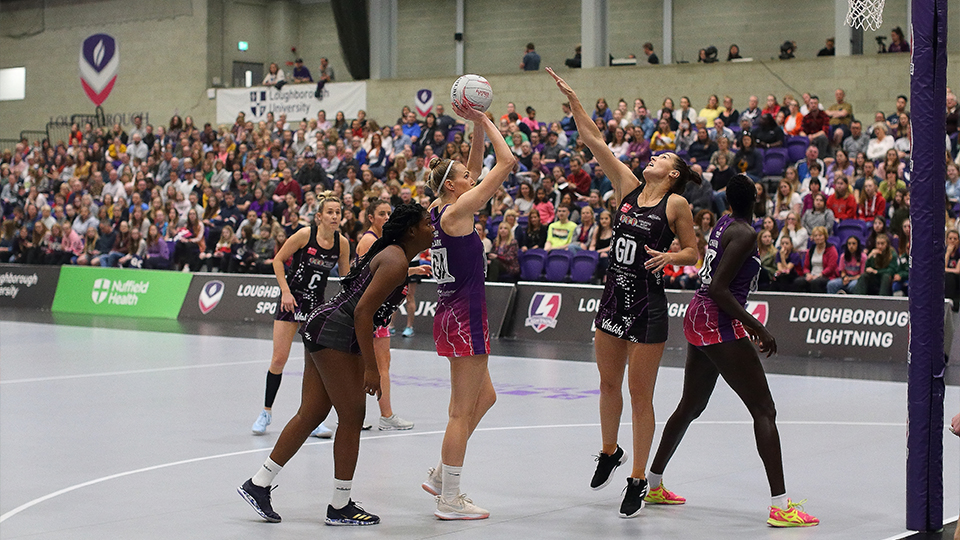 Loughborough Lightning stole the show on Saturday night claiming their seventh win in a row with a 54 – 49 victory over Saracens Mavericks.

Lightning began the game determined in front of a 900 strong home crowd. After a last-minute victory away to Severn Stars they were keen to push ahead and take the game at their own pace to get ahead early. Both sides converted their opening centre passes despite three interceptions during the first centre. The scores remained level for much of the quarter as Lightning looked to keep their calm and open up holes in Mavericks attack.

As the game progressed into the second quarter both sides increased their physicality in an attempt to force error. Multiple contact calls were made in Lightning’s shooting circle but Cholhok and Clark remained unphased and continued to sink their shots. With Panagarry providing critical support on the line, Shaw and Joseph worked the ball around before sending it over Mavericks defence into the shot line. Down at the far end Keenan and Oyesola had begun to read the incoming pass and push Corbin out wide to force the long bomb shot. The first half ended with Lightning trailing by just three.

A huge third quarter was needed from the home side to close the gap and get past the visitors. Mavericks made changes to their shooting line-up whilst Lightning chose to stay the same and push on. The fans were treated to many a turnover however Lightning struggled to hold on to the ball. The final five minutes of the quarter saw them close the gap and level the score. The whistle sounded and Lightning trailed by just one.

Remaining unchanged as the final quarter began, Lightning ignored Mavericks need to regroup and pushed on. With a deficit of just one point the game was far from over. Taking her chances from wide in the circle, Clark sunk shot after shot, impressing the fans with her basketball style shooting. Meanwhile Panagarry amped up the volume and pace to drive her side through the final 15 minutes. Showing pure grit and determination Lightning pushed past Mavericks in the final five minutes to take the lead and secure a 54 – 49 victory.

Gaining herself Player of the Match with another impressive performance on court, Nat Panagarry recognised the importance of a strong home crowd;

“This season the crowd has been absolutely amazing, to everyone that comes in week in week out, we hear you constantly and we can’t explain how much of a difference it makes in pushing us right to the end.”

Head Coach Sara Bayman commented on the push from her side to close out the game;

“I’m really pleased with their performance in the second half, we knew a quality side like Mavericks were going to push us for the entire 60 minutes. I think now we need to look at how we start the game how we finished it, we made really hard work of the first 30 minutes. I think because the last few games have gone down to the wire, it gives us a sense of belief that no matter how tired we are we can go out and win them so that was the message to the girls at half time.”

Lightning are back at home on Monday 8th April welcoming Surrey Storm to campus live on Sky Sports. Tickets to the clash are selling fast so secure your seats now by visiting www.loughboroughlighting.com

To view all the photos from tonight’s match visit www.stillsport.com/Loughborough