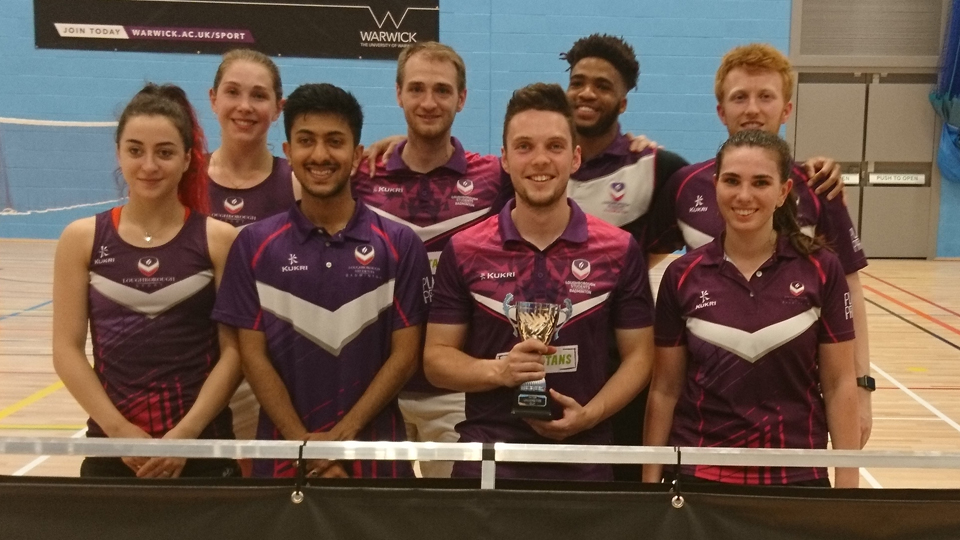 Loughborough Badminton claimed victory in the first ever Inter Universities Cup hosted at the University of Warwick. A brand new event for this season and the first inter-university event involving men and women within the same team.

Generally,  the BUCS championship is separated into men's and women's competitions but a different format was taken with matches being played best of 3 to 15 with no setting. Each team match consisted of 5 matches - one of each event, men's singles, women's singles, men's doubles, women's doubles and mixed doubles.

The second pool match against Cardiff Met finished with a 5-0 win. Sam Ricketts got the team off to a good start with a win in the singles. This was then followed up with solid straight games wins for Lizzie Tolman & Viki Williams in the women's doubles and Evie Burbidge in the women's singles which firmed up the win before David King & Harley Towler and Matt Clare & Viki Williams completed the whitewash in the men's doubles and mixed respectively.

As a seeded team, a bye then took us into the semi-final to face East Midlands rivals, Nottingham. In the knockout stages matches ended as soon as a team reached 3 wins so there were no dead rubbers. Harley Towler and Sam Ricketts got us off to a winning start in the men's doubles. This was then followed up with yet another women's doubles victory for Tolman and Williams and then Sahil Sipani wrapped up the win 3-0 in his men's singles match.

In the final, Loughborough faced another East Midlands rival in Derby who boasted former Malaysian International Lyddia Cheah and England capped Kirby Ngan in their side. The final began with a very competitive 2 game win for Matt Clare & Viki Williams in the mixed against Ryan Quek and Lyddia Cheah. In the women's singles, Kirby Ngan was too strong for Evie Burbidge and levelled up the match for Derby. Sahil Sipani produced a good performance in the men's singles to beat Henley Ngan with the second game going to sudden death. This put is 2-1 up and needing one more victory which Viki Williams and Lizzie Tolman duly delivered with a 3 game win against Ngan and Cheah.