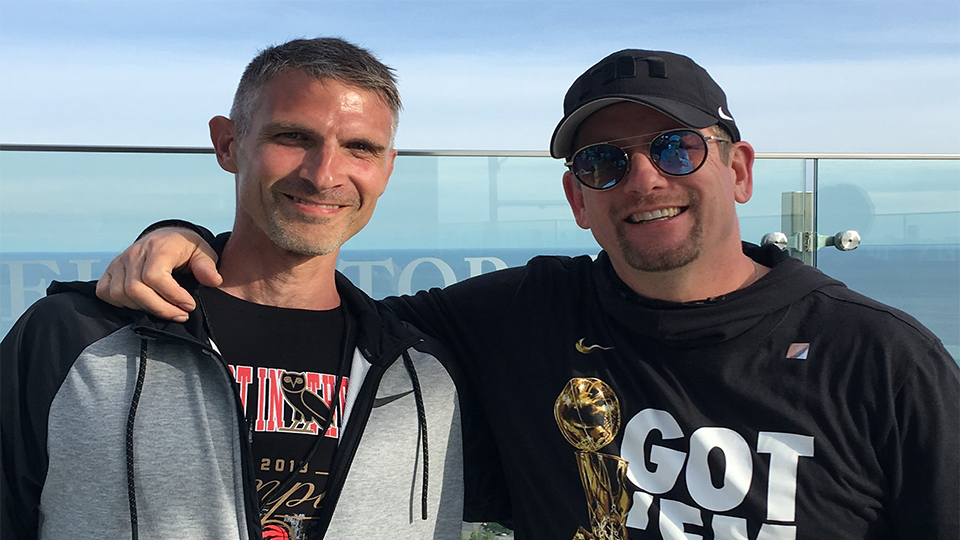 Loughborough London’s Dr Steve Swanson has recently been a part of the Toronto Raptors’ title run to become the first non-American team to win the NBA Championship.

Dr Swanson, Director of the Sport Business and Leadership MSc programme, came to know Head Coach Nick Nurse through coaching together in Brighton in the early 2000s and remained friends as they led rival teams in the British Basketball League.

Steve has kept in close contact with Nurse over the years, and during this season in particular (Nurse’s first as an NBA Head Coach), exchanged thoughts relating to leadership, innovation, and championship mindsets.

Upon reaching the NBA Finals, Steve was invited by Nurse to be a part of the team’s historic best-of-seven series win over the Golden State Warriors. Reflecting on this experience, Steve shared:

“To have the opportunity to witness this tremendous run by the Toronto Raptors has been an unbelievable experience. Coach Nurse’s innovative and contemporary leadership approach has played an integral role in propelling this club to their first-ever championship. Witnessing millions of diverse people come together to support and celebrate this team is a true testament to the power of sport and its ability to unite communities, and in this case, an entire nation.”

Dr Swanson was previously an invited guest to the Raptors pre-season training camp in Vancouver, as Loughborough University looks to strengthen its working relationships with global sporting brands.