Victoria Burgess: My fight with Cancer 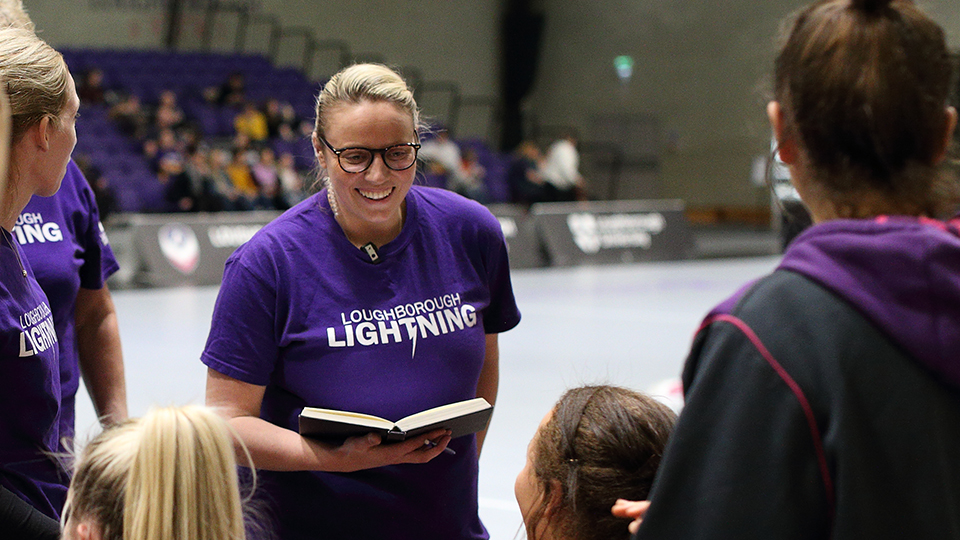 In early 2016 Victoria was diagnosed with ovarian cancer, but thankfully has since had the all clear and is back courtside making a positive impact on athlete development in the UK.

Victoria sat down to share her journey ahead of Lightning’s charity game for Cancer Research UK on Saturday 2nd February in the hope to raise awareness and to thank the people who supported her road to recovery.

LET’S START AT THE BEGINNING...

‘On 17 December 2015 at the Oaksway Christmas Ball I squeezed into a blue sparkly dress. For those who know me, this is not my usual occasion attire, but as it was Christmas I thought I would make a real effort. The night started well, spending time with friends and family from the club, until I felt sick and in pain. I only managed to eat about four mouthfuls of the three-course meal.’

‘Later that week I came home from coaching the last session before the Christmas holidays, slumped on the bed and relaxed. As I was lying there I could see that my stomach was protruding and I looked more bloated than I had ever been. I put this down to my menstrual cycle and tried to ignore it.’

‘After spending the Christmas holidays back at home in Hartlepool, I felt bloated and uncomfortable most of the time but ignored it. I knew something was not right but didn't know what. I stood washing the dishes and was thinking about how crap I had been feeling over the past four weeks and something clicked… I needed to call the doctor.

On 31 December 2015 I called the doctor at 3:03pm and they booked me an appointment for 3:10pm. '’Can you make that time? It's the only one we have today.’’ We jumped into the car and drove to the surgery, where a fab doctor called Dr Thompson examined me. She decided to investigate further and refer me for a scan, suggesting that there may be some fibroids within the uterus, which worried me and put a bit of a downer on the New Year’s celebrations. At the stroke of midnight leading into 2016, I knew I was in for a ride.’

‘On 3 January I was delivering a coaching session in Loughborough and working a long day with National Academy athletes at camp. After an early start and finishing at around 6pm I felt horrendous, tired and bloated and I had totally lost my appetite (which is not a usual occurrence). To try and wake myself up I decided to go to the gym. After the session I was so tired I went straight to bed (which again is not like me, I would usually be a bit more social with the other coaches). On 4 January I woke up feeling awful. Nauseous, sore, bloated and most of all worried. I had another full day of coaching to get through. I walked into the breakfast dining area to say good morning to my colleagues and broke down in tears with worry. They immediately sent me home and told me to take care of me first - So I did. When I returned from Loughborough I headed straight to see Dr Thompson and she sent me straight to Cramlington hospital, where I spent the whole evening getting examined. At first they thought my bladder wasn't working. After scratching their heads through the night, and me gradually getting more and more impatient with the length of time it had taken (six hours), they decided to send me for an ultrasound scan the following morning. I was not expecting to hear what I heard when the results came back. ‘’'There is a cyst, a rather large cyst, on your left ovary. It measures 21cm long, 12cm wide and 17cm deep.’’

‘I sat on the hospital bed not knowing what that meant or what happens next. All I knew is that I wanted whatever was in my body out asap! After two weeks of knowing I had this horrible foreign body on my ovary I was drained. I wanted to get back to normal life. I met with a consultant who explained everything very clearly and I knew the plan: get the monster out!’

GET THE MONSTER OUT DAY!

‘The surgery went well, although I had to have a laparotomy (C-section) to take out the huge cyst along with my ovary and left Fallopian tube, which the cyst had destroyed. It was now time to recover. I was so happy to be back on the road to recovery. The cyst was out and I was a few pounds lighter. I had lost an ovary but I had another, so I was happy!

After surgery whatever is taken from you (in my case, my cyst) is taken to the lab for testing to check if there are any unknowns within the mass. These are called tumour markers. Three weeks after the operation I was called into the surgery to get the results of the histology report. I was hoping for an all clear, after the number of doctors, consultants

and nurses who had said to me: ‘’The likeliness of this being anything sinister is very low, you are so young’’. I was asked to make my way to a quiet room and as soon I walked in I knew there was something not right. I was told the report had come back with something they were not happy about. The mass and histology report had been sent to a specialist hospital for further testing. More emotion: I wanted this to be over and it wasn't…’

‘I was at Team Northumbria’s first Vitality Netball Superleague home game of the season at Sport Central. It was the first game I was able to make because of my surgery, which as the Assistant Coach I was gutted about after having spent five months working towards the competition. I received a voice message asking me to attend a meeting the next day (1st March), to speak with the consultant. I think at this point I knew something wasn’t right. I found myself a quiet room and cried with panic. Luckily, two of my friends walked past and caught me and talked me round to a calm state. I put it to the back of my mind and focused on netball.’

‘We turned up at the hospital at 8:30am for our 9:00am meeting with the consultant. My name was called and we found ourselves sat in a room with a lovely lady and a nurse sat behind her (for moral support, I'm guessing). I was shown a piece of paper with a picture of the lower half of a female skeleton with a uterus and ovaries. My surgery was explained and I was told that they had found a mucinous ovarian carcinoma within the ovary. And then at the top of the piece of paper she wrote ovarian cancer. Ovarian cancer. Instant disbelief, fear, panic… emotional. All those feelings came rushing at once! Am I going to die? How did this happen? Why? What did I do? My mum is going to be so upset and worried about me! These were my first thoughts. Then I could not tell you a word the doctor said. It was like I wasn't there. We made a plan to go for a CT scan to see if the cancer had spread (this was the longest two weeks of my life). I learnt that during the surgery the cyst had burst within my abdomen, which added further risk of the cancer spreading.’

‘I was sat in the colposcopy department at 9:00am waiting to see the consultant.

We sat down in the meeting room and my consultant was great – she seemed upbeat and announced that the cancer had not spread, which was a huge relief. But they had found another cyst on my right ovary. I was upset as I thought the worst straight away; that I'm going to have to have a hysterectomy before I've had the chance to have kids. The cyst was 4cm and we decided to get a better look at it on a scan. Overall the meeting had been positive and I seemed to have been lucky that the cancer hadn’t spread to my uterus.

The scan showed that the cyst on the right side had shrunk, which was awesome news! Back to the plan... On 18 April 2016 I was scheduled in for completion surgery, which was fertility sparing. This meant the surgeon would save my right ovary and uterus, but take out anything that cancer likes to attach itself to. This keyhole surgery was preventative treatment. The next day I was told the surgery went well and that I could go home to recover. After the operation I spoke to the oncologist who gave me the option of chemotherapy. I was told the odds and the risks. The chemo I was offered would have lowered my chance of further cancer by 3%. After taking some time to assess everything,

I chose no chemo and my oncologist was happy with my choice. I decided to have close observation and reviews instead.’

‘Since the operations I was trying to recover and found it really difficult, emotionally and physically. I had scars on my stomach and abdomen and I ached constantly. Through all of the tough times, I tried to shift my focus onto coaching. Having that distraction was great for me and I don’t know how I would have got through it without the support from my coaching/work colleagues and my family and friends.’

‘In November 2016 I started to play netball again, training with my club and playing in regional games. My family and friends were amazing in helping me through this period, supporting my decisions while helping me to get on with life! Netball has been a huge part of my life and I believe that my experiences in netball gave me the strength and positive attitude to get through fighting cancer. It has been just under three years since I was diagnosed and I have had a completely different approach to life since then; I feel stronger and more positive. I suppose I have written this to raise awareness of ovarian cancer. Listen to your body and if you notice any changes at all speak to your doctor. If you don't get anywhere with them, go to A&E. I have been lucky and I know that. My reviews and scans will continue for five years until they feel it is a low enough risk for me to be in remission. So, for now my fight goes on every day. And I will probably worry for the rest of my life, but I won't let it stop me from living.’

‘Cancer Research UK has come so far in recent years. The amount of content that you see on social media and tv is amazing at raising awareness and encouraging people to be aware of any changes in their body and to have the confidence to get themselves checked out to catch cancer early.’