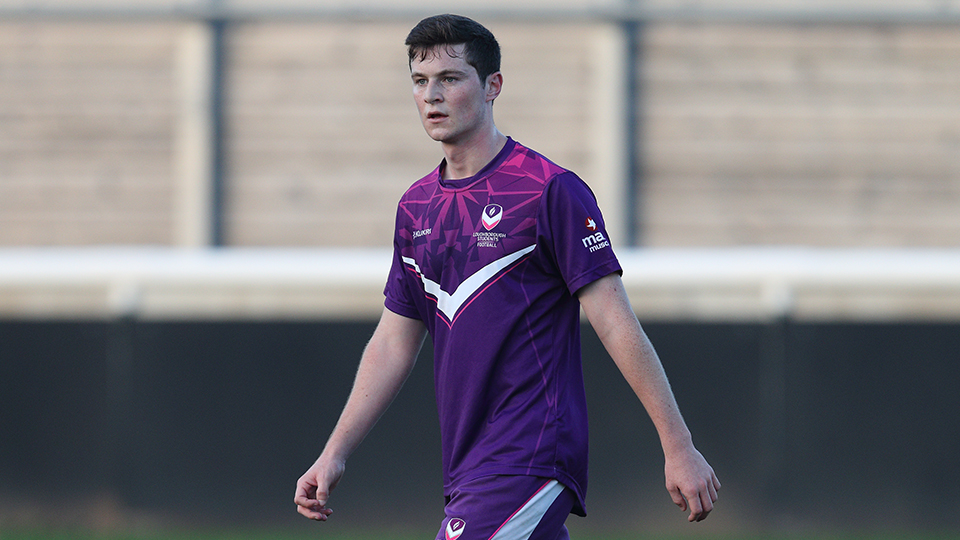 Joe Jackson scored on 60 minutes to get the scholars back in the game.

Loughborough University were on the end of a 3-1 defeat at the hands local rivals Shepshed Dynamo.

The scholars visited the Dovecote stadium looking to build upon the 3 points picked up against Stourport Swifts on the weekend. The task would not be a easy one, with Shepshed sitting in the top 6 with games in hand on the teams above them.

Despite the challenge ahead of the scholars, they started brightly utilising Dasaolu on the left to get at the shepshed defence. An early chance for the scholars saw an effort from the tricky Dasaolu parried away by the Shepshed keeper on 10 minutes. The resulting corner found its way to Joe Jackson at the far post who could only hit the woodwork with his flicked effort. This was followed by some Shepshed pressure on the Scholars goal with two efforts on target being comfortably held by Hiton in goal.

As the half progressed both sides had good spells in possession but the first goal didn't arrive until the 32nd minute, when an attack on the left hand side saw the ball fall to Thomas inside the area who slotted home past Hilton to put the hosts in front. Before the first half was up the scholars allowed Shepshed to extend their lead through an unfortunate own goal. An inswinging corner into the back post saw the ball ricochet off the scholars centre half Eggleton into the Loughborough net.

The second half started with the University looking to get back into the game early doors. On 60 minutes a scholars long throw saw the ball work its way out to Ben Last who struck his effort from outside of the box on to the post, with the rebound falling to the onrushing Jackson who tapped home.

This gave the scholars half an hour to find the equaliser. However, 10 minutes later Shepshed regained their lead through a contentious refereeing decision saw play continue when a deep cross from Wakeling on the right hand side saw Scholars keeper Hilton go up to claim the ball before being bundled over by the challenging Shepshed striker. Despite the scholars protests they were given the task of clawing back a two goal margin again.

With 20 minutes to go Shepshed dropped off to manage the scholars pressure on their goal. Chances for the scholars came firstly through a Jacob Croud freekick which was saved by Ganley, before a audacious outside of boot effort from captain Matty Crookes struck the crossbar.

The Scholars continued to press but struggled to make the most of their opportunities in the final third. The 3-1 defeat sees the students remain in 16th spot with their next fixture against 15th placed Highgate United on Saturday at The Coppice.