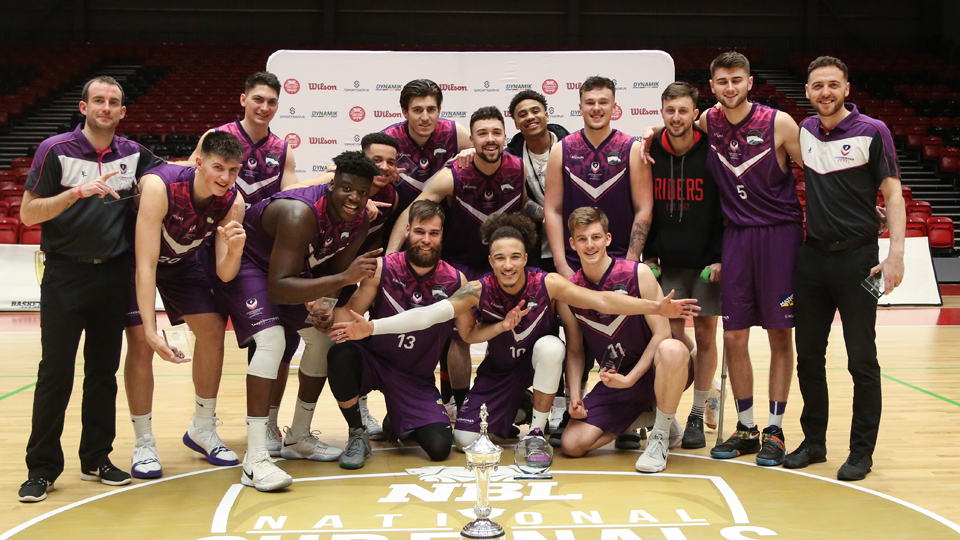 Loughborough Riders claimed both the men’s and women’s National Cups this weekend. It was the first time the men’s side had won the cup, continuing the success of recent times.

In the men’s match a 17-point 3rd quarter explosion from Loughborough’s Lucien Cristofis was enough to break the NBL National Cup Final wide open and sent the trophy home with the Riders. The final score was a dominant 82-63 win that Team Solent Kestrels were powerless to resist.

“We knew there were certain key guys who we needed to limit their touches and make things really tough. Credit to our guys, they were able to be mindful of that and execute. Solent are very good in transition, particularly Herm (Senor II), he’s very quick and makes good decisions on the break, we just wanted to get bodies back and make him play half court.”

“Being MVP is a big achievement for me, probably one of the biggest for me so far. I had to pick myself half way through the game but my guys gave me energy and let me play with freedom. My mind set was ‘I can’t change the past, but I can still shape the future’ so I forgot about the 1st half, relaxed, and played my game. From there it just came naturally”

The women’s match saw another clinical performance with 27 points from MVP Holly Winterburn were more than enough to help Loughborough Riders claim the National Cup. A final score of 81-54 highlighted the Riders dominant performance, winning all four quarters of the Final. Opponents Reading Rockets refused to quit though and made sure Loughborough stayed on their game right to the final buzzer.

Winterburn’s scoring was a focal point, but she also added 10 rebounds, 5 assists and 5 steals to her afternoon’s work, making her a nailed on MVP selection.

The game got underway with a play that would mirror large periods of the Final, as Winterburn wove her way around a couple of screens on the perimeter, shaking free of her marker before spotting up for a catch and shoot 3. With Loughborough’s ball movement as slick as ever, that meant the eventual MVP was able to fire away to devastating effect. With 10 minutes gone, the Riders led 21-9, Winterburn had 13 points and she was already heating up from range.

A 19-0 run from the Midlands side straddled the first change, opening the game up and putting Loughborough in the driver’s seat. Even when Reading did try to build some momentum, the Riders had an immediate answer, draining timely baskets as their lead pushed towards 20. The half time score would eventually settle at 41-25, with Winterburn on 20 and 4/5 from downtown.

With Reading looking for a response after the break, they were unable to find it as their opponents went on a 15-8 run to start the 3rd. Baskets by Monica Herranz De Antonio (20 points, 13 rebounds, three assists) and Monica Herranz De Antonio helped reduce the deficit back below 20, but any momentum was quickly nixed by a Megan Jones (14 points, six rebounds, three steals, four blocks) 3-pointer from the left corner.

Some late rotation from Loughborough allowed Reading a little life in the game’s final quarter, but two quick baskets by the Riders quickly shut down the already remote potential for a Rockets’ comeback.

“It’s always easy to let up, but we’ve done it to teams and come back from 20 down so we just kept playing and won it. This is so much fun, to play in this team with my friends, the girls I go to school with. When it comes to doing well, it’s the best.”