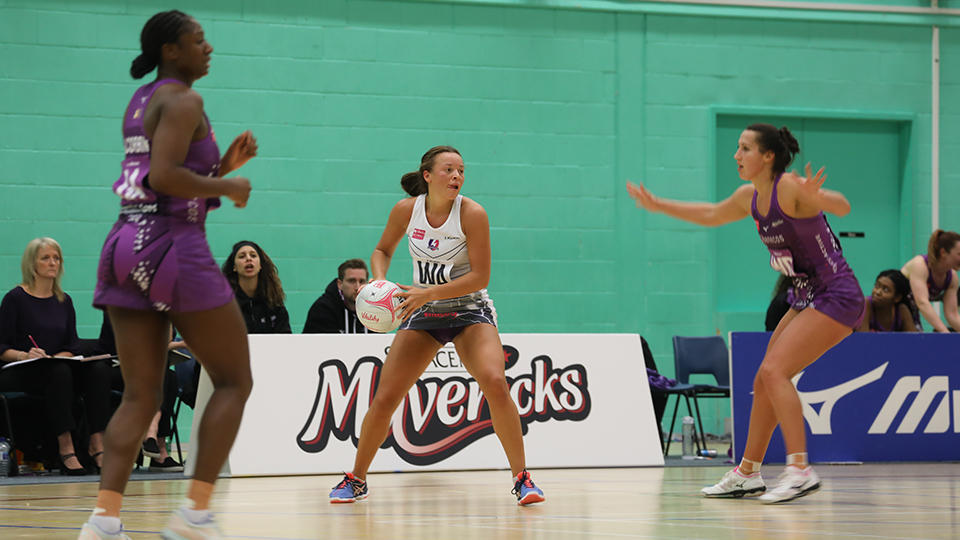 Loughborough Lightning took home a difficult defeat on Saturday night after a physical battle on the road with Saracens Mavericks clinching the 54 – 41 win in round three of the Vitality Netball Superleague.

Eager to impress their home fans for their first home match of the season, newly named Saracens Mavericks got off to a flying start, claiming the first four goals. But Lightning were soon making their mark in the game closing the gap. With both circle defenders keeping close to Cholhok, in an attempt to disrupt Joseph’s drop balls, it was up to Clark to sink the first shots against her old side.

Beginning the second quarter with the same line-up Lightning were wide awake and ready to rewrite the opening fifteen minutes and get themselves on top of the home side. With both teams increasing the speed and physicality, much to the delight of the sold-out home crowd, every single ball was fought tooth and nail to be kept in possession. Fancy footwork from Cholhok and dominance in the D from Oyesola and Keenan saw Lightning double their points before the half-time break.

Moving Panagarry to WD and bringing on Shaw to centre, Lightning needed to muster all their remaining energy to turn the fate of the game around in the second half. The physicality and aggression on court ramped up yet again and both sides sought every opportunity to wreak havoc and disrupt the flow of the game. Their best quarter of the game saw Lightning close the gap to just four goals with 5 minutes left in the quarter.

A huge fifteen minutes stood between Lightning and the end as the final quarter got underway. An unchanged Lightning side mustered all they could to once again close the gap to just four however a series of mistakes opened up the opportunity Mavericks were looking for to run away with the ball and widen the gap once and for all to seal the win.

Head Coach Sara Bayman was keen to highlight the game’s positives, despite the final score;

“I think today was frustrating because we did some really good stuff but we just gave too much ball away. We knew today was going to be tough, Mavericks have been named one of the favourites this season but we also knew we had the game and determination to match them. I think we proved that in parts tonight but I think if you give a quality side like Mavs too much opportunity they’re going to use it to their advantage and run away with it as they did tonight."

Regardless of the extreme physicality of the game, causing multiple cautions form both sides, Bayman was pleased with the effort put in from her side;

“I think Ella Clark had a really strong game, our defensive unit grew throughout the game seeing Vicki and Tuaine coming out with a lot of ball towards the end. Our mid-court generally just grafted which we wanted from this game but I think across the board everyone needs to take individual responsibility for their own errors tonight.”

Looking ahead to next week’s fixture, Bayman cited Sirens new signing as their secret weapon;

“I think Sirens is an exciting one as they’ve improved massively from last year and I think they’ll upset a few teams this season. They’ve got a massive target shooter in terms of Cat Tuivaiti so we’re going to need to win ball a bit earlier up the court. Hopefully we can fix a few things in training this week and go into next week feeling confident.”

Lightning are back in action next weekend on home turf as they welcome Strathclyde Sirens to Loughborough University. The match will form part of the Pink Party event where we’ll be aiming to raise as much money as we can for Cancer Research UK. Fans are encouraged to wear pink and come early to join in all the games and activities before the main event at 6pm.

Tickets are selling fast so secure yours now: www.loughboroughlightning.com