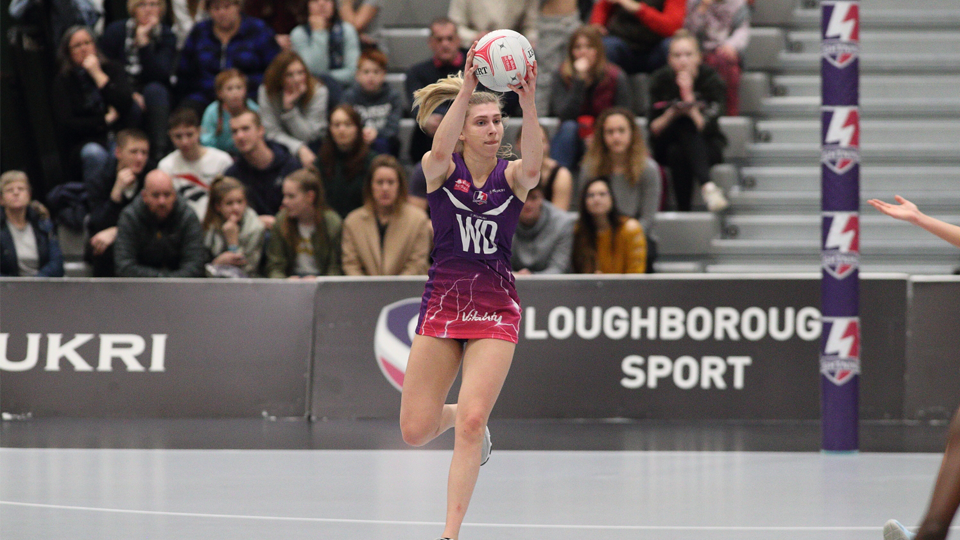 Over 700 dedicated netball fans were treated to a fierce encounter at Loughborough University on Saturday night which saw Lightning claim their first victory of the year over Severn Stars.

The match started on even terms as both sides converted their centre passes to keep the score line ticking over. It was Lightning that took the initial lead after 5 minutes of well fought play but Stars were not ones to let this lead go. Increasing the speed and physicality the scores soon became level once again despite the constant turnovers from Tuaine and Oyesola. Lightning finished the quarter trailing by just a single point.

With nothing to lose and much to gain, both teams came out fighting in the second quarter. Sharpening their passes and continuing to push on, Lightning took hold of the score board once more and with Coleman and Clark’s smooth shots they soon had a two-point lead on the visiting side. Changes to the shooting circle saw Clinton at GS and Coleman at GA giving Clark the opportunity to review the situation.

The second half saw changes no to Lightning’s line-up but changes came in the form of consistency, possession and work-rate. Eager to keep their lead over Stars, Lightning worked hard to keep possession through the mid-court to deliver the ball safely into the shooting circle. Keenan’s dominance against Stars 6ft 5 shooter began to pay off with multiple turnovers in hand to give Lightning the edge needed.

Changes in the final quarter saw Jess Shaw come on at centre with skipper Nat Panagarry moving into the wing defence position and Lightning a fresh pair of legs to help them secure the win. With everything to play for the evenings’ intensity hit a new high with both teams fighting tooth and nail to claim every ball and convert into crucial points.

Claiming her first win with the side since starting in her role as Head Coach, Sara Bayman credited the home crowd as Lightning’s key to success;

“I think we did a lot of work in the week about what went wrong against Wasps and I think the girls have really learnt from that loss and stepped it up this week. I think Nat Panagarry and Hannah Joseph had a great game with Jess Shaw making a big impact coming into that mix too and so I think we were able to control the centre court well which made a huge difference. Tuaine also had a great game especially towards the end making lots of turnovers and to do that against such a tall shooter is very impressive and excellent from her.

I think we’re going to keep everything as normal as possible this week despite the break to keep momentum and then come back for Mavs feeling refreshed and ready to go.

The atmosphere was great tonight and I think the big turnout and a close match kept the night alive and helped us push on to the end.”

“It was a good match on the whole, we had some ups, some downs and definitely some things to work on but we’re all really happy to have got the win.

We’ve got a break next weekend so now it’s back to the drawing board to look at our mistakes from this week, work on correcting those and then start to prepare for Mavericks away.

I know as players we love playing at home and it was great to have so many fans here to support us in our first match. If we can keep such a good crowd throughout the season it’s going to make a huge difference.”

Lightning are back in action at Loughborough University on Saturday 2nd February when they welcome Strathclyde Sirens to campus. The match becomes the pinnacle of the Pink Party event in aid of Cancer Research UK.

Tickets are on sale now and selling fast so grab yours now before they’re gone!