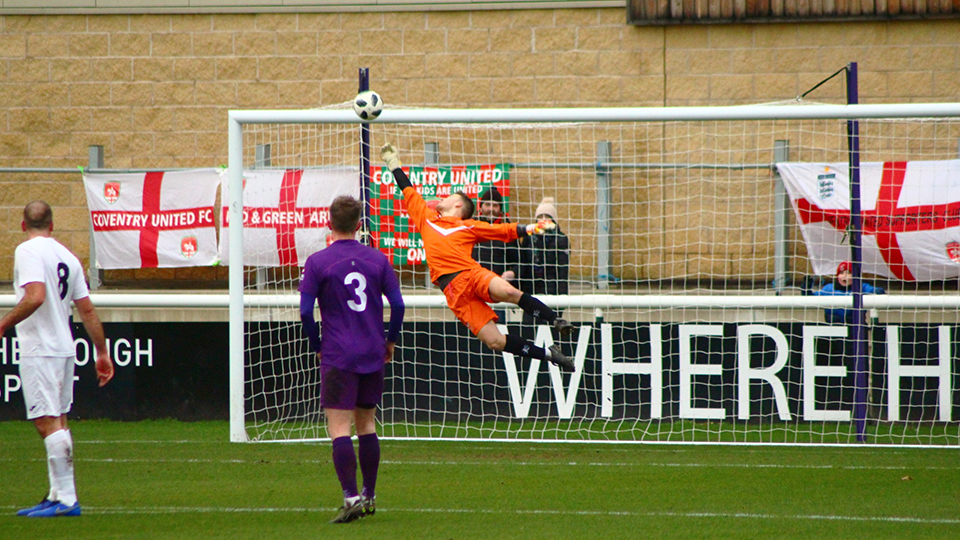 Conor O'keefe put in a fine display in the scholars net, pulling off some important saves. (Image by Adam Wesson)

The first half was dominated by the visitors, who played the ball around the Loughborough midfield easily, creating multiple chances and only had their poor end product and an inspired performance from Loughborough keeper Conor O’Keefe to blame for not being in front. The aforementioned keeper O’Keefe was called into action on 14 minutes, acrobatically thwarting a long range effort over the bar from Coventry’s midfielder. Just two minutes later he was needed again, after Coventry’s forward flicked the ball effortlessly onto the onrushing midfielder, leaving him with only a calm finish to put them ahead. He could only poke the ball straight at O’Keefe.

Not long after, a delightful ball over the top of the defence found Coventry United’s right back but he too could not apply the finish, instead scooping it well over. Loughborough had a few shots of their own, but none were very powerful or accurate.

O’Keefe was called into action yet again on 32 minutes, getting down to save excellently from a shot following a free kick. It seemed only a matter of time before Coventry took the lead, but they were very wasteful in many promising positions. Coventry’s number 9 chose the wrong option of having a 20 yard shot rather than passing to his team mate who would have been clean through. The half time whistle was welcomed by Loughborough, who were lucky to go in level.

he home team were much improved after the break, and moved the ball much better. The main instigator was centre midfielder Ben Last, who made space for himself excellently on several occasions, including when he forced an excellent save from the travelling keeper after a classy individual run on 53 minutes.

Just as Loughborough were looking threatening the visitors took the lead. A cross to the edge of the box was delivered from Coventry’s right, finding their number 9, whose shot appeared to be well charged down by Jordan Connor. However the referee deemed it a raised arm and a handball, so Coventry had themselves a penalty. Centre back Kyle Barnett slotted home expertly.

Loughborough turned the screw thereafter, and began to assert themselves. A well worked move saw Matty Crookes cut the ball back from the left touchline to waiting forward Connor Smith, whose goal bound shot was well blocked by the defender. The home side had all of the possession now, using the width of the pitch well to push the visitors back. Substitutions made an impact and one of them really should have levelled it up. Kel Akpobire came on for Dan Collins, and found the ball rebound to him 12 yards out with only the keeper to beat. His low shot couldn’t beat the outstretched legs of the keeper though.

Into the last ten minutes the game went, and Ben Last remained the team’s main threat and unsurprisingly played a huge part in the late equaliser. In the 84th minute he popped up on the left wing, skipped past one challenge and nutmegged the next, before being sent to the floor illegally. He took the resulting free kick, floating it perfectly towards the back post. It found captain Matty Crookes and, 5 yards out, he headed safely into the corner. Jubilant Loughborough had the reward for their improved second half display, and pocketed the point in the Midlands Football League encounter.