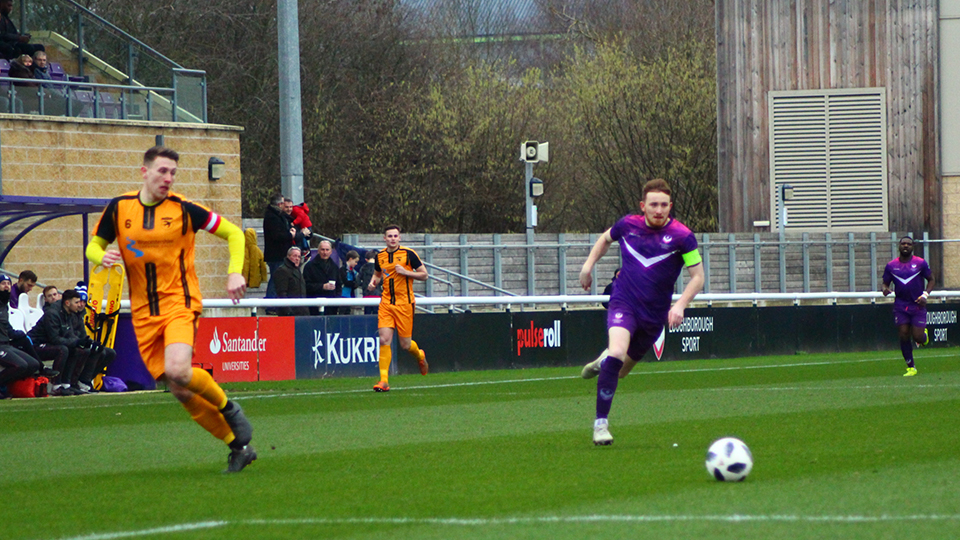 The scholars will go into the Semi-Finals of the Leicestershire & Rutland Challenge cup with confidence after a fine display against Anstey Nomads from the Future Lions United Counties League.

The scholars will go into the Semi-Finals of the Leicestershire and Rutland Challenge cup with confidence after a fine display against Anstey Nomads from the Future Lions United Counties League.

From the off the students were on the front foot dominating possession which was rewarded with an 8th minute goal. On his day Jez Dasaolu can trouble any fullback with his tricks and pace, today looked like one of those days when a powerful run on the left saw him set up Kel Akpobire who tucked home on his first start since early December.

The early setback for Anstey seemed to get them going as the next 10 minutes saw them gain more possession in the scholar’s half instigated by the powerful Cosmos Matwasa. Nomads applied pressure on the Loughborough backline but some good defending by Croud followed by a Lewis block and Hobbs save on 25 minutes kept the university in the lead.

After managing the pressure well, the students looked to extend their lead. The first chance came in the 25th minute when a good interchange of passes saw Connor Smith’s shot just slide wide. 5 minutes later, pressure from Crookes saw him steal the ball around the Anstey area but his effort didn’t trouble the keeper as it sailed over the bar.

The second goal did come soon after through another Dasaolu run breaking into the area and providing the simplest of finishes for Kel Akpobire, making it 0-2 on 36 minutes. With 9 minutes remaining of the first half the scholars managed the game well, restricting Anstey’s chances to get back in the game before half time.

The second half saw Anstey look to get their most lively player Matwasa more involved by playing him centrally. However, the Anstey attacker could not get into the game, being marshalled well by Lewis and Jackson in the centre of defence.

On 60 minutes the scholars started to get a foothold of the game with Anstey dropping the tempo after failing to breakdown the scholar’s backline. Scholars fullback Jordan Slack started to find space on the left and his mazy run forced the Anstey keeper into a good save. 10 minutes later the Anstey backline were under pressure again when a fantastic through ball by Ben Last put Akpobire through on goal to complete his hattrick. However, after rounding the keeper his effort from a tight angle was cleared by the recovering Nomads defender.

As the game entered the final 10 minutes Nomads still looked to create chances with numerous crosses being put into the box but the scholars maintained their strong defensive display.

The students then put the game to bed when a bit of magic by Ben Last saw him beat three players on the edge of the area and slot home past the on-rushing keeper in the 90th minute.

The draw for the Semi-final of the Challenge Cup sees Loughborough play St Andrews on the 12th February at the home of Leicestershire County FA, Holmes Park. 7PM kick Off.