Scholar’s Through to the Final in Thrilling 5-1 Win. 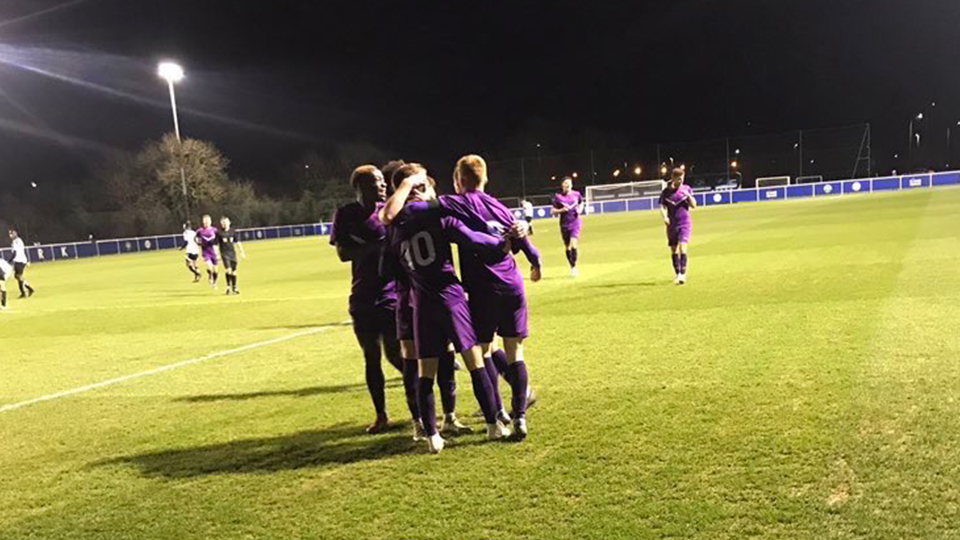 Tuesday night saw Loughborough University take on St Andrews FC in the Leicestershire FA Challenge Cup semi-final at the neutral ground, Holmes Park, the home to Leicester City U23s. Both teams ran out into the cold before the game and observed a minute’s silence to mark the passing of England legend Gordon Banks; The Scholar’s all wearing black armbands to respect the man who spent most of his career keeping goal for Leicester.

The game saw Loughborough start positively with shots from Dasaolu and Crookes before the deadlock was broken in the 9th minute. Ben Last, who shone through as the star player in the first half, drove up the pitch with a simple one-two before laying off Crookes who’s left footed shot just inside the box found its way past the keeper. Shortly after, The Scholar’s doubled their lead in the 14th minute as livewire Dan Collins set up Dan Hanson. His exquisite side-footed attempt was inch perfect and the ball nestled into the back of the net.

Two goals to nil and dominating the game, Loughborough continued the first half in imperious form. St Andrew’s were forced to sit deep and defend, unable to make a spell of possession, while the Loughborough attackers of Collins and Crookes dovetailed smoothly and Dasaolu provided a useful outlet on the left. The opposition goalkeeper was incessantly called into action and would have been thanked by his defenders at half-time for keeping the score to just two down. Conversely, Loughborough were left slightly frustrated that they were unable to settle the tie completely in the first half considering the monumental pressure they were able to impose throughout.

The second half began in similar vein with Loughborough on the front foot and this was rewarded in the 59th minute as they went 3-0 up. Crookes secured his second goal of the game making a smart run between the central defenders and receiving a well weighted ball through by Hanson. The shot was calmly dispatched into the goal with Crookes, in typical fashion, making it look easier than it is. However, following this goal St Andrews drew a breath of life into their play and began to finally stamp some authority on the game. Moments after having their first shot on target, St Andrews got one back in the 65th minute. A free kick from the goalkeeper in their own half was lumped high into Hobbs’ box, and with two attackers doubling up on Bonner, a terrific header saw the back of the net bulge and the game back on.

With an added impetus to St Andrew’s play, the game became much more end to end with both teams looking to add to the score line. With 71 minutes gone, coach Alex Ackerley decided he’d seen enough and made his first substitution with Matthew Olapo coming on replace Dasaolu, bringing Crookes to the left flank with Olapo assigned on the right. Making an immediate impact, Olapo surged up the middle of the field and created a chance for Hanson which went amiss. The Scholars found their groove again and took advantage of the space in behind left by St Andrew’s more attacking set up. Meanwhile the Loughborough defence remained resolute and were able to stifle their opposition holding them to speculative efforts from range and hopeful balls into the box.

The fourth came in the 82nd minute with Crookes completing his hattrick. Substitute Jordan Connor played Collins down the left who played it first time to set Crookes through. With a sublime turn back on goal, setting himself for the shot, Crookes poked it elegantly passed the keeper. Not long after, Collins himself got in on the action with a well-deserved goal in the 86th minute. The counter attack was sparked by Charlie Lewis’s brilliant interception and Hanson knocking it through to the in-form striker who was able to play it through the legs of the onrushing keeper.

With the ref’s whistle sounding at full time, The Scholar’s held their heads high as they walked off to the changing rooms and into the cup final. A complete performance with astute defending, brilliant midfield interplay and ferocious forward movement saw Loughborough’s class shine through with the 5-1 win which did not flatter. Goal scorer Dan Hanson revealed after the game the plan was to “press high and be quick out the blocks” while club captain Matty Crookes described the result as a “massive boost” for the team going into the business end of the season.

Loughborough will face either Leicester Road FC or tournament favourites Coalville Town FC in the final, with these teams battling it out next Tuesday for a place in the showcase game.