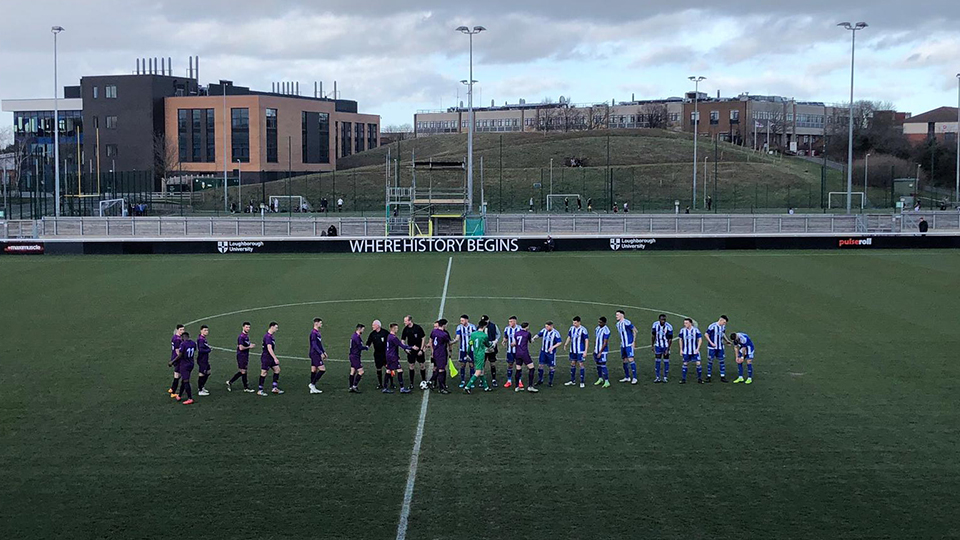 Loughborough University grabbed a valuable three points at the University stadium against Worcester City, despite a late surge from the visitors which saw a comfortable victory turn into a narrow escape. A goal apiece for captain Matty Crookes, forward Daniel Collins, Ben Last and Dan Hanson were enough in the end to secure the win.

The visitors began the game well, stretching Loughborough’s back line to free space. They got into promising crossing positions, but were wasteful when the chances came. That was however, until the 10th minute. A defensive clearance from the home side only found Ethan Moran. He took one touch to set himself, and another to expertly volley the ball beyond Hobbs and into the far top corner. A stunning goal.

Loughborough improved significantly from then on, and had a golden opportunity to equalise just before the half hour mark. Connor Smith found a hole in the oppositions defence and received the ball well, but could only scuff his left foot shot into the keepers arms.

They did eventually equalise, thanks to a beautiful controlled finish from Hanson. Right back Charlie Lewis’ cross was headed out by a defender, and, much like Worcester’s opening goal, it fell perfectly for Hanson, who calmly side footed the ball home from the edge of the box.

Then, just before half time Loughborough grabbed the lead. A surging run from impressive Connor Smith was halted by a Worcester trip, allowing Ben Last the opportunity to strike a free kick. He cleverly bent the ball around the wall and into the bottom right hand corner.

The scholars profited from a very similar situation after half time too. Twisting and turning Daniel Collins was tripped just outside the penalty box, and this time Matty Crookes struck a low effort. This time the goalkeeper was able to keep the initial effort out, but could only parry the ball back into the danger area, where pouncing forward Collins was on hand to tap in. A true poacher’s goal.

Loughborough found their fourth goal with 10 minutes to go, eager winger Jeremiah Dasaolu stealing the ball well in midfield, and playing Matty Crookes through on goal. He assessed his options and smashed the ball in with the outside of the boot. It looked to have secured the victory, but as it turned out it wasn’t to end very comfortably at all.

Worcester altered formation and looked to pile the pressure on, as they played with nothing left to lose. Worcester captain George Forsyth moved into midfield and within a minute of Loughborough’s fourth, helped reduce the arrears. He played a well-directed deep cross onto the head of unmarked substitute Kyonn Evans, who nodded home. 5 minutes later he added a goal to that assist, and set up a nervy finish. He received the ball from makeshift right wing back Curtis Withington and curled the ball first time beyond the reach of George Hobbs’ dive, the second outstanding goal the visitors had produced in the game.

It was then constant pressure from the visitors, who sensed a remarkable comeback. They thought they had it too when the ball dropped kindly for Luke English in injury time, with only a composed finish needed. However a heroic goal line clearance from Joe Jackson preserved Loughborough’s lead and, in the end, secured the three points.

Captain Matty Crookes was proud of his team’s performance in the final minutes, saying “We dug in pretty deep at the end, bit disappointed to let them back in really, but good grafting in the last five minutes to hold out, and a great three points.“