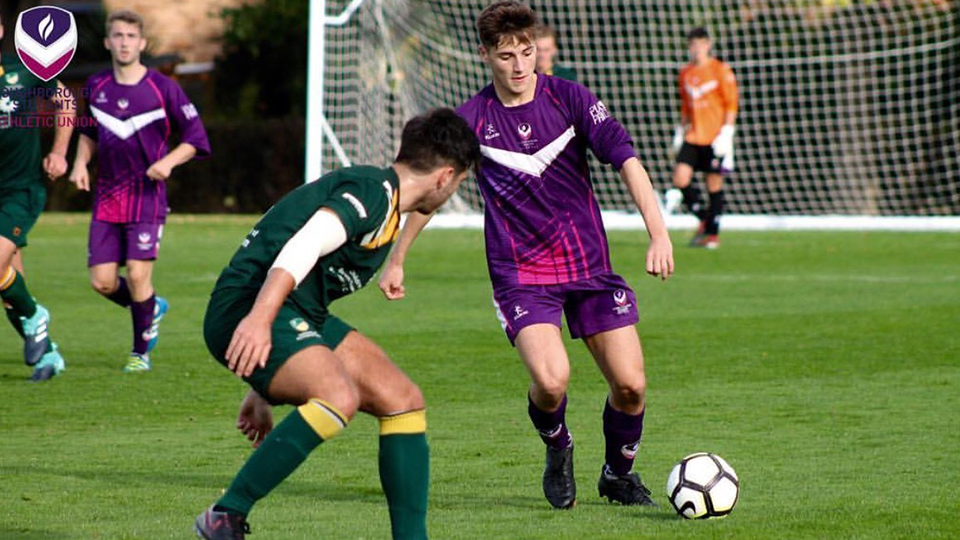 Loughborough’s Jermaine Jatu completed a hat trick in injury time to help set up a win over Chichester in an action packed cup game, which saw Loughborough reach the quarter finals of the BUCS trophy. There were six goals, a penalty, a couple of bookings, a red card, some feisty challenges and a delayed kick off, all making what was an intriguing game.

A missing assistant referee meant the kick off was delayed by half an hour, not the ideal preparation for either team. However Chichester, the visitors, found the start to the game they were dreaming of the night before, finding the opening goal inside 2 minutes. A cross from the right was not dealt with sufficiently by Roland Oteniya, allowing the lurking number nine to pounce and find the net with ease from 8 yards out.

In response, Loughborough completely dominated proceedings thereafter, right back Max Bardsley-Rowe being particularly effective. He stormed down the right constantly and almost was rewarded with a low drilled effort, which unfortunately escaped the far post. Matt Black also came close soon after with a near post header. The home team did get their just rewards eventually, in the 20th minute, when a throw in freed Matt Black on the right hand by-line. His low fizzed cross found left winger Harry Bayles at the far post who duly dispatched from close range.

Then, one became two, and the game was turned on its head. Just 5 minutes after the equaliser, the ball was played brilliantly through the middle of the park by a succession of neat touches, before finding the onrushing Jermaine Jatu, who dispatched the ball via the far post.

The action was far from over in the first half though, and Loughborough were nearly punished for some sloppy play at the back. Tireless and combative midfielder Sam Bryan under hit a straightforward back pass to keeper Scott Martin, and the Chichester midfielder evaded Martin’s tackle leaving just the gaping goal at his mercy, only for Harry Bevan to cover expertly just 5 yards in front of goal with a slide tackle. A reminder for the boys in purple ahead of half time that the game was far from won, despite their dominance.

Into the second half, and the next goal belonged to Chichester, and came against the run of play. A third man run from a Chichester midfield was found and his cut back found his left midfielder, who turned well and fired into the corner despite being under significant pressure.

All of a sudden Chichester had the impetus, and Loughborough’s play was sloppy, allowing too much time and space to their opponents. Camped on the edge of the penalty area Chichester’s number ten had enough space to unleash a fearsome long shot, only for Scott Martin to pull off a magnificent diving stop.

Chichester, still on the front foot following their equaliser, nicked the ball off of ponderous centre back Roland Oteniya, leaving their midfielder bearing down on goal. Oteniya, to his credit, applied plenty of pressure in his retreat towards his own goal, before coming in with an excellent slide tackle. However, Chichester were insistent that their man was pulled back, and in their emotion, their number 8 was sent off for being overzealous in his protests. It was he who was racing through on goal only moments earlier.

And so Loughborough now possessed a man advantage, and looked to use this to reach the next round of the competition. However, Chichester refused to roll over and the going was tough.

Fortunately, Jatu stepped up to press home the numerical advantage. Since the incident he moved more central to capatalise on the increased space. This moved paid off as he found himself staring into the whites of the keeper’s eyes just 4 minutes from time, following a cushioned header from striker Stephen Mills. He composed himself and slotted home, allowing relief to pour out of the Loughborough players.

He wasn’t done yet. A late surge from the home side meant Mills found himself in the box, his clever turn caught the desperate defender unawares, and he was tripped. Jatu was handed the opportunity to grab his third, and he did emphatically, ensuring his hat trick and his teams progress to the quarter finals.

A scarcely believable contest which flowed both ways, and was perhaps decided by a key refereeing decision. You’d struggle to find a more eventful game anywhere.

Nevertheless Loughborough progress in the BUCS trophy, and move onto the quarter finals.