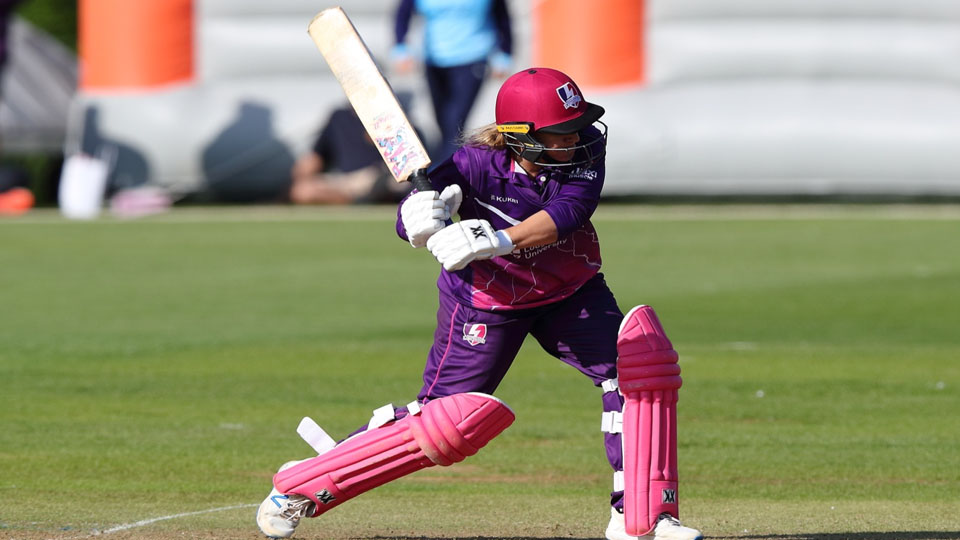 Signing off her innings du Preez struck a huge six to finish the game 135-4 having only required 130 for the win!

Openers Hayley Matthews and Amy Jones enjoyed a knock of 24 and 29 respectively, with Mignon du Preez shaping up nicely in the later phase of the game to produce a knock of 38* paired with Georgia Adams (9*) who rotated the strike perfectly.Matthews was today’s pick of the bowlers with fine figures of 4-0-19-2.

Earlier in the innings, Lucy Higham had a blinder in the field taking a huge catch in the deep off the bowling of Hayley Matthews to dismiss Alyssa Healy for 15. Yorkshire struggled to gain momentum losing Lauren Winfield cheaply for 9 and Hollie Armitage for 6. The first caught by Adams off the bowling of Jenny Gunn and the second cleanly bowled by Kirstie Gordon.

However, Diamonds found their feet in the form of Rodrigues who scored 58 but she began to fall short of partners before departing herself caught by Matthews, bowled Elwiss. Setting 130 to win, Diamonds kept the pressure on Lightning early on, with the score on 52 at the half way stage it could've gone either way. But, with wickets in hand Lightning were always favourites.

This performance is the first win Lightning have recorded at home this season and will look to continue this form later in the week when they return to Haslegrave on Friday against Surrey Stars.

“We spoke to the players at the start of the match saying this is the start of the second part of the competition for us having had a successful week on the road winning two out of three. Today was our chance to come back here and win at home and we did that really well today. We controlled the innings nicely in the first half, but we weren’t quite up to our fielding standards, but you know what you can’t be to unhappy keeping a team below 130.”