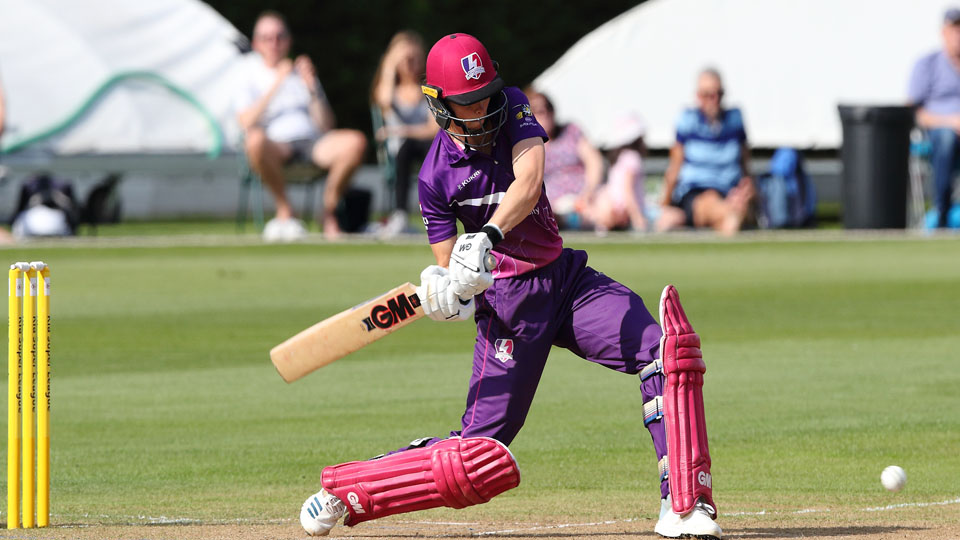 A superb 74* knock by Amy Jones secured Lightning’s seventh win of the season over Southern Vipers to sign off the Kia Super League as runners up in the league phase of the competition.

Lightning lost the toss and were put into bat by Southern Vipers. A decision that benefited Lightning who set off scoring an opening partnership worth 75 runs before Chamari Attapatu was bowled for 35.

Scoring quickly in the early overs Lightning posted 49 off the powerplay and was easing their way to a defendable target. The twelfth over brought Georgia Elwiss to the crease scoring a quick fire 28 before being caught in the seventeenth. Amy Jones raised her bat for her half century off 43 balls and continued to propel the score. Jones exploited the gaps in the field producing her highest KSL score to date 74* to help Lightning set an above-par score of 163-4. This was the highest KSL score ever to be posted at the Ageas Bowl and the biggest defeat Vipers have been on the wrong side of since 2016. Jones was also awarded player of the match for her classy innings.

Opening the bowling Attapatu had a dream start removing Wyatt caught by Kirstie Gordon for a first ball duck. Wickets began to fall at regular intervals with Bates stumped by Jones off Jenny Gunn and Beaumont caught by Gunn off Sarah Glenn within a couple overs. Vipers struggled to find any momentum as Lightning pinned the side 69-6 at the half way stage – way below the required run rate.

Kirstie Gordon picked up two wickets and produced 15 dot balls to create the pressure required to strike through the Vipers. Before a whisper of rain halted proceedings for all of ten minutes before the sides returned to the middle. Lucy Higham took a wicket on her maiden ball of this KSL campaign to remove Farrant LBW. Jo Gardner then dismissed Scholfield caught by Attapatu.

Concluding the innings Attapatu took the last two scalps of the game. The Sri Lankan captain produced fine figures of 4-0-18-3 alongside her opening knock of 35 to help Lightning cease victory.

Lightning maintained their professional standards in the field to record a 36-run victory and gain vital confidence going into Sunday’s rematch where this time a costly place in the final against Western Storm will be at stake.

Head Coach @robtaylor1989 is pleased with today's victory over @VipersKSL.

Hear his thoughts below pic.twitter.com/M0GudWiQSB

"We took our chances and stopped them through the middle"

Lightning will take to the Finals Day stage on Sunday where they’ll face Southern Vipers in the semi-final for the second time this week.