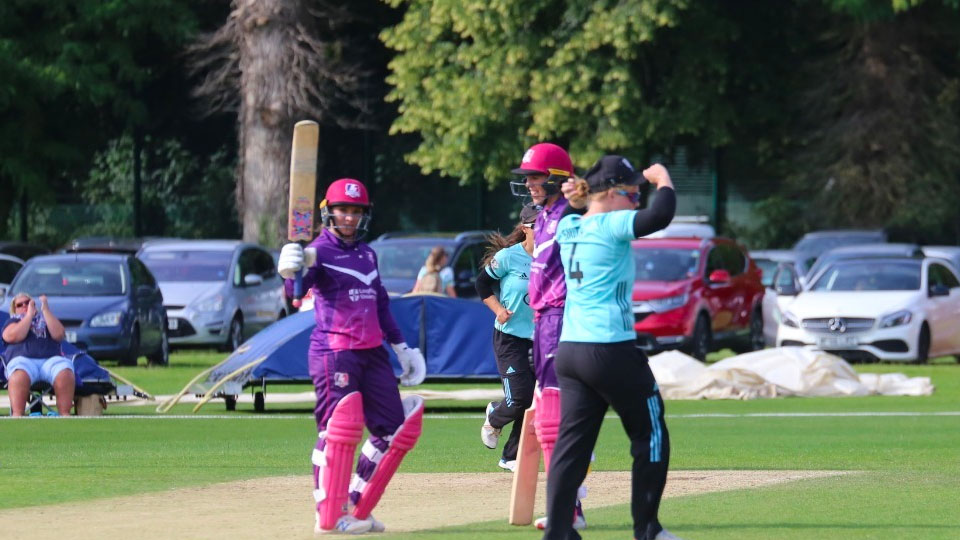 Head Coach Rob Taylor wanted the team to react to Tuesday’s disastrous performance and that they did. Restricting Surrey Stars to 120-7, Lightning required just a run a ball to take the win. A class performance from the middle order duo of Adams and du Preez saw Lightning over the line with five overs remaining.

Jenny Gunn stepped up as captain in place of rested Georgia Elwiss, winning the toss Gunn chose to bowl first.

Opener and Scotland Captain Kathryn Bryce was yet again amongst the pick of the bowlers producing 13 dot balls going for just 16 runs off her four overs with two wickets taken. West Indies star Hayley Matthews also took two wickets at the most crucial of times, sending Lizelle Lee back to the pavilion for 25 and Nat Sciver for 23. Both stumped by Amy Jones with Matthews’ variation causing problems. Sarah Glenn and Jenny Gunn also picked up a wicket each.

Top fielding efforts saw Lightning keep the score to a below par 120. However, Lightning didn’t have the best of starts losing three early wickets in the powerplay for 39 runs.

Mignon du Preez took control of the game with a maiden half-century for Lightning partnered by Georgia Adams’ 37* who supported du Preez expertly. Both looked comfortable and confident to see the side over the line with 31 balls spare.

“It’s awesome to get the win on the board, from a personal point of view I am happy I managed to convert my score to help get the win for the team which is amazing.

Obviously, we lost a few early wickets, but the score wasn’t troubling, the crucial thing was to get a partnership and Georgia Adams and I started off with this plan. Then a few of the balls came out the middle of the bat quite nicely and I realised then I am in a position to take the win for the team. I’m not really known as a power hitter who clears the fence but to play smart find the gaps and play within my strengths and run hard through the middle was crucial for us.”

“It just shows how well we bowled on it to keep them restricted to 120 which was brilliant really, they had a few big overs but we brought it back in the middle, Sarah Glenn and Kathryn Bryce were the pick of the bowlers for me and we really restricted them. Plus,  with Mignon scoring 70 it was an all-round excellent performance.”

“The way that we bounced back from our game on Tuesday was massively important. Everyone put right what we didn't do against Storm and to take two out of three wins available on the road is very pleasing. Also, seeing different people standing up and producing match winning performances is really important during this middle phase of the competition. So it was great to see both Georgia Adams and Mignon du Preez take responsibility and get some runs to build a match winning partnership.”

Next Fixture: Lightning will face Yorkshire Diamonds at home on Sunday. Tickets are available here.