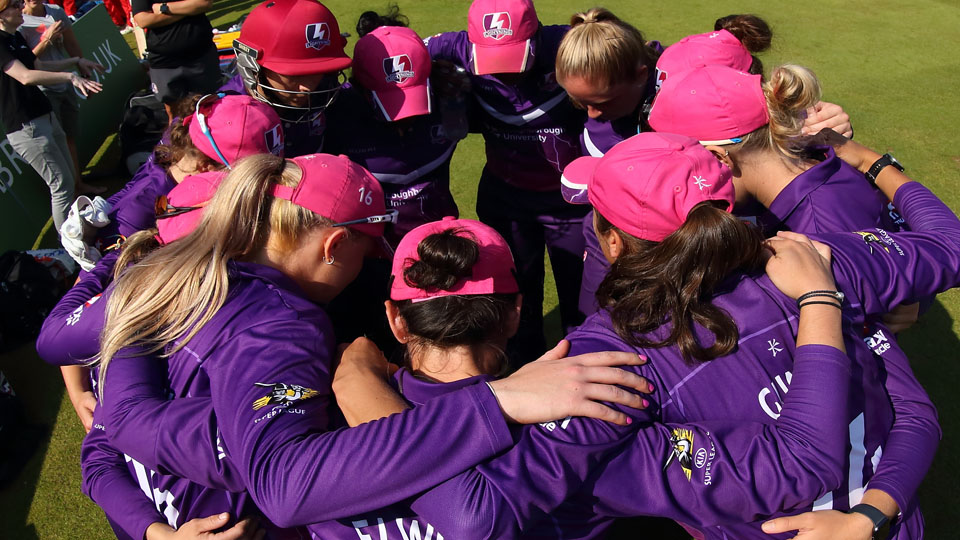 Loughborough Lightning produced a convincing 8 wicket win over Lancashire Thunder with an unbeaten knock from Amy Jones (66*) and three wickets a piece for Jenny Gunn and Sarah Glenn on what marks a special day for the Nottinghamshire born and raised Jenny Gunn.

Debut and Jenny Gunn is rarely synonymous- probably not a combination heard in a sentence for a very long time! But, today was Jenny Gunn’s eagerly anticipated and long overdue debut on her ‘home’ ground Trent Bridge.

In her 15-year England career the stalwart has yet to play a game for either England or Nottinghamshire at her ‘home’ base so made the most of today’s opportunity. Gunn has a strong affinity for the ground as it was the place where her England career started. Graham Dilley spotted Gunn at a kwik cricket competition where she launched a six into the pavilion. Impressed by young Gunn, Dilley recommended Gunn for England trials and she hasn’t looked back since. Plus, growing up in Nottinghamshire and seeing both her father and brother play at Trent Bridge, today has been a ‘dream come true’ for Gunn.

Living in the moment Gunn enjoyed a stand out performance and Lightning best figures of 3.5-0-14-3 although almost made it four wickets with missed opportunity in the field. Sarah Glenn also joined Gunn with three wickets with fine figures of 4-0-25-3 the spinner kept the pressure on Thunder who remained on the back foot throughout their innings.

Kathryn Bryce, Chamari Attapatu and season debutant Jo Gardner also picked up a wicket each to pin Thunder 96-9 before a last over run out ended their score on 122 all out.

Responding to the below par score, Attapatu was moved up the order with Jones to open the innings. The pair built their fifty partnership just after the powerplay before Attapatu was dismissed for 26. Georgia Adams had a short cameo of 11 off just 5 balls being caught on the boundary. In at number five was Abbey Freeborn who made her season debut and a knock of 14*. Jones accelerated the innings scoring quickly and banking 66* unbeaten runs to ease Lightning to an 8-wicket victory with 23 balls to spare.

This win continues Lightning’s momentum into Finals Day next Sunday, but first they face Southern Vipers at the Ageas Bowl on Wednesday where they will look to strike once again.

“Today has been an excellent day overall, from the crowd that’s come in to create that atmosphere that they did here and to perform like we did in front of them has just made today such a great day.

I think stand out performances has to go to Sarah Glenn again with the ball and Jenny Gunn who produced her best figures for Loughborough Lightning. Two really good performances in the field and we were really happy with that score at the half way mark and to be honest we should’ve put the game to bed when they were 96-9. But, we back ourselves to chase 120 In any match.

With the bat Amy Jones opening up saw us home, she went out there and scored well and Attapatu played a different role today, played how we wanted her to play and got a nice little score, so overall I’m really happy going into Wednesday.”