50 for Matthews as Lightning take maximum points over Diamonds 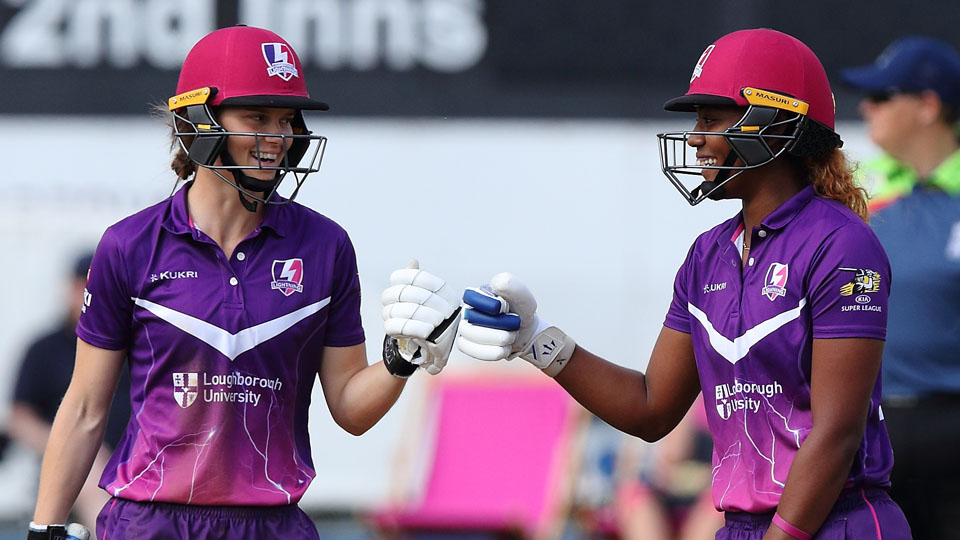 Lightning have returned to winning ways easing to a 9 wicket win over Yorkshire Diamonds. Key performances included a maiden KSL Lightning 50 for Hayley Matthews and 40* for Chamari Attapatu, who between them knocked off a below par 122 chase with six overs to spare. Whilst Kirstie Gordon was the pick of the bowlers with figures of 2-27.

Winning the toss Captain Elwiss elected to bowl first. Kathryn Bryce opened up with a maiden over with good pressure coming from Matthews at the opposing end. Matthews took the huge wicket of Diamonds’  Healy, removing the Southern Star before she could get going. Bryce then trapped fellow opener Winfield for single figures. With the scoreboard trickling over, Diamonds started to creep up the run rate before it was denied by two Kirstie Gordon wickets.

Captain Elwiss was next to strike, picking up one for just seven runs. Next was Sarah Glenn, the young spinner was clinical in her attack, finally rewarded in her fourth over with the wicket of Davidson-Richards.

Diamonds ended their innings 121-6, a score that would not phase the depth of the Lightning line up.

A strong start from Jones (12) and Matthews (54*) with help from the extras table helped Lightning make the most of the powerplay posting 46-1 after the first six overs. The loss of Jones for 12 introduced Attapatu (40*). A dominant effort from the Sri Lankan captain kept the momentum building. Upping the run rate, Attapatu stroked several boundaries to take the score one step closer to the required below par score of 121. Sharing a 50 partnership the overseas duo showcased their class.

Raising her 50 off 38 balls, Matthews key innings saw seven fours and a six to see Lightning over the line with six overs spare.

“ It was a brilliant win, I think we were really clinical, I think we started really well with the ball and we had some good plans we implemented well under control. Keeping them under 120 we was really happy with. Then a super performance with the bat, both Hayley and Attapatu showed their class, so I am really happy.”

" I am really happy with how we played today. The response from the players from the first two games has been fantastic. What’s really pleasing is seeing the areas we’ve looked at have improved in today’s game.

Sarah Glenn through the middle today was excellent. The bowling unit as a whole kept to their plans and did what they needed to, we can be really happy with how we bowled on that wicket.

Plus, the way our batters went out there was exceptional, taking good options. It’s not always the runs you score but the way you go about them and all three batters can be really happy with how they’ve batted today.”

Lightning will next be in action on Tuesday away to Western Storm. Make sure you’re following the live updates via Twitter.