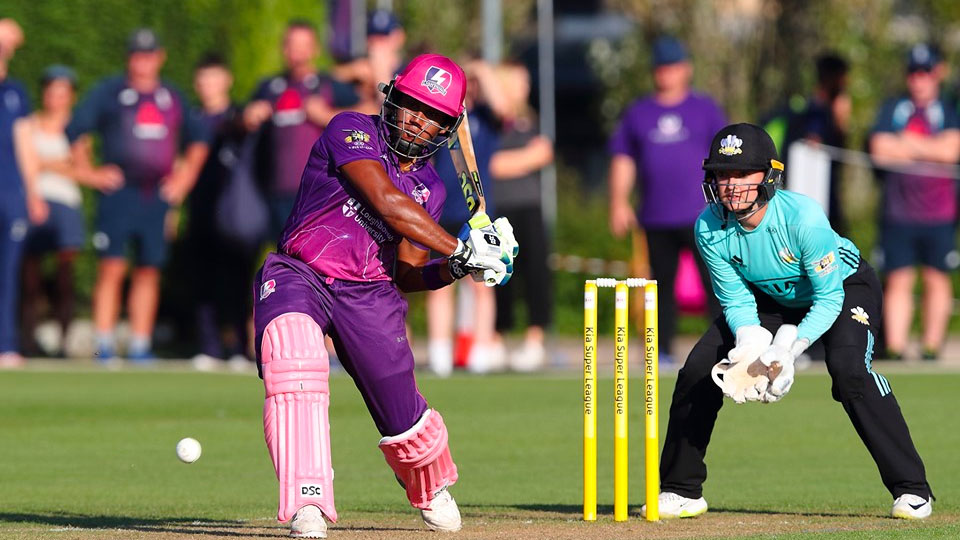 For the last time, Loughborough Lightning signed out of Haslegrave with a 5 wicket win over Surrey Stars.

With the uncertainties of life after KSL, tonight’s win rounds off a successful four years at the magical Haslegrave base and it will be one to remember for opening seamer and Loughborough University student Kathryn Bryce who dismissed Lizelle Lee on the first ball of the innings.

Stars elected to bat first, but Lightning could not have started any better, pinning the side 29-2 after the powerplay. Bryce alongside England stalwart Jenny Gunn picked up two wickets a piece off their four overs producing 26 dot balls between them.

England’s Nat Sciver (53) and Sarah Taylor (51) looked comfortable at the crease for Stars building a partnership worth 87 runs before captain Georgia Elwiss had Sciver caught by Lucy Higham – who had to make up the yards to hold on to the skied effort.  Taylor bowled by Bryce for 51 was a welcomed dismissal as five wickets fell within five overs to halt the Stars scoring.

Setting a competitive total of 147, Lightning had a difficult start losing opener Amy Jones run out for a single. However, it wasn’t too long before Chamari Attapatu accelerated the score with Hayley Matthews bringing up 40 at the end of the Powerplay. Matthews looked threatening hitting several boundaries with great intent before being stumped for a quick fire 23. Elwiss added a knock of 18 converting some creative shots to help rotate the strike with Attapatu.

Lightning were always in the chase targeting eight runs an over to stay on track. Another Mignon du Preez cameo stole the show with an unbeaten 48* including four huge sixes. Attapatu fell just shy of her half-century providing a match-winning 45.  Scoring the winning runs with nine balls to spare Lightning posted 150-5 to seal their place at Finals Day.

“We knew Surrey was going to come at us hard as they had to win to stay in it. I am really pleased about how we approached today’s match especially when they built a partnership with the bat.  Our bowlers stuck to their guns really well and held their nerve and once we managed to break that partnership, we kept them to what I thought was a par score.

I think the batters were fantastic with Attapatu coming off today. I am really chuffed for her because she’s been working really hard in the nets and really deserves it. Also, Mignon du Preez finishing off the innings – she’s been fantastic for us this season and we will want to continue this momentum now into finals day.”

“Today’s game against Stars was a very different to the game we had against them in Guildford. They batted very well on what was a really good wicket.

I think the bowlers which stood out for us was Kathryn Bryce and Jenny Gunn who both went for less than a run a ball and took two wickets a piece which really gave us some control. We also took 5 wickets in the last 5 overs of their batting innings and that almost halted their innings and gave us a total that was just above par here.

It was at the halfway stage when we thought we could definitely chase with the bat. Attapatu with 45 and du Preez with 48 not out to get us over the line was absolutely brilliant. Also the way Hayley Matthews played with real intent hitting boundaries early on for us and the rate never got above 8.5 an over so we were always in the chase and it was always going to take one or two contributions and we got that from our players"