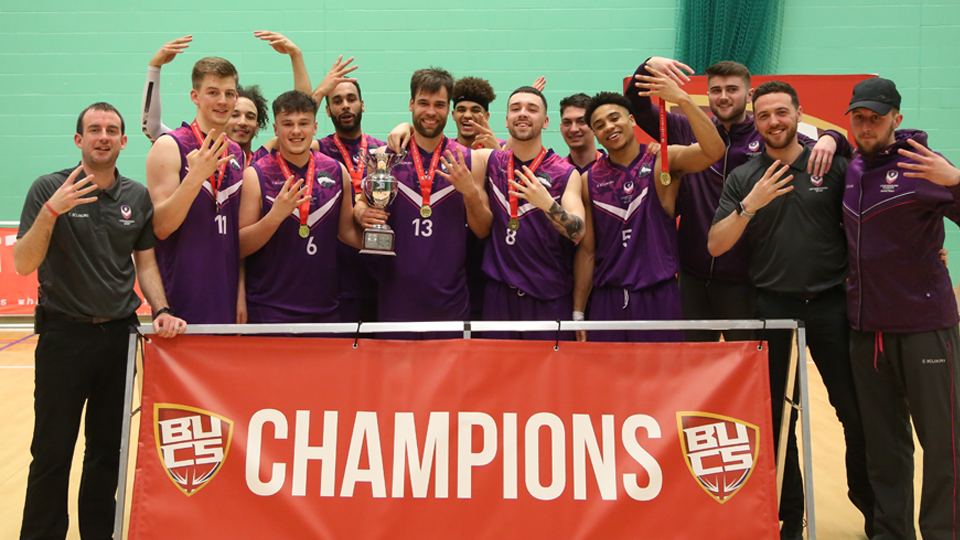 Loughborough Students Basketball have cemented their on-court prowess winning the BUCS Championship for the fourth consecutive year. The side faced the University of East London in the concluding match of the annual BUCS Big Wednesday securing the crown 90-82.

In the first quarter, Loughborough fell six points short as UEL powered their way 24-18 ahead. Loughborough clawed this gap back in the second 42-44. This set up an entertaining third quarter where Loughborough got into their stride, showing their strength to take the lead 73-67.

With the last ten minutes to play for UEL had a quick 12-point surge drawing things even 79-79 in the final few minutes. Loughborough held their own and dismissed UEL with 3-point efforts from Reis Pinnock and Josh Ward-Hibbert securing the 4-peat 90-82.

MVP was awarded to Lucien Christofis who was central to Loughborough’s victory with 24 points, 15 rebounds – 10 offensive.

This win further marks Loughborough University as a dominating threat in the Basketball world and celebrates the success of the pathways and efforts of the team behind the team.

One of the many leading figures crucial to winning the fourth straight BUCS Gold Medal is Head Coach Mark Jarram who has led the program the past seven years reaching five finals during his time at the helm of Loughborough Men’s program.

“It’s an absolute pleasure to coach these guys! To achieve four in a row is really special and I hope the guys don’t take that for granted. It’s hard in these moments to put what it means into words. But so many contributing factors go into this. People who support us and allow us the opportunity to put a team out there. We just try to do the best we can with what we’ve got, always!”

“It’s an amazing feeling. We all know what we’re capable of and work hard all year for moments like this. UEL made it very tough for us, they’re a very strong team but we were relentless and played to our strengths with everyone contributing.”

“It’s great to have so much success with these guys, day In and day out we practice for these big moments. This was my last game for Loughborough University in BUCS and we had to bring the 4-peat home! I’m just so blessed to have such specials teammates and amazing coaches and staff!!”