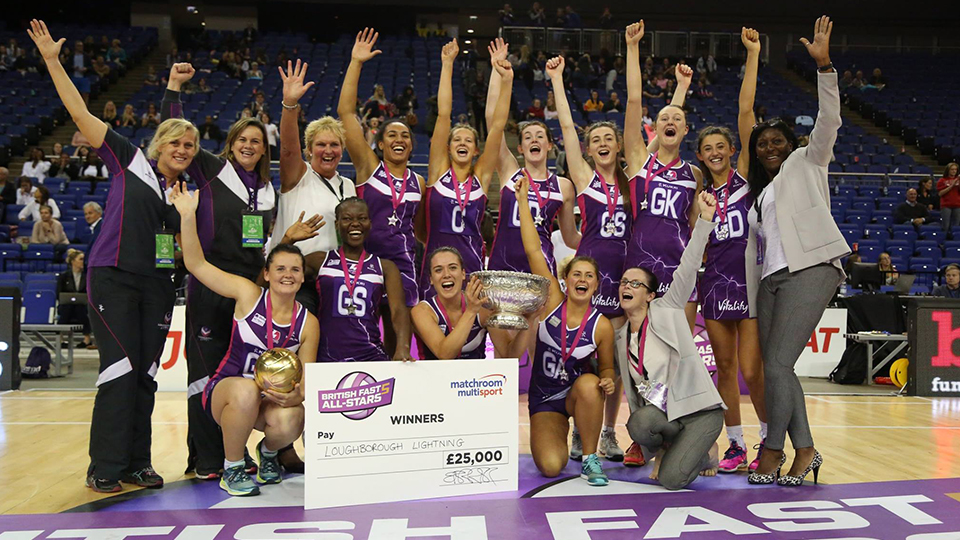 Loughborough Lightning Netball are gearing up for this weekend’s British Fast5 All-Stars Championship, where some familiar faces are set to return to court.

After claiming victory in the inaugural event last year, Loughborough Lightning made history as the first ever winners of the competition, scooping a whopping £25,000 prize fund in the process.

A shorter and quicker version of the traditional seven-a-side game, Fast5 gives teams a fast paced, exhilarating 12 minute game format, where teams can boost points with the golden buzzer and five point shots from within the court.

With new Head Coach Sara Bayman’s team for the 2019 Vitality Netball Superleague season coming together nicely, her attention will now turn towards the side that will aim to lift the trophy once again this weekend.

“This year’s Lightning Fast 5 squad is an exciting mixture of youth and experience. Naturally our aim is to defend our title, but Fast5 is about having fun and we’ve got some real crowd pleasers in this team.”

After a stellar four years with the Lightning side, fan favourite and Ugandan powerhouse Peace Proscovia will make her final appearance in purple before her move to Australia, where she will begin training with Sunshine Coast Lightning.

Linking up with Proscovia in the shooting circle is long bomb queen Renske Stoltz, the South African making a welcome return to the competition after being named MVP (most valuable player) 12 months ago. Rounding out the sides attacking options are recently unveiled youngsters Lucy Parize and Amy Clinton, both fresh off the back of their Netball Europe campaign with England U21s, where they claimed gold medals.

Also making her first outing in purple is Jess Shaw, the mid-courter with experience of the competition format having taken to the court for Team Bath last year. Swapping Bath for Loughborough ahead of the 2019 season, Shaw brings with her a wealth of experience in high pressure situations and will look to slot into the mid-court mix alongside Hannah Joseph and Rosie Harris.

At the defensive end, Vicki Oyesola brings much needed athleticism for this format of the game, her confidence high having also been part of the aforementioned Netball Europe triumph. Alongside Oyesola will be Anya Wood, who also returns to the Lightning side, along with newcomer Tuaine Keenan, who will be keen to show the fans what she can do.

Tickets for the event are still available, so why not treat yourselves to a day in the capital to witness all the action unfold live.