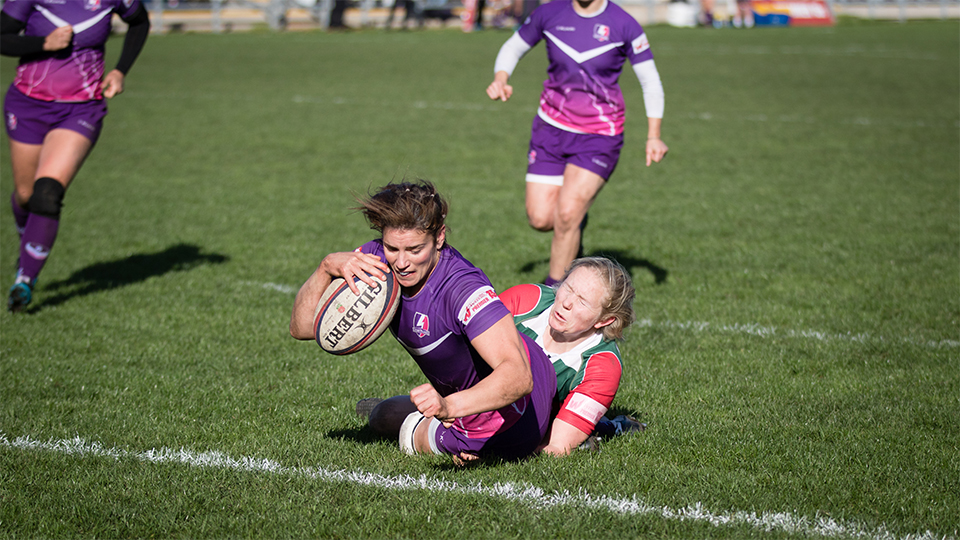 Loughborough Lightning continue their winning streak in the Tyrrells Premier 15s as they beat Firwood Waterloo Ladies 51-20 in a game of two halves.

It was a confident Lightning side that kicked off the game at Firwood Waterloo, striking within minutes with Mags Lowish crashing through the Waterloo defensive line and over the white wash. Daley-Mclean cleanly slotted the conversion to go 7 points ahead. Not to be outdone at their home ground Waterloo applied the pressure from the restart, pinning Lightning in their 22 and forcing a penalty, bringing the score to 7-3.

The game continued in the same to-and-fro fashion with Lightning scoring almost immediately after the kick-off with Deleaka Menin powering over the line to put Lightning back ahead. Waterloo responded with a try of their own only moments later, striking off a 5-metre scrum to bring the score line to 14-10.

A fantastic line-out steal from Maryke Penman saw Lightning show their set piece dominance with Emily Tuttosi powering her way over the line to extend Lightning’s lead, 19-10. Yet again Waterloo where hot on the heels of Lightning taking a quick tap penalty and scoring in the corner as the whistle blew for half time, leaving the score 19-15.

A much more focused Lightning side returned to the pitch applying the pressure to Waterloo from the off. With the momentum firmly in Lightning’s favour the forwards turned up the heat, muscling Waterloo off the ball and crossing the try line to increase their lead to 24-15. Some fantastic scrummaging from the pack saw Sarah Hunter score a brace of tries with Jo Brown also clearing the whitewash to take the Lightning score to 41-15.

In the final throws of the game, Lightning where caught off guard as Waterloo slipped through the defensive line to dot down in the corner to take the score to 41-20.

Not to be outdone by the forwards, Lightning’s backs struck twice before the final whistle, with Isla Alejandro and Charlotte Pearce flying over the line to end the game 51-20.

“It was a really tough physical game as we expected, Waterloo really put us under pressure in the first half and took their opportunities well which kept it close at half time. Challenge in the second half was to get better control and win the gainline battle. I thought we did this well and it allowed us pull away. It was a very good, attritional test which I’m glad we managed to come out on top.”

After today’s game, Lightning extend their lead at the top of the table ahead of next week’s home game against Worcester Valkyries.