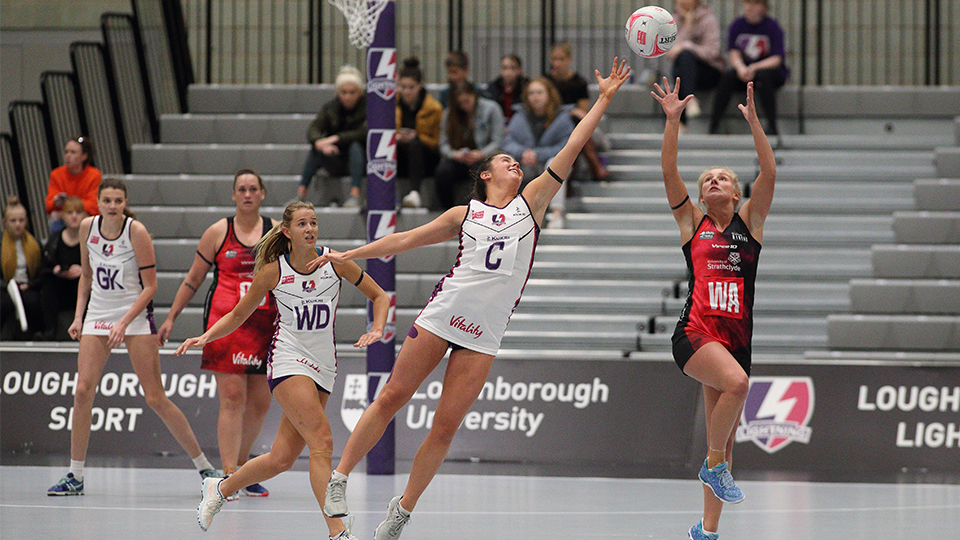 Loughborough Lightning showcased their new look team for the first time on Saturday in the first of their pre-season tournaments.

After a minute silence on court to honour the remembrance weekend, Lightning and Sirens took to the court to kick start the proceedings, all donning a black armband in respect of the fallen. A 400 strong crowd of fans eagerly joined the squads in Sir David Wallace Arena to cheer in the new and familiar faces that the tournament brought,

A fairly even start to the match saw both sides convert their centre passes levelling the scores at every opportunity. Despite an increasingly dominant defensive duo, Clinton remained calm in the shooting circle, using her long range to Lightning’s advantage to smoothly sink the shots. However, Sirens new addition Cat Tuviati was also out to impress in her new side and matched the shots, Sirens eventually pulling ahead towards the end of the quarter, finishing it 11 – 6 ahead of the home side.

Whilst both sides continued to up the speed and increase the pressure, Sirens maintained a solid lead throughout the game. Lightning’s Oyesola showed no signs of slowing, changing it up a gear at each quarter to continuously disrupt Sirens flow and gain Lightning an advantage. Despite their best efforts, Sirens ended the match on top, claiming a 28 – 51 victory over the home side.

Match number two of the day saw Strathclyde Sirens take to the court just an hour later against Team Bath. With both sides boasting big names in their 2019 line-ups with the likes of Commonwealth gold medallists Serena Gutherie in the blue and gold and New Zealand’s Cat Tuviati in the black and red, fans were eager to see how the two sides matched up.

A feisty start saw Sirens once again take the early lead however a ferocious Bath were not going to lay this match to rest, coming from behind in the second half to steal the win from the Scottish side in the final minutes of the game, final score Team Bath 39 – 33 Strathclyde Sirens.

The final match of the day saw Lightning return to court, refreshed and eager to right the wrongs from earlier in the day. With the arrival of Tuaine Keenan, Lightning’s fresh legs and determination saw them spring ahead in the opening minutes to take a 5 – 0 lead. Despite numerous changes at each quarter, lightning maintained their lead for most of the game with Hollingworth and Oyesola causing constant disruption to Baths attack whilst the smooth long bombs from Parize and Clinton saw their score line slowly creep up. Trailing by just a few points for the first 30 minutes, Team Bath made a last-minute surge in the final quarter to close the gap and level the score. However, with the on-court dominance of Bath’s international stars playing privy to lightning’s fresh feet, two goals in the dying moments of the game saw Bath take their second win of the day to secure the overall tri-tournament victory.

At the helm for the first time in their home venue, Head Coach Bayman used each quarter as an opportunity to test combination and give all players crucial game time. 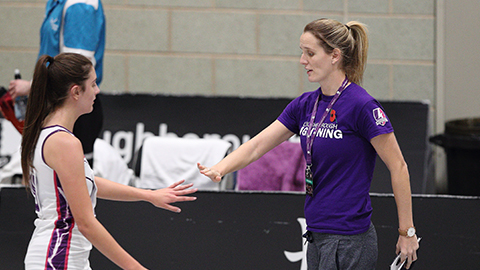 The aim of today was always to expose players, to work on combinations and to test some players out. I think we did that, we managed to get everyone on court, giving them some good court time and managed to get some different combinations out there and really have a look at people.

Despite losing both their matches, Bayman cited the difference between the two matches as promising and encouraging;

I think there’s a mixed bag from today, everyone was really disappointed with our performance against Sirens and I think you saw a bit of rustiness from the girls as it’s a long time between finishing Superleague and playing again at this level. We had a much-improved performance against Bath and I think that’s a real indication of what we can really do moving forward.

I think for me what was pleasing to see the reaction from game one to game two where the girls were really down after game one but that fight and spirit to come out and play really well against Bath was really pleasing.

In the absence of Nat Panagarry due to international duties, Lightning were led by Hannah Joseph who makes up this year’s leadership group, alongside Vicki Oyesola who’s performance on the day really set the standard of what’s to come;

In terms of standout performances, I think Vicki Oyesola had a fantastic day across both games and Hannah Joseph did a great job leading the team. Our shooting combinations are now starting to gel, they’re starting to find their way around the circle show us what they can do.

Next weekend Lightning will travel to Manchester Thunder in their next pre-season fixture. Drawing from the day’s events, Bayman is now planning for the forthcoming month;

We will now look ahead to our away game against Thunder on Saturday which is another good test for us and another opportunity to improve and build. Over the next month or so it’s about every day improving and making sure we know our systems and know how we want to play and that everyone is clear and understands their role in all situations. It will be really nice to have Nat and Ella back from international duty and have some opportunity to get them back in the mix and enjoy working as a whole squad to build connections and build understanding.

Lightning fans can catch the girls in action on home soil on Saturday 8thDecember as they welcome new side London Pulse and benecos Mavericks to Sir David Wallace Arena for their second pre-season Tri-Tournament. Tickets are on sale now so why not treat your family and friends to a great day out.