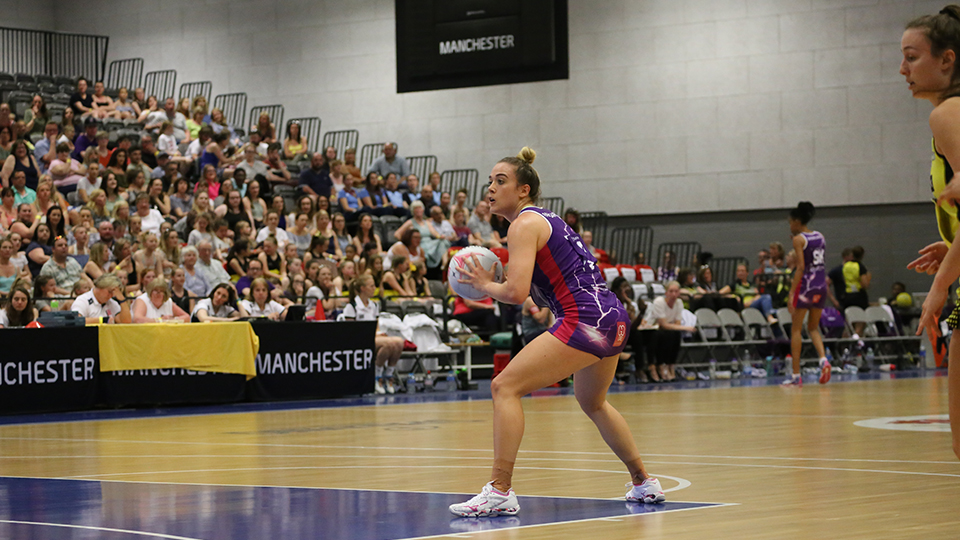 On Saturday 17th November, Lightning travelled to the Wright Robinson College to face Manchester Thunder in their latest pre-season fixture.

On Saturday 17thNovember, Lightning travelled to the Wright Robinson College to face Manchester Thunder in their latest pre-season fixture. The final score was 64-52 to in favour of Thunder but both sides acquitted themselves well and contributed to a good game of netball at both ends of the court. Thunder’s experience in the shooting circle shone through, with Joyce Mvula difficult to mark and in tandem with Ellie Cardwell, Lightning struggled to contain their flair and clinical accuracy. Lightning impressed in flashes going forward, with Britt Coleman eager to impress, showing confidence in shooting from range and proving a major threat.

Heading into the pre-season fixture, this represented a tough test for Lightning, Thunder have recruited well in the off season, and welcomed back some familiar faces to their squad such as Eleanor Cardwell and Laura Malcolm. Equally, Sara Bayman has wasted no time acquiring signings of her own, as she aims to make her mark as a Superleague Head Coach. This promised to be a hard-fought contest between two of last season’s Vitality Superleague semi-finalists.

Loughborough welcomed back returning England duo Nat Panagarry and Ella Clark to add vital some experience and leadership qualities to the starting seven. Both have been performing well for their national side but building connections with the rest of their Lightning teammates will be of paramount importance ahead of a hard fought 2019 season ahead.

Bayman was returning to her old stomping ground, but there was no room for sentiment, as the new Lightning Head Coach was fully focused on building momentum for the season ahead through tough tests such as this. Following the day’s game, and indeed the tri-tournament with Team Bath and Strathclyde Sirens last weekend, what is her evaluation of pre-season so far?

“I think pre-season has been what it should be for us, and that is a learning curve. We’re getting some combinations out on court and building from week to week. We’re not pleased with some of the errors that it’s highlighted, but that is to be expected and it’s presented some areas for improvement. Personally, I think you always learn a lot about yourself, and I’m learning a lot equally about the players too.   It’s been very pleasing to see the response of the players from being behind on the scoreboard over the last couple of weeks and how they deal with that. They’ve all shown some fight and some grit and that’s a solid base for us to work from. In the mid court, we’ve already seen that there’s going to be competition for places in terms of players who can offer more than one position for us. We’ve got a lot of flexibility and when the season starts we want the players prepared for that flexibility and not being thrown off kilt by what we’re asking of them. Nat Panagarry was tried at WD and did a good job, as did Jess Shaw at WA, so I’m impressed with how that went.”

Sara also pointed us in the direction of the second pre-season tri-tournament taking place on home territory next month.

“On the 8th December, don’t forget to get your tickets, as we’ve got two of the London sides, Mavericks and Pulse, and it’ll be especially great to have a look at Pulse as a new franchise. They’ve recruited well in the off season and they’ll be amongst the favourites in my opinion. It’s good for us to be able to go another month down the line and see what improvements and developments we’re making as a club. I think this league is going to play out as a very close one amongst a lot of good teams, so come and cheer us on if you can.”

Also, back on familiar territory was star shooter Amy Clinton, who recently swapped Thunder for Lightning. After renewing acquaintance with former teammate Sara Bayman, she is determined to impress under the new gaffer and is wasting no time in her efforts to make the shooting position her own.

“I’m loving it at Loughborough, and I’m really enjoying being out on court with the girls. Everybody is really nice and all the girls are lovely. It was great coming back here and playing with my new squad and I feel like we’re starting to gel now and getting used to playing with these girls has been good. Sara is a great coach and I feel like I’m learning loads in training. It was my first time playing with Ella as well, which was interesting and I can’t wait to keep building the combination with her.”

Former Lightning GK Rebekah Airey has made the opposite journey to resign for Karen Greig’s side. How has she found the transition so far? And what does she make of the new look Loughborough squad for 2019?

“I trained with this team and most of their players for two years so I know they’ll always keep going until the end and give you a really tough game. I felt like I knew what their tails were going into the game, but once you’re out there and they end up going the other way or doing something completely different, you’re thinking ‘oh goodness’ these girls are good. I lived with Britt (Coleman) for two years, so we were in each other’s pockets but she’s really hard to play against as she has so much energy on court. I felt like I learnt a lot from being at Lightning when I was there, and I need to keep building on what I learnt and keep pushing on as a player this season.”

Tickets for next month’s tri-tournament are on sale now, so why not treat you and the family to a pre-Christmas day out and secure your seats now!