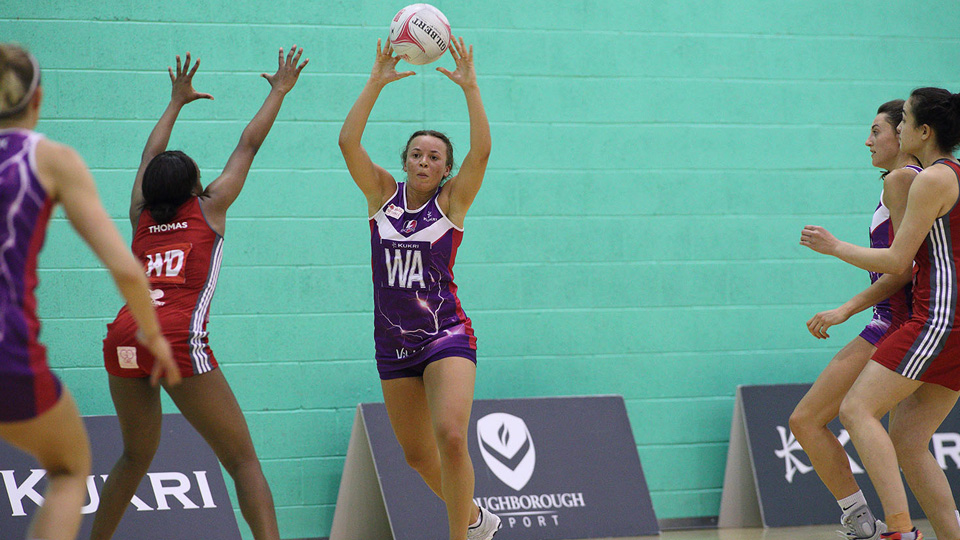 Loughborough Lightning recorded their third win in a row on Saturday night after a ferocious encounter with visitors Team Northumbria, stealing a 65 – 45 win.

In their first match of a double header weekend, Lightning stepped out onto court eager to follow on from their success of two wins in a row. Having made a dominant impact in the second half of the league, Head Coach Anna Carter and her squad needed to secure another win in order to cement their place in the top four.

On a blisteringly hot day, both sides kick started the match with a fire amongst them, using the first 5 minutes to clock up as many points on the board as possible. The score went on fairly even until eight minutes in where the home side began to ramp up the gears and push past opposition Team Northumbria. Perfect passes from Joseph and sinking shots from Clark and Proscovia saw Lightning’s score line creep slowly past the visitors. Meanwhile the ever present force in the defensive end gave Lightning crucial turnovers. The quarter ended with a last second shot to give Lightning a nine point lead.

Lightning claimed the first point of the second quarter and it was clear for all to see that their focus now was to push on and widen the gap between the two sides. A composed Northumbria meanwhile continued to work tirelessly around their attacking circle, keeping the ball safe to ensure it landed cleanly into the hands of their shooters. In turn, Lightning defensive duo Sterling and Oyesola wreaked havoc, applying pressure to the shooters whilst keeping their eyes closely on any potential opportunity to overturn the ball. Lightning went into the half time break having widened the gap by a whopping fifteen points.

Beginning the second half with slightly more ease, Carter used the gap to entrust some changes to her line up. Welcoming Grierson to court at GA and Nicholls to WD, Carter allowed Cobden and Clark a well-deserved rest whilst giving the fans the opportunity to witness some new on court combinations. Lightning’s slight shake up gave Northumbria a short window to close the gap whilst the home side found their feet and readjusted to their new pairings. This didn’t take long however and Lightning quickly regained control of the game to add yet more points to the board.

With an eighteen point lead, the final quarter began with yet more changes to the Lightning side. With Clark back to GA, Grierson moving over to WA, Cobden returning to court but this time as C and Airey on at GK, such a major shake-up would surely cause Lighting to falter in their final hurdle? But with another testing match just 48 hours away, Carter used their lead to rest, test and give opportunity to her players. After a stellar performance on court vs Severn Stars, Airey held nothing back, securing two turnovers in a matter of minutes, teamed with Commonwealth Gold medallist Beth Cobden holding down the centre court, Lightning showed no signs of slowing. The final change of the match saw young gun Chloe Essam step onto court in place of Peace Proscovia. Ever present in this year’s U21 side, Essam at just 18 years old showed no nerves as she entered the circle, despite the midst of fiery Northumbria defenders, eager to shorten the gap on Lightning’s lead.

Eager to share her happiness at the night’s proceedings, Head Coach Anna Carter shared her thoughts;

“It was really good to get the win tonight; we’ve been working really hard this week on new combinations so it was good to see them in a live game setting tonight. The girls are connecting week on week and we’ve now built some momentum and are hoping to continue building week on week. This weekend is key for us; we have a big game on Monday which we’re looking forward to. We want to be showcasing ourselves against teams that will ultimately be in the top four so we’ve been doing a lot of analysis and preparation ahead of that match.”

This spectacular result is just one win of the two on offer this weekend. Lightning will travel to Manchester on Bank Holiday Monday to face 2nd place Manchester Thunder in what’s expected to be another heated clash. Make sure to follow us on Twitter for all the latest updates.

Tickets to Lightning’s final home fixture of the season on Saturday 2nd June are now on sale. Be sure to secure your seats as they welcome Severn Stars to Leicester Arena.