Lightning cause an upset at the Wasps nest 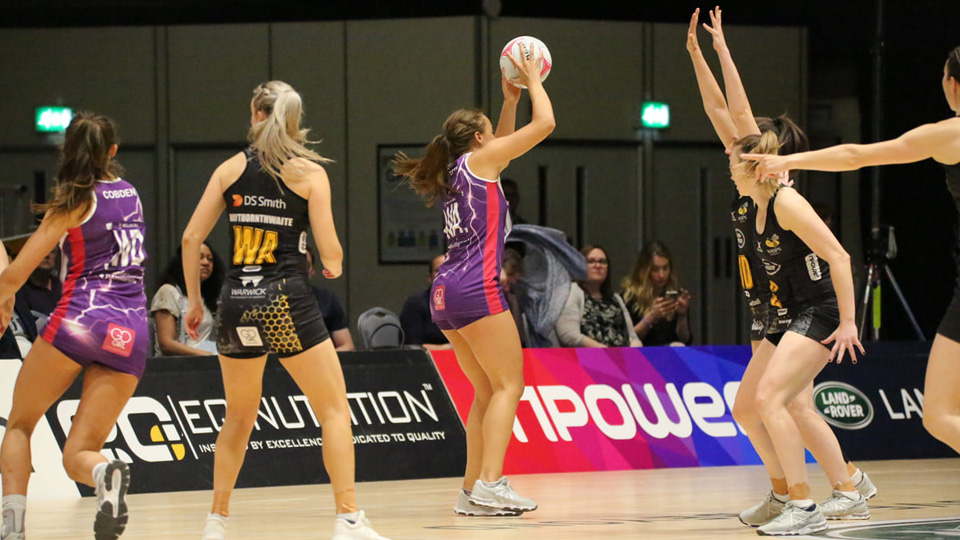 It was a determined Lightning team that squashed Wasps hopes of an unbeaten season by taking an impressive 60-47 win at the Ricoh Arena on Saturday evening.

Lightning, the only team to beat Wasps this season, were scrappy to start but quickly found their rhythm in attack, pulling away to a 4-2 lead within the first five minutes. Impressive defensive pressure from Lightning’s duo, Sterling and Oyesola caused Wasps problems in attack and with the ever-reliable Peace Proscovia down the opposite end Lightning grew their lead throughout the first quarter.

Lightning started the second quarter strong with the attacking trio, Panagrarry, Joseph and Clark, continuing to get the better of the Wasps defence. Not to be out done by their attacking counterparts, the Lightning defence took multiple flying interceptions to help extend their lead. Towards the end of the quarter Wasps fought back, but when the half time buzzer sounded it was Lightning who were on the front foot, leading by 11 goals.

It was Lightning that drew first blood in the third quarter. With play flowing from end to end, it was a calm and collected Clark that sunk a long range shot to settle the nerves. Patient play followed with great defensive back up, helping the attack to reset the ball and not force the feed into the circle. Wasps fought hard to stay in the game and the physicality levels rocketed, the Lightning defensive unit however stayed strong, placing the Wasps attack under immense pressure.

The final fifteen minutes saw Lightning up the pressure on Wasps yet again. With the commanding centre court pairing of Panagarry and Joseph working like clockwork, shooters Clark and Proscovia were fed the ball with ease. Play flowed down court with Lightning not looking to throw away any opportunity to extend their lead over their top of the table opponents. Finishing with a flourish Lightning scored their 60th goal with only seconds remaining on the clock, securing the victory in an impressive manner and another step closer to a covered top four spot.

Head Coach Anna Carter was thrilled with the win and eager to share her thoughts on such a great performance from the team;

“The girls played really well today, they dug in for each other and I’m really proud of their performance. It was a game that we wanted to win as Wasps are top of the table and beating them is something that not nobody else has achieved so far this season. We have some key games coming up that we need to perform in but this win puts us in a great position to secure that top four spot.“

After a rock-solid performance Peace Proscovia was awarded the Player of the Match award, afterwards commenting:

“I am amazed with our performance tonight. Wasps came in strong and we both wanted the win, but our hard work paid off this evening. We really needed this win tonight to help put us in a comfortable position for playoffs, however the battle is not yet over, we need to continue to keep working hard until the final.”

Next up, is Loughborough’s last home game of the season as they take on Severn Stars at Leicester Arena on Saturday 2nd June.

Tickets are on sale now: www.loughboroughlightning.com