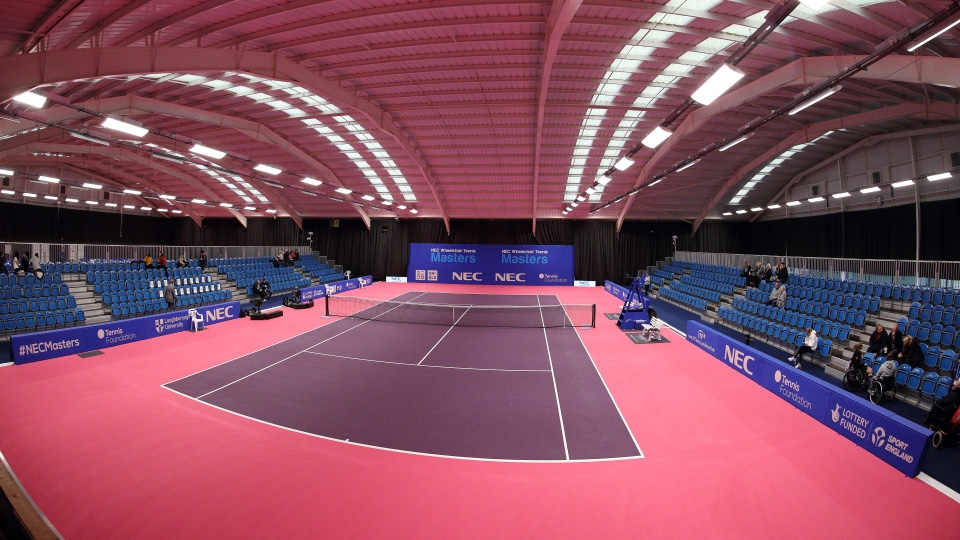 Loughborough University has been named as one of the UK’s first two National Academies for tennis, a major milestone in the development of British Tennis.

Loughborough University and Tennis Scotland at Stirling have today been named as the UK’s first two National Academies for tennis, a major milestone in the development of the Lawn Tennis Association’s ten-year Performance Strategy for British Tennis.

The National Academies will play a crucial role in the implementation of a new seamless player pathway, which sits at the heart of the new Performance Strategy, led by Performance Director Simon Timson, and aims to make Britain one of the most respected nations in the world for tennis player development.The new player pathway provides a clear route from beginners mini-red to major tournament success to support high potential junior players from the age of seven, playing the sport locally, into the top 100. It’s specifically designed to enable the best British players to regularly train and compete with one another at every stage of their development.
The pathway starts with affordable, high-quality local training for the youngest children and ends with a Pro-Scholarship Programme only for those players with greatest potential selected between the ages of 16 to 24 who are capable of reaching the world’s top 100 and beyond. In between, players will pass through first a Regional Player Development Centre and then a National Academy.

The National Academies – due to open in September 2019 – Loughborough University and Tennis Scotland at Stirling will set new, world-class standards for the holistic development of high-potential British players in transformative, full-time, residential, training environments. These programmes will nurture 14 to 18-year-olds (and sometimes younger) as people, players and performers. Players who demonstrate the greatest future potential in the sport will be selected and supported with world-class coaching, science, medicine, and welfare expertise, whilst also being provided an excellent mainstream education up to at least GCSE-level.

We are absolutely delighted to have been chosen by the LTA to host a National Academy at Loughborough University. This is an extremely exciting opportunity to create a world-class player development pathway for the best players in the UK, who have aspirations to go on to represent Great Britain and achieve success at the highest level in tennis.

Our world-class facilities, internationally recognised sports science offer and unique sporting ecosystem, combined with a partnership with Loughborough Endowed Schools Foundation, provides the structure and foundation to make the LTA’s vision a reality. We look forward to working closely with the LTA’s performance team and welcoming the first cohort of athletes in September 2019.

With an emphasis on creating a seamless player pathway for talent development, this new Performance Strategy marks a step-change in the LTA’s approach to developing a pipeline of future tennis champions. It’s fantastic to see the new player pathway start to become a reality with the confirmation of the National Academies, supported by our new Regional Player Development Centres.

The success of British players in recent years has given British Tennis a huge boost. Our priority now is building on this success, and we recognise that in the past we haven’t always been consistent enough in our approach to player development. The new performance strategy has been designed to help create future British tennis champions, who we hope will continue to inspire others to play, watch and enjoy the sport for generations to come.

I am also delighted that we will be able to tap into the extensive and diverse experience from Jamie, Sam and Tim and thank them for being generous enough to give back to the sport they have devoted so much of their lives to. They will play a critical role in strategically supporting the LTA’s Performance Team.

The single biggest challenge in developing a pipeline of future tennis champions in the UK is the lack of transformative, full-time, residential, pro-style training environments for our brightest talent in their teenage years.

That’s why I am delighted to announce Tennis Scotland at Stirling and Loughborough University as the homes of Great Britain’s first National Academies. They will be at the heart of our new player pathway for aspiring future champions. National Academies will offer our highest potential 18 and under players the opportunity to train together in a vibrant environment, with world-class facilities and the best coaches, science, medicine and welfare expertise, nurturing a new wave of talent and future British champions.

It’s our ambition to provide world-class support to players, coaches and parents and ensure they all have a seamless experience through the new performance pathway. Together with our new Regional Player Development Centres, our new National Academies will help us meet our objective of making GB one of the most respected tennis nations in the world for player development.

This is tremendous news, for the Bid team and for both Scottish and British Tennis. Scotland has enjoyed unprecedented levels of success in tennis with Andy and Jamie Murray, Gordon Reid and Colin Fleming. Players win Championships but systems enable players to win consistently. We look forward to working with Britain’s highest potential young tennis players, we want to work with the best and we believe we have the right experience, to recruit a world-class coaching and support team as shown with our formidable track record. Winning the National Academy helps us to enhance the world class sporting system in Scotland, and play a pivotal role in creating a pathway for champions that nurtures Britain’s highest potential players toward emulating Andy and Jamie’s successes.

In addition, the LTA has today named 11 new Regional Player Development Centres (RPDCs) across the UK. The RPDCs will provide quality support to high potential junior players aged between 10 and 14, and the right coaching and athletic development for those aiming to progress to a National Academy. The 11 centres will be based at the following locations:

More details about these academies and centres will be announced in the coming months.

To support the new Performance Strategy for tennis in Britain, the LTA has formed its first-ever Performance Advisory Group comprising of Jamie Delgado – coach to Andy Murray and former professional player; Sam Smith broadcaster and former British No.1 and Tim Henman, a former four-time Wimbledon semifinalist and world No.4, who will support the LTA in continually reviewing and evolving the performance strategy. This panel of experts will play a critical role in helping the LTA understand the perspective of aspiring players and better enable the Performance team to plan and deliver programmes that will allow talented players to fulfil their potential.

The entire player pathway will be underpinned by investment in a specialist coaching workforce for every age and stage of the pathway and a clear player development philosophy, as well as a focus on players’ physical and emotional wellbeing.