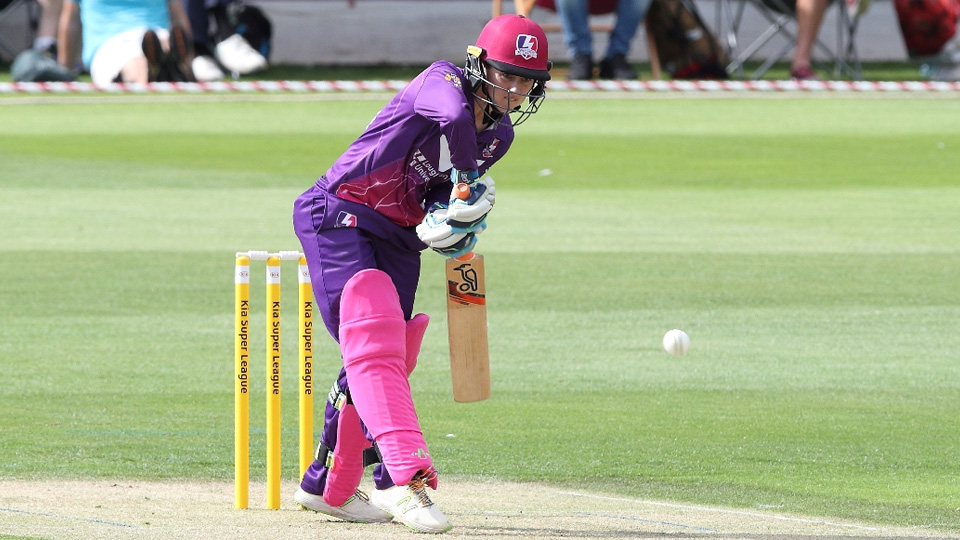 Playing in front of the a strong home crowd, Lightning made it 3 wins from 4 in the KSL

Loughborough Lightning Cricket played in front of a home crowd for the first time in almost year, putting on an entertaining display for the 600 strong crowd who’d come out to support to get the better of Yorkshire Diamonds. That result makes it three wins from four for Rob Taylor’s side, putting them in a brilliant position as the Kia Super League reaches its midway point.

From the off the side in purple were dominant, Player of the Match Rachael Haynes enjoying a fruitful partnership with Sophie Devine to reach her half century as Lightning set the visitors a target of 143/6. Ball in hand Jenny Gunn and Sophie Devine were on fine form, with the rest of the side contributing superbly to secure a 41 run victory.

Former Lightning player Beth Langston got proceedings underway, bowling for Yorkshire Diamonds, and she kept Lightning openers Rachael Haynes and Sophie Devine quiet until Haynes found a gap for a lovely four. An edge saw Haynes score another four off the second bowl of the second over as the pair started to patiently build a total, 22/0 at the end of the third.

Haynes really found her form in the fifth over, hitting three fours off the bowling of Davidson-Richards to reach 29 off 22 bowls, Devine opening the sixth with her first four of the match. The Kiwi was dropped with the second ball of that over but the pair racked up three further fours to take the score to 53 without loss.

Devine continued to entertain the large home crowd with a six off the first bowl of the seventh over, the pair flourishing until the New Zealander was caught by Monahan with the penultimate bowl of the tenth over. At the halfway point Lightning had amassed 80/1.

Amy Jones was next to join Haynes at the crease, the latter duly making her half century before being caught by a great Jayangani catch two balls later. That meant Jones was joined by Aussie Elyse Villani, the pair having combined outstandingly in the side’s maiden victory over Southern Vipers a week ago.

A boundary by Villani saw Lightning pass the 100 mark in the thirteenth over but she was then run out for 17, meaning it was captain Georgia Elwiss’ turn to take to the field. After such a strong start Lightning lost another wicket as Amy Jones was caught, the momentum now very much with the opposition.

After ticking over a steadily for the next three overs, Elwiss and Georgia Adams went for broke with six balls remaining, Adams bowled by Katherine Brunt, whilst Elwiss was run-out with the penultimate ball of the innings to leave Diamonds with a score of 143/6 to chase.

Lightning made a perfect start with the ball, Gunn conceding just five before Devine dismissed Winfield in the second over, Gunn taking the catch to leave Diamonds at 8/1 after two overs. Lightning’s defence was on fine form, forcing Diamonds to feed off scraps, Mooney eventually getting impatient and trying to clear the Lightning cover, but Devine was more than a match, taking the catch well off Gunn’s bowling. The Yorkshire side were trailing heavily with a score of 13/2 off five overs and would need to really up their game to claw their way back into the match.

Lucy Higham made an instant impact at the start of the seventh over, taking the wicket of Jayangani with her very first ball, Devine taking her second catch before young Sarah Glenn took the wicket of Brunt lbw in her first over. By the halfway point Diamonds had stuttered their way to 36/4 and the match was looking dead and buried.

A wild swing from Kimmince saw her dismissed from the bowling of Kirstie Gordon and two overs later Amy Jones stumped Davidson-Richards off Gordon’s bowling. Despite 12 runs from Georgia Elwiss’ bowling in the 15th over, including a six for another former Lightning player Thea Brookes, the home side kept the run rate extremely tight as the sun shone down brighter than ever on the Haslegrave Ground.

In the 18th over Gordon took a fine catch off the bowling of Devine, the pair both having a fantastic innings, leaving Diamonds to find 54 off two overs, an impossible task. Linsey Smith took her first wicket of the evening in the 19th over, the Yorkshire side adding just four more runs, before Jenny Gunn was tasked with closing the game out. She kept things tight, although Beth Langston did make a valiant effort for a six, which was caught on the boundary by Elyse Villani. Gunn conceded just two further runs, holding Diamonds to 102-9, winning by 41 runs.

We spoke this morning about being back at Loughborough, playing in front of a home crowd and the excitement that brings; the way the girls stood up and won that game was really pleasing.

We’ve won by 40 runs and there were still errors and areas we can improve on, so that’s really positive for us and really exciting. Hopefully this sets us up well for the rest of the week.

Starring at the top of the order with both bat and ball Sophie Devine added:

Me and Rachael are starting to build a really strong relationship at the top of the order and we complement each other really well. The other day I was at the top but today she was firing and that’s really important – it’s awesome for the team to get a big win and a bonus point after the Storm game, so we’re really pleased.