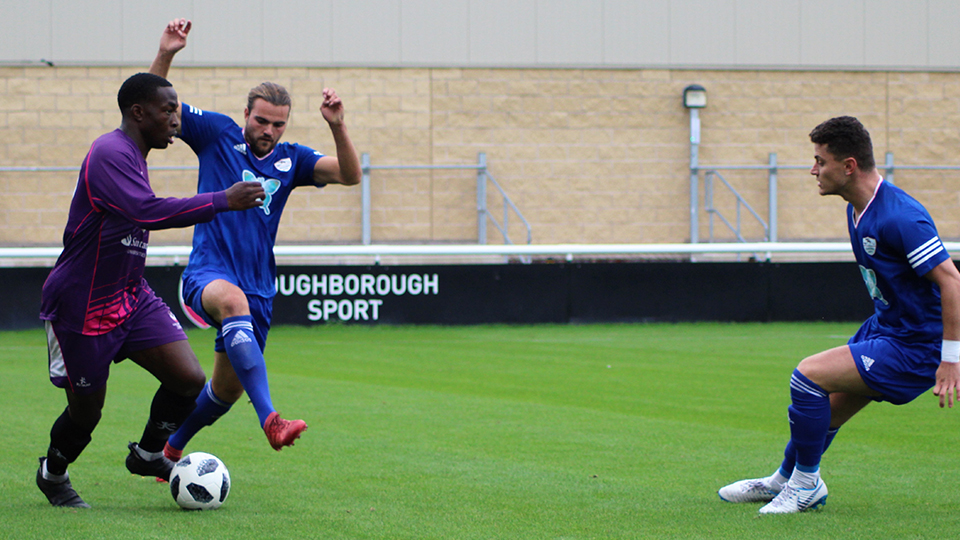 Loughborough University slipped to a 3-2 defeat at local rivals Quorn AFC despite a late comeback.

With two weekends of postponements plus an abandonment the Scholars looked to play their first game since the 4th December in the Total Motion MFL Premier Division. The break in fixtures sees the University playing catchup with games in hand over the teams above them, a win against Quorn would see a push toward mid-table before the end of 2018.

A cagey first 20 minutes saw neither team create any clear opportunities, the only effort from the scholars perspective saw Jeremiah Dasaolu cut into the box from the right only for his shot to saved comfortable by the hosts keeper.

From 20 minutes in the university started to dominate the game more, having the majority of possession and moving the ball around well up to the final third. With 15 minutes to go of the half some intricate build up play saw the returning Connor Smith beat two men on the edge the box setting up a left footed shot which went narrowly wide. Smith's effort was the closest both sides came to breaking the deadlock in the first half, despite Jacob Croud's best attempt from a 25 yard freekick on 38 minutes.

The second half saw Quorn come out of the blocks quickly. On 52 minutes Conor O'Keefe was forced into great save from a shot just on the right hand side of the box. The fast start from Quorn was rewarded on 60 minutes when a free header from a corner was tipped onto the bar by O'Keefe, but the ever lively and former Scholar Shay Brennan tucked the rebound home to make it 1-0.

Quorn were quick to capitalise on their lead, with only 5 minutes being played before Alex Morris headed home at the back post from a cross on the left.

Two goals in the first 15 minutes of the second half rocked the scholars, but they were back in it on 68 minutes when against the run of play Jordan Slack cut in from the right hand side to curl his left footed effort in the far corner past the outstretched Quorn keeper. The goal spurred Loughborough University on to look for for an equaliser. This could have come when good work from Jeremiah Dasaolu saw him slip through Connor Smith in the area, Smith then went down after a tangle with the Quorn rightback but no penalty was awarded much to the surprise of Smith and the Loughborough bench. However, this did not deter the students who continued to press for a second.

With 10 minutes to go an intricate through ball by Jay Galloway put Smith through on goal again, after breaking away from his marker he calmly slotted the ball home into the bottom right hand corner making it 2-2.

After the equaliser both teams looked for a third goal to take all 3 points. With 5 minutes to go the students were on the recieving end of a cruel Quorn winner when Billy Howard struck an effort goalward from the edge of the area, and a shot that would have probably been a comfortable save for O'keefe was deflected into the opposite corner to which O'Keefe was travelling.

Despite the best effort of the Scholars, Quorn saw out the game to claim the 3 points and go 9th in the table. The scholars remain 16th with games in hand. With no game on the 29th December, the students return to action when they host Stourport Swifts at Loughborough University Stadium on the 5th January.