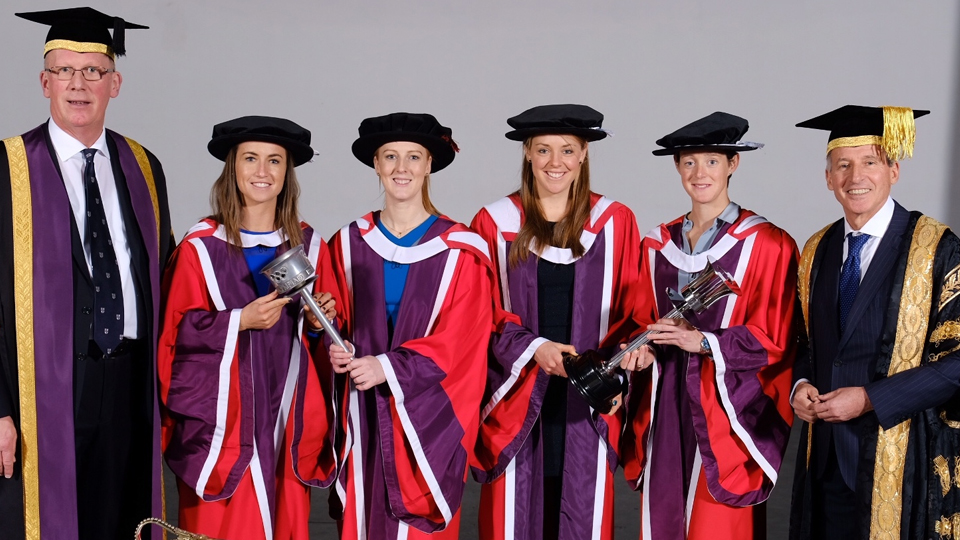 Loughborough University celebrated the achievements of hundreds of students at its winter graduation ceremonies yesterday and awarded honorary degrees to four Olympic hockey gold medallists that have done wonders for the sport.

Team GB’s Women’s Hockey team captivated audiences around the world two years ago with a series of incredible performances at the 2016 Rio Olympics.

The team took Gold for the first time in women’s hockey history and among the players were Loughborough alumnae Dr Hannah MacLeod, Madeleine Hinch, Nicola White and Giselle Ansley.

The hockey final in Brazil against reigning champions the Netherlands was gripping from start to finish and the impact of the team’s achievements can be seen in the public’s reaction to their win.

Since the team won Gold, it has been reported that more than 10,000 new players have been inspired to pick up a hockey stick and join a club, and since the 2012 London Olympics – where the team secured Bronze – the number of young girls in hockey has doubled.

All four players have been awarded MBEs in the Queen's New Year Honours for their contribution to the sport and achievements in Rio.

They returned to campus yesterday (Monday 17 December) to receive honorary doctorates from the University they all once studied at.

Hannah, Madeleine and Giselle graduated with a BSc in Sport and Exercise Science in 2005, 2013 and 2014, respectively, and Nicola graduated from Loughborough College in 2013 with a BSc in Applied Sports Science.

“Although two years have now passed, the excitement and impact of Team GB’s exhilarating performance at the 2016 Rio Olympics lives on.

“Amongst the throng of incredible performances, there was one team that really captured the nation’s heart with their winning ways: Team GB’s Women’s Hockey team.

“It is with great pride that I stand here with these four outstanding Loughborough alumnae today.”