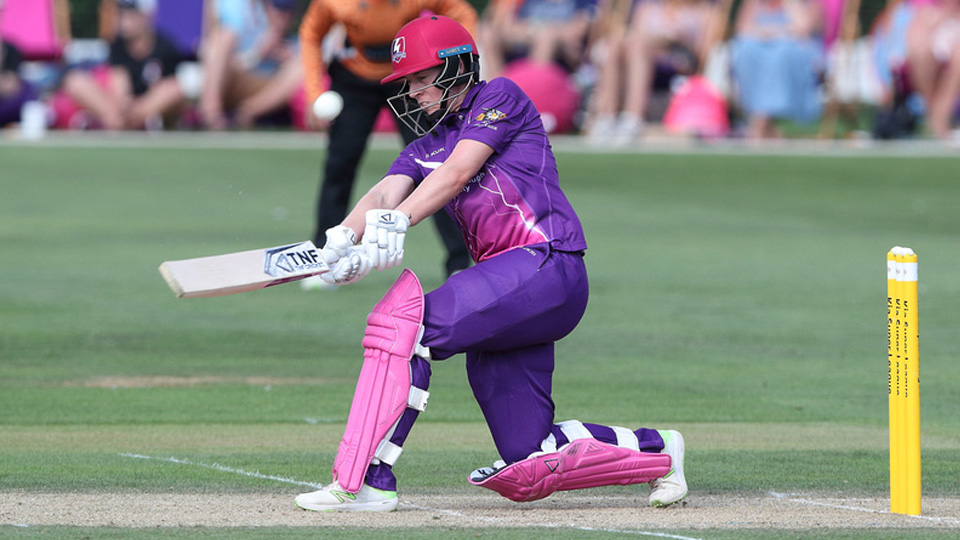 Lightning Cricket continued their outstanding run of form in the 2018 Kia Super League, player of the match Elyse Villani hitting a six with the third last ball of the game to clinch victory

Vipers were much improved from their previous five outings, a measured batting performance seeing them set an extremely strong 172/6 target for the hosts to chase. On course the whole way, the side in purple started to falter slightly in the final few overs, but seasoned Australian international Villani kept her cool, hitting 11 from four balls in the final over to secure Lightning’s third home win in five days.

Vipers won the toss and chose to bat first, making seven without loss in the opening over, Suzie Bates hitting a nice four before Danni Wyatt did the same off the bowling of captain Elwiss in the second.

Australian Haynes, who hit a half century on Tuesday, was fielding superbly well and that was rewarded with a great catch at the National Performance Centre end of the ground, Elwiss’ bowling leading to the dismissal of du Preez for 24. In the 14th over Sara McGlashan found her form for Vipers hitting four fours off the bowling of Linsey Smith to take the Southampton based side into triple figures.

It is well known that confidence is a key attribute in cricket and that seemingly set Vipers on their way, McGlashan and Brindle making a 50 partnership in the 18th over as they started to play more aggressively, hitting a number of fours. Finally Lightning made some inroads; Elwiss took the wicket of Brindle lbw with the final ball of the penultimate over, but McGlashan did hit a huge six and a four before Devine took her second wicket of the innings, dismissing Kerr for a duck.

By the end of the innings Southern Vipers had made 172/6, McGlashan closing out the innings with yet another six to finish 55 not out, leaving the home side with a big chase on their hands.

Haynes and Devine opened the batting for Lightning once more, Devine hitting a massive six in the opening over, but two overs later she edged it behind and was caught by Rudd, leaving Lightning at 15/1. Despite that early wicket the home side were firing on all cylinders, Haynes hitting a pair of sixes and three fours to quickly push the side in purple beyond 50 early in the sixth over, ahead of the 8.6 required run rate.

With Amy Jones and Haynes continuing to rack up the runs, a number of fours a piece, the chase was going well, however Jones went for 31 in ninth over, caught by Wyatt off the bowling of Bates, which saw Elyse Villani enter the fray. The Australian quickly found her rhythm, a couple of fours interspersed among a steady flow of singles, her compatriot Haynes securing her half century. In the very next over Haynes lost her wicket, du Preez making the catch from the bowling of Brindle, leaving Lightning at 106/3, still ahead of the required schedule.

Captain Elwiss was next to the crease to partner Villani, who hit a huge six in the 13th over before Arran Brindle bravely tried to take a catch off her own bowling, but in doing so sustained a hand injury, forcing her off to be replaced by Maia Bouchier. That meant former Lightning player Paige Scholfield finished the over off, Villani hitting two further fours. Vipers suffered another injury as Tash Farrant tried to prevent yet another Villani boundary – she too left the field of play to be replaced by Charlie Dean, further weakening their attack.

Elwiss was run out for seven, so it was Georgia Adams who was tasked with helping Villani get the job done and with four overs remaining things were looking good, Lightning 144/4. As they say though, ‘it’s never over ‘til it’s over’ and that proved to be the case, Vipers showing the resilience that has perhaps been missing for them so far this season, as they restricted Lightning to just 12 off 12 balls as Adams was caught. Two further wickets fell in the 19th over, Gunn for six and Higham for one, meaning Lightning needed 11 from the final six balls to secure the win.

Singles from Villani and Glenn meant nine were needed from four balls, and you could cut the atmosphere with a knife. However one woman kept her composure and that’s why she is one of the best players in the world. Rounding out a match winning innings, Elyse Villani hit a four and a six from the next two balls to seal victory, Lightning score 174/7 to win by three wickets.

Post-match a delighted player of the match Elyse Villani, who racked up 61 not out today, said:

That was nice! There’s a great atmosphere here at Haslegrave and it’s nice to have momentum and be winning at the moment. It was nice to get some time out in the middle to be honest.

I live with Rach and Soph at the moment and I was saying after the last game that I didn’t really get any balls in the field and I didn’t get a chance to bat, so I sort of felt like a specialist fielder! The girls have been doing so well at the top so I’m just hoping to play my role when I get the chance and it was great to be part of a big win today.