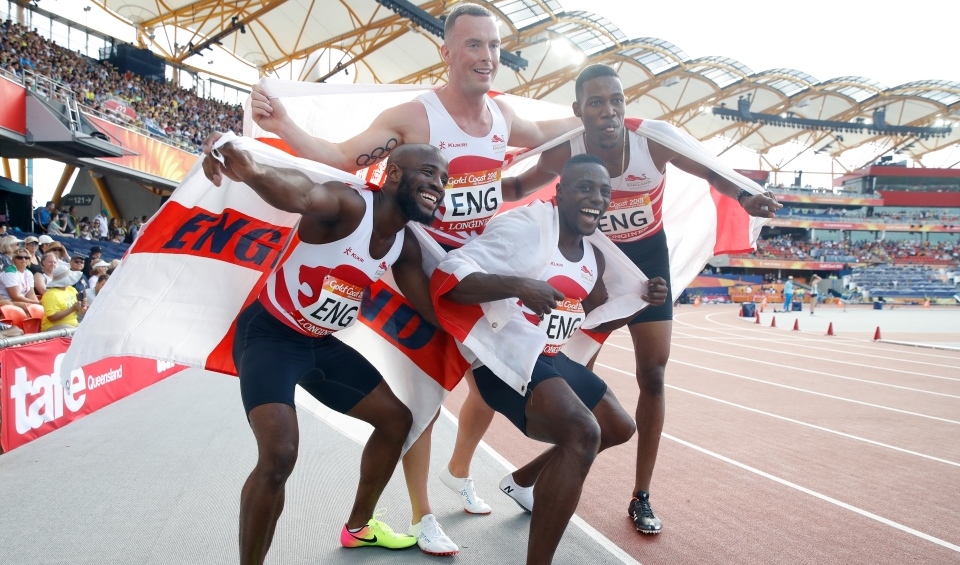 On the tenth day of the 2018 Commonwealth Games, an incredible six medals were won by Loughborough athletes.

Loughborough-graduate Harry Aikines-Aryeetey managed to improve on his silver from Glasgow today, taking gold with his England team mates in the men’s 4x100m relay final. They stormed to a win in a time of 38.13s, ahead of South Africa and sprint-giants Jamaica who finished third. Harry ran the last leg of the relay against Jamaica’s Yohan Blake, the second fastest man of all time, and against South Africa’s Akani Simbine, who won the 100m final earlier this week.

Harry now holds medals in the relay from the Commonwealth Games, the World Championships and the European Championships, which is an incredibly impressive feat.

He commented: “I did what I did to hang on. I tried to make sure the team was where we needed to be to stay first. We're so proud to represent our nation. This is what we're about, we've been cheering for our teammates and our teammates have been cheering for us. No one understands that this sport may be small to some, but it is massive to us. For the people who came out and supported us, thank you.”

Lake said: “It's my first championship medal and it's silver, so I'm definitely happy with that. I've been in really good shape, so I had nothing to lose. I think I had a really good last attempt at it. It was a risk I was willing to take. Even though the height wasn't exactly what I wanted I think I competed really well and felt comfortable in this environment.”

Alum Jake Wightman made history today as he won Scotland’s first men’s Commonwealth Games medal in the 1500m in over 40 years. He managed to bag his first international medal on the senior stage in his second final of the Commonwealth Games. He ran a great time of 3:35.97s.

On his historic performance said: “This was my last chance for a medal today, so to bring something back to Scotland to share is a great result. I haven't been to too many Games, but it's definitely up there as one of the best experiences for me.”

On the netball court today, England women went up against Jamaica in the women’s netball semi-finals. It was an incredibly intense game which saw the two teams battle it out for the win all the way until the end. Alumni Ama Agbeze, Beth Cobden, Jade Clarke and Jo Harten made history today as they managed to get team England to its first ever Commonwealth Games final. England has not reached a global final since 1975 and have never won a major title. This was all made possible by alumna Jo Harten who saved the day by netting the winner with just one second left on the clock. She scored 16 of the points today, and the match finished 56-55. This means England will play for gold tomorrow against Australia.

On the hockey pitch, alumni Giselle Ansley, Laura Unsworth, Suzy Petty, and current student Ellie Rayer powered through in their bronze match against India. They managed to score a total of six goals against them, with four goals being scored in the last period alone to secure the bronze medal.

In basketball current student Mollie Campbell and graduate Georgia Jones helped England take silver in a hard-fought match against Australia, who won the game with a final score of 55-99.

Other Loughborough athletes who did well today were alumna Emily Diamond and Loughborough-based Anyika Onoura who contested the women’s 4x400m relay final. They finished fourth with a time of 3:27.21s in a fast final which saw Jamaica take the gold. Current student Kirsten McAslan also contested the same event but for her native Scotland. Her team placed sixth with a new national record time of 3:29.18s.

On the rugby pitch, alumna Elinor Snowsill (WALES), played against England today but unfortunately lost 0-45. She and her team go up against Kenya tomorrow to battle for a top five finish.