Ian’s sculptures explore the ambiguous forces of nature and the language of sculpture in terms of form and balance – often playfully seeming to defy gravity and time. His choice of found materials gives his work a visceral and surreal quality, inviting viewers to experience the decay of man-made structures as nature slowly reclaims her own.

Award-winning artist Ian Tricker graduated with First Class Honours in Fine Art in 2013, and is rapidly earning an enviable position in the art world.

Since graduating he has shown his work at 11 exhibitions including FBA Futures at Mall Galleries, London; China’s Made in England (2013-4); and the Free Range Graduate Exhibition 2013. He is also among the 55 promising artists selected by Bloomberg New Contemporaries 2014.

He has also won several awards including the University’s Glendonbrook Enterprise and Innovation Award 2013; the Edward Sharpe Award and Commission 2013; the Emerging Artist Award at Free Range 2013; the Verve Open Sculpture Competition 2014; and, most recently, was named Studio Champion at the University’s Think BIG 2014 business competition.

To date, he has undertaken two commissions: The Sound of Time – created for Charnwood Borough Council which celebrates Loughborough’s musical and industrial heritage – and a new piece for the University. He is also supported by DegreeArt.com and has sold a number of works through the online gallery.

Artists often struggle to find a suitable platform from which to share their work, and many talented practitioners go unrecognised.

Keen to establish a name for himself and a market for his work, Ian joined the Studio to develop the business knowledge and skills to succeed in the highly competitive and notoriously exclusive art world.

How has being a Studio tenant helped you to progress your business?

The support it offers is second to none and the Head of the Studio, Megan, is fantastic. She understands all of us – and our businesses – and really wants us to succeed. She is always there to congratulate our successes and offer encouragement and help during the hard times too.

Being a Studio tenant gives me access to all of the campus faculties, including the Library, which is really important to me and my business.

The Studio also provides funding and support to develop your business plan. Money is essential to get your business off the ground and drive it forward. Without this help, I wouldn’t have achieved anywhere near as much as I have.

A year into your tenancy – what are you up to?

I am currently working on a new website with the help of previous Studio tenants, Future Fresh.

These days, having an online gallery is an invaluable shop-front for potential clients. A recent World-Arts.com article notes that the art market is currently worth £1.57bn and is set to double by 2018. For an artist, it’s a very exciting time…

As a side job and to keep the bills at bay, I occasionally work on theming adventure golf courses. These projects – creating pirates, dinosaurs and other entertaining objects to dress the course – are really fun to do.

What advice would you give to anyone considering a Studio residency?

If you’re thinking of joining the Studio, you’ll be surprised just how much you learn – not only about launching a business, but also about yourself. I’ve certainly discovered a lot about being Ian Tricker - 21st century artist! 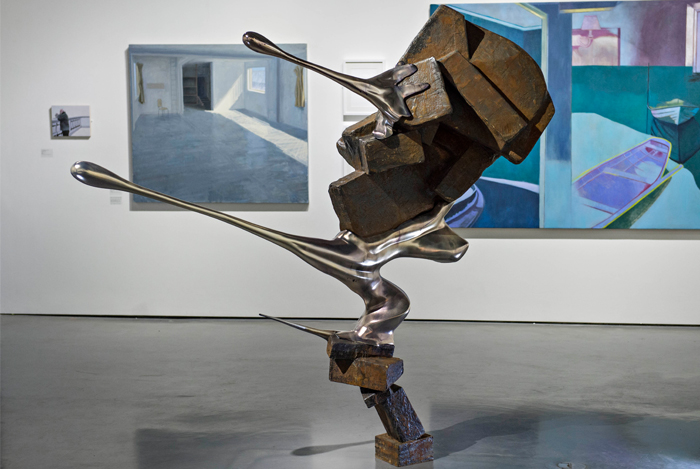