A staggering number of people joined in the celebrations and attendees from a range of Schools/Departments and Professional Services fully embraced the opportunity to network with one another whilst learning more about doctoral research conducted at the University.

At the start of the Summer Showcase, the Director of the Doctoral College, Professor Andrew Dainty, took to the stage and extended a warm welcome to everyone in attendance. Then the Pro-Vice Chancellor of Research, Professor Steve Rothberg, spoke about the University’s new Research Strategy, CALIBRE, and in particular, the crucial contribution Doctoral Researchers make towards it. 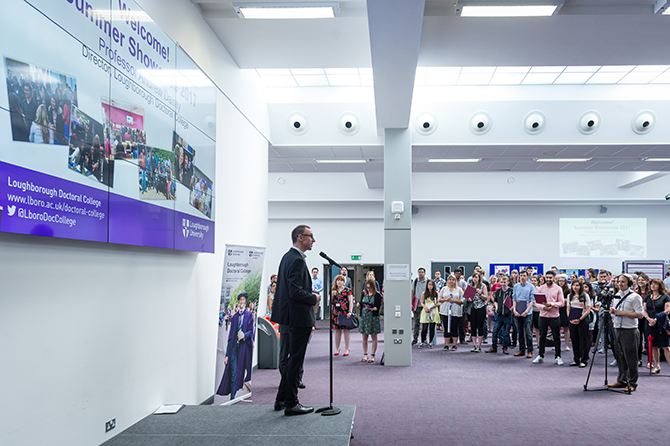 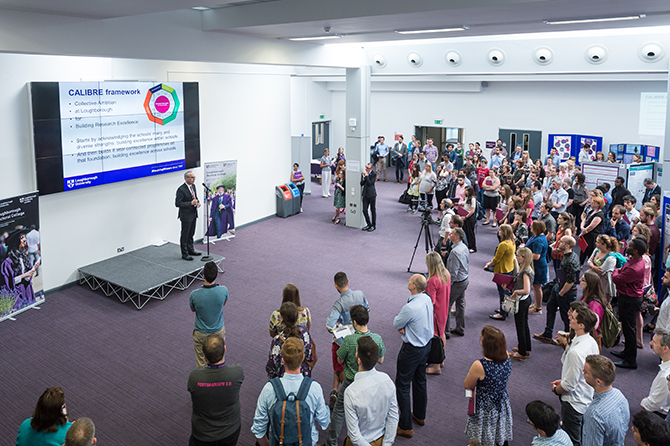 Just before the official launch of the Loughborough Doctoral College, Professor Dainty took to the stage again, this time to bid a fond farewell to the Graduate School and to share some of the impressive achievements from the last year, such as:

Afterwards, Professor Dainty explained the significance of becoming a Doctoral College, including its role in achieving the “Educating for success” theme of the University’s Research Strategy CALIBRE.

Then the big moment arrived…the launch of the Loughborough Doctoral College! 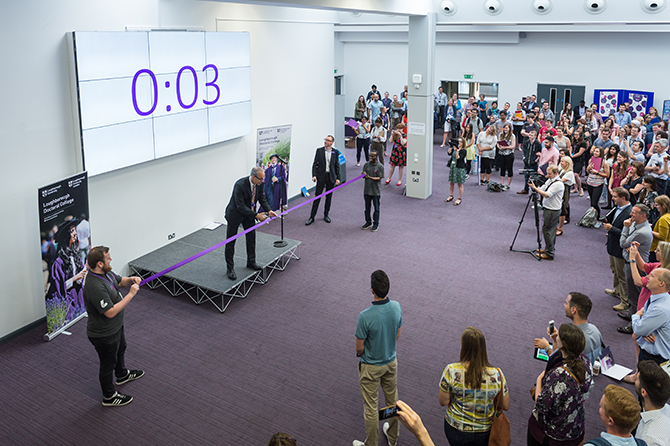 Immediately after the countdown clock hit “0” there was a huge cheer and applause as Professor Rothberg cut the ribbon to indicate that the Loughborough Doctoral College was officially open for business! It was immensely exciting! 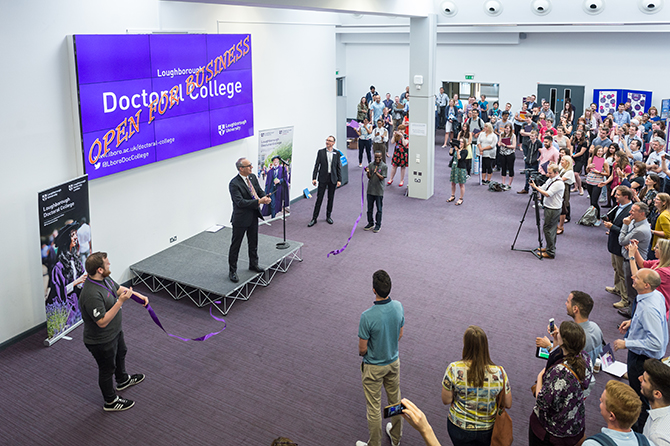 After the launch, Professor Dainty paid thanks and acknowledgement to all those involved in the creation of the Loughborough Doctoral College:

Then it was time to announce the start of the poster competition. In total 102 posters were displayed (the largest poster competition we have ever had!) and over 53 members of academic and professional service staff came to judge! There’s was certainly a real buzz of activity in the exhibition area! 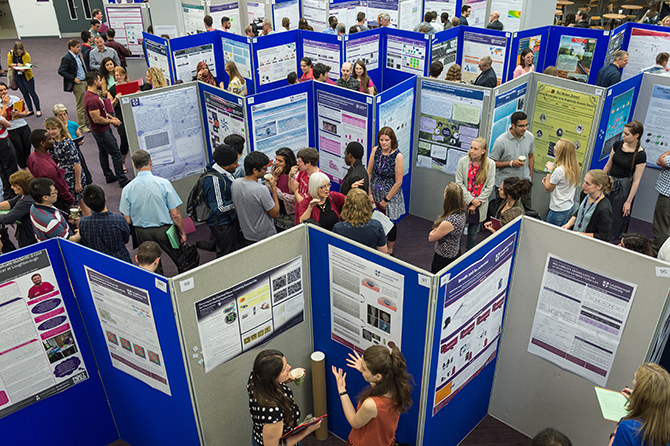 Following the poster competition was the eagarly awaited Three Minute Thesis Final; a tense and energetic competition whereby Doctoral Researchers were required to explain their research succinctly to a non-specialist audience, in just three minutes, using one static slide! All seven competitors, as listed below, did exceptionally well and managed to keep within the time limit!

The final event of the Summer Showcase saw the five Research Beacon Leaders from the University’s Research Stategy, CALIBRE, take it in turns to explain the breadth of research activity that they coordinate and how Doctoral Researchers can get involved. To keep things fair we thought it only right to set a three minute time limit for them too - although not all managed to keep to it!...

To conclude the Summer Showcase, Professor Dainty thanked everyone for their contributions and led the prize ceremony - details of which are provided below - well done to all!

The Research Student Prizes are awarded each year to full-time or part-time Doctoral Researchers who have progressed beyond the first year of their research student registration, for outstanding academic performance and academic achievement. This year 24 nominations were made and the panel noted that all were exceptional.

"Matthew evidences an outstanding record of publication including papers in two leading peer-reviewed journals. He has a burgeoning international profile having presenting at leading international conferences and symposia and has developed a global collaborative network. Matther contributes significantly to the Athena SWAN initative, as well as enhancing doctoral researcher life within his School" 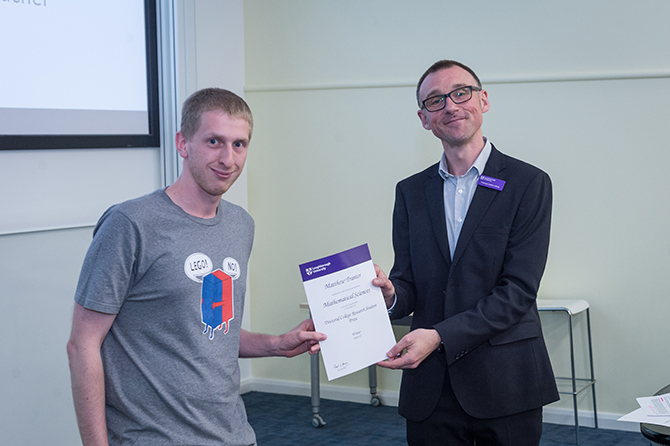 "Omid has an outstanding record of publications from his doctoral studies. His nomination evidenced a strong connection with industry, including a secondment to Proctor & Gamble in the USA. Omid has presented work internationally, and at leading conferences and symposia across Europe" 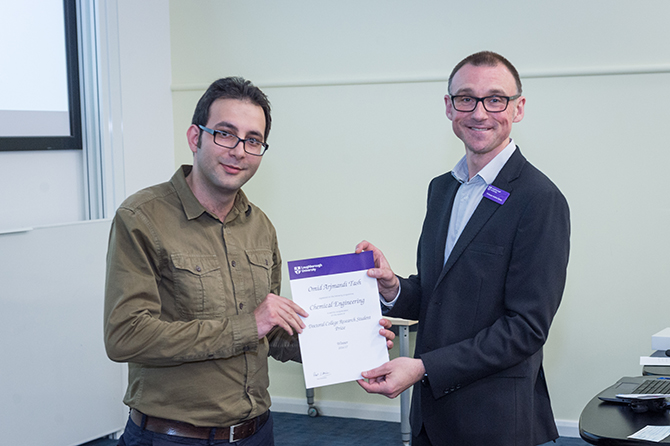 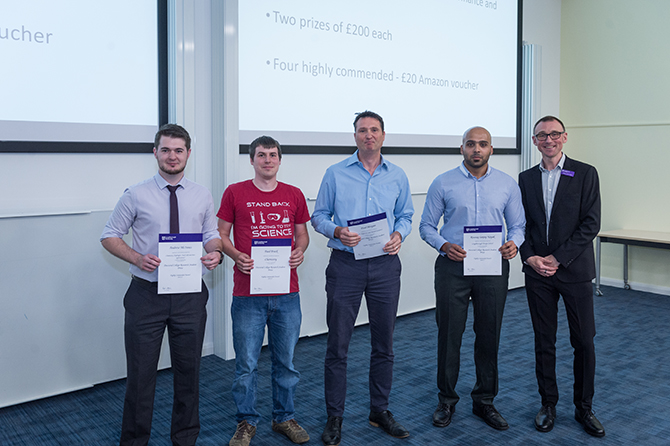 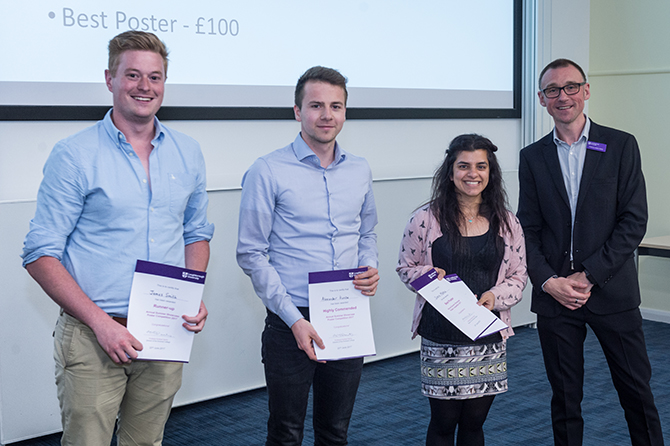 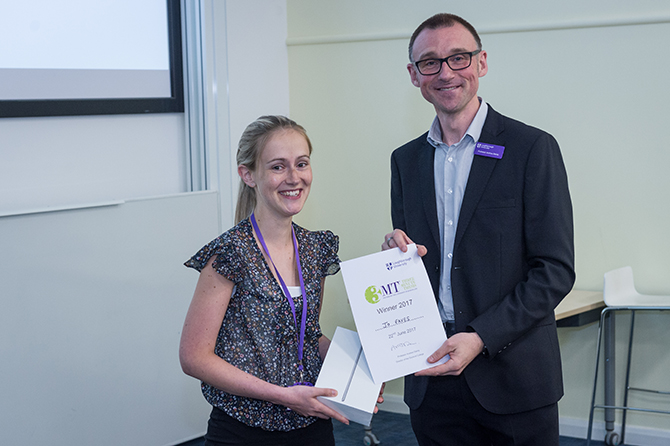 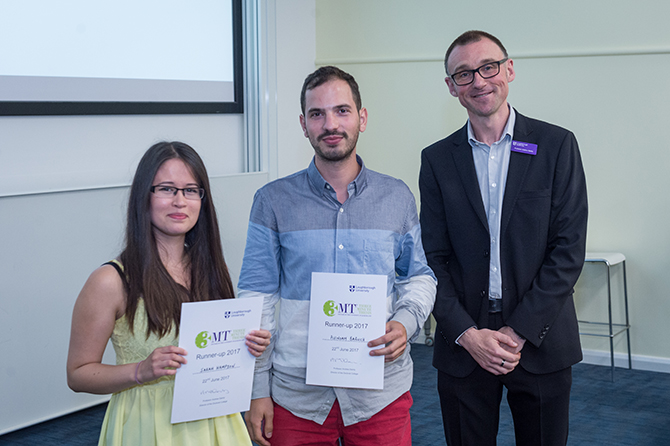 We hope that everyone who attended the Annual Summer Showcase and Doctoral College Launch had a great time and we hope to see you at many more Doctoral College events in the very near future!

For TRAINING and DEVELOPMENT queries

For ADMINISTRATIVE queries about your PhD