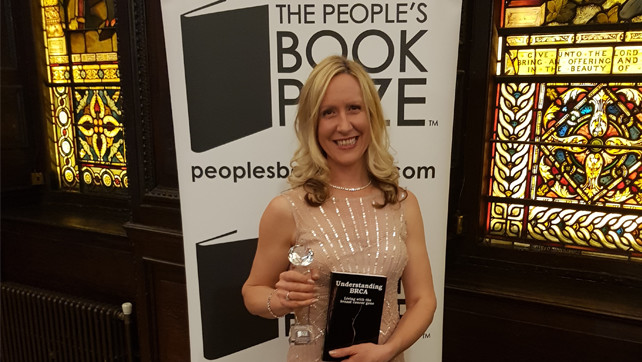 Clarissa Foster who graduated in 1999 with a BSc in Human Biology has won the Beryl Bainbridge First Time Author Award at the 2019 People's Book Prize for her work "Understanding BRCA".

Clarissa took home the Beryl Bainbridge First Time Author Award at the awards ceremony in London on 8 May.

The People’s Book Prize is a yearly competition, the winners voted for by the general public. There are three main categories – fiction, non-fiction and children’s – as well as prizes for First Time Author, Best Publisher and Best Achievement.

This is not the first time Clarissa’s book has seen success, with it having been highly commended by the British Medical Association last September.

The book, published in November 2017, aims to raise awareness of BRCA gene mutations, which increases the risk of various types of cancer.

It explains what it means to carry a harmful BRCA gene mutation and the management options available to BRCA mutation carriers. This includes screening for early detection, risk-reducing surgery and chemoprevention - the use of drugs to lower the risk of developing cancer - with reference to relevant research.

Clarissa graduated in 1999 with a BSc in Human Biology and is now a Human Biology teacher in Further Education. She has previously undergone risk-reducing surgery to reduce her own lifetime risk of developing breast and ovarian cancer.

Commenting on her success, Clarissa said:

“I am over the moon to have won ‘The Beryl Bainbridge First Time Author Award’ at The Finals of The People’s Book Prize, which was made possible by the many, many people who supported and voted for me - thank you to all who voted!

“Being a part of this prestigious book award has offered a fantastic platform to help raise much-needed further awareness of BRCA gene mutations, and the support I am offering to those, like myself, who are at an extremely high risk of developing breast and ovarian cancer during their lifetime.”

You can find out more about the book online.

Congratulations to Clarissa on her success.