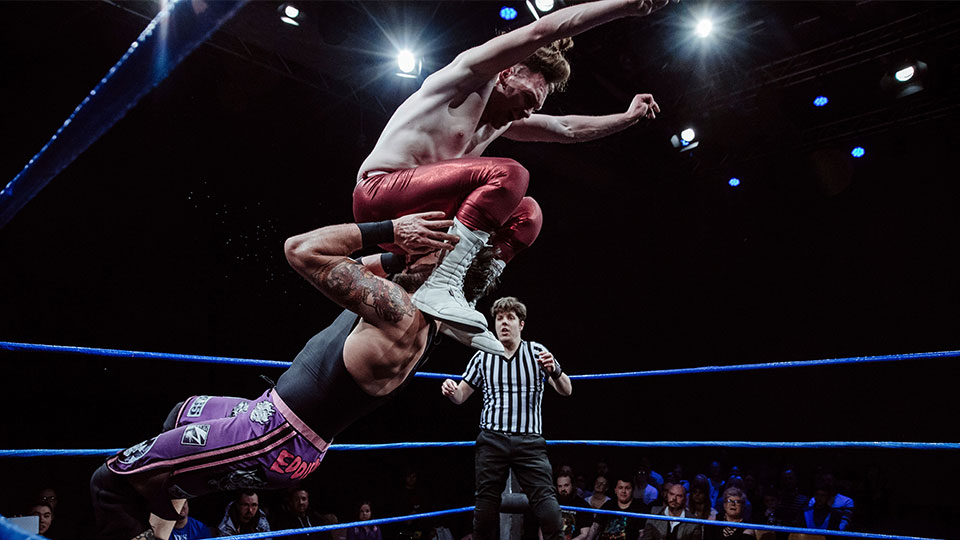 The Martin Hall Theatre will be opening its doors for the first time to new and old wrestling fans as part of Loughborough University’s Arts Festival.

Dr Claire Warden, Senior Lecturer in English and Drama, specialises in historical theatre and is fascinated with the elements of wrestling. She is the academic lead and commissioner for the Wrestling Resurgence project – which was set up in 2017 - and aims to explore wrestling as an artistic practice through live shows across the East Midlands.

Speaking about the event, she commented: “To me, wrestling is about having a great evening out with friends: cheering and booing and marvelling at the athleticism.

“Wrestling shows are a real mixture, so you can go from laughing at a comedy match one minute to feeling furious or frightened the next. It is quite a unique art form in that regard. It appeals to so many different types of people; we always welcome a lot of young people to our shows too.

“We are delighted that LU Arts Festival has programmed Wrestling Resurgence's 'Angry Dancing' in June. We are looking forward to welcoming back fans who have followed the company from the start, new fans who love wrestling, but also people who have never seen wrestling before. There will definitely be something for everyone.”

Ten years ago, the world of British professional wrestling seemed non-existent. Now, British wrestling – with its diverse fan base and artistic quality – is selling out venues across the UK and has become ‘one of the UK’s cultural success stories of the twenty-first century’.

Not only will there be the return of the famous 'fans bring the crayons' Artcore match, but also performing on the night for the main event will be Jack Sexsmith – the pansexual phenomena defending his Wrestling Resurgence Championship title – and Gene Munny, one of the liveliest wrestling performers in the UK.

Also performing on the night will be:

The event takes place from 7pm-10pm and doors open from 6pm. Individual tickets are priced from £12-£20 and can be purchased online here.

This event is family-friendly, but under-14’s must be accompanied by an adult.

This project will explore the capacities and potentials of the human body through a series of workshops. More information can be found online.

The Arts Festival is a celebration of the creative, visual and performing arts at the University, showcasing the talents of students and academics. Over the course of the festival there is an exciting programme of performances, workshops, exhibitions, screenings and talks to attend, with many of them free and open for all to attend.