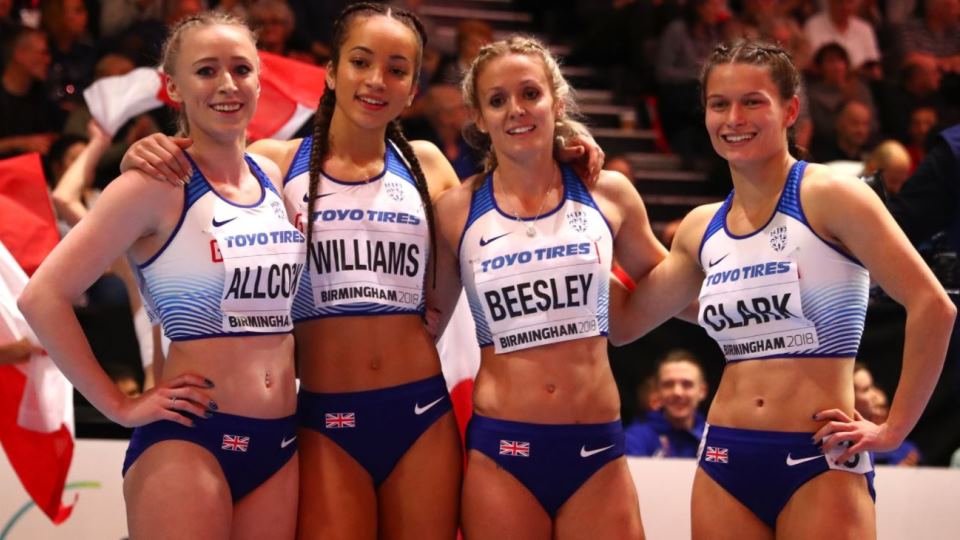 Amy Allcock and Meghan Beesley have today returned to Loughborough with silverware after combining as part of the bronze medal winning Great Britain 4x400m relay quartet at the World Indoor Championships in Birmingham.

Sunday delivered a brilliant finale to yet another home championships, as Loughborough based Andrew Pozzi also rose to the challenge, winning the first GB male medal at Birmingham 2018, clinching his first world title.

After a brilliant run to win his semi-final, the British co-captain performed when it mattered most, adding the 60m hurdles gold to the European equivalent he won 12 months ago.

Back with the women’s relay and there were a plethora of emotions as the British quartet were eventually awarded the bronze medal after initially crossing the finish line in fourth place. There was a pause in celebrations though as they were themselves disqualified, before eventually being reinstated and climbing onto the podium to receive their medals.

A quartet of Loughborough alumni were involved, Beesley and Allcock winning the medals, whilst their coaches Michael Baker and Glyn Hawkes also honed their craft whilst studying themselves and in the years since graduating, with both men still based on campus.

“I think I’m a bit overwhelmed by it all. It’s just so nice to be part of the team again. I’ve had a few years being injured but it’s great to be with these girls. It’s just really exciting. This is my first final where we’ve won a medal. I was in the team a few years ago when we broke the British record but I was a reserve, so this is just great to run in the final and be on the podium.”

“This has been the most surreal, brilliant, intense, crazy day! Coming away as a world medallist I just can’t believe it. Indoors has been insane but I couldn't have done it without the best coach – I wouldn’t be anywhere without him.”

On the opening night, second year psychology student Morgan Lake performed admirably to finish fourth in the women’s high jump, the 20 year old’s best performance to date in a senior global championship. Clearing an impressive 1.93m season’s best when it mattered most, Lake will now head to Australia for the Commonwealth Games full of confidence and with her eyes firmly on a medal.

On her performance in Birmingham, which made history as the best ever by a Brit in this event, she said:

“I was pretty nervous at the beginning, I'm not sure why. I had a good jump in warm up so I was feeling confident, but the first height wasn't ideal but I got over it and then performed pretty well.

“At 1.96m I knew it was a PB but I was feeling confident. I am never going to talk myself down in my head. I always think I am going to clear the bar but on this occasion I didn't. Fuzz [Caan, her coach] was reminding me of the process and saying that I have done all the work and this is the moment to enjoy it. That definitely helped in the competition.”

It wasn’t to be in the men’s equivalent for Robbie Grabaraz as finished down in ninth place after an injury disrupted couple of months.

Having won his heat in fine style alumnus Jake Wightman had to settle for sixth in the final of the men’s 1500m after an almighty burn-up over the last four laps. With no one keen to take up the pace the field were jogging in the opening stages before the attacks started, Wightman just getting caught out of position and having to expend energy to haul himself up into contention, eventually running out of gas.

“I’m a big gutted - I was hoping to be in contention. It was always going to be anybody’s race but I didn’t get it right today. I left myself too much to do and surged at the wrong point so it’s not a very pleasing day for me. I’m going to get back into training and then I head out to Australia next week and start the build up to Commonwealths.”

There was also a Great Britain debut for young hurdler Megan Marrs, the Northern Irish woman lining up in the 60 metre hurdles. Competing at her first international championship, the first year student has taken a staggering 0.44 of a second off her personal best this year, and ran a strong race in Birmingham but couldn’t quite do enough to advance to the semi-finals. Crossing the line sixth in 8.28, just outside her PB, the youngster could be proud of her effort at the very start of her international career.

To arrange an interview with one of our experts please contact the press office on 01509 223491. Bookings can be made online via www.globelynx.com