Students from the School of the Arts, English and Drama are set to exhibit their final degree work at the 2017 Arts Degree Show, which opens to the public on 10 June. 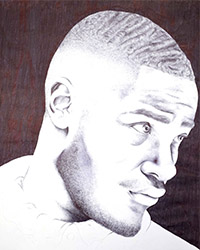 Loughborough arts graduates have a strong reputation of building careers in a range of occupations, with many enterprising students going on to contribute to the UK’s outstanding role within the arts and creative industries.

The show is an opportunity for potential employers, friends, family, industry and members of the public to view their work.

Notable works in the exhibition include Jung A Chang’s alternate wrestling world where fiction and reality are blurred, satirising post-Brexit society and President Trump.

Isabel Duncan’s interest in using art for good causes led her to work with a medical education company, influencing her creation of reformatted bilingual picture books to help language acquisition.

Sophie Harrison will exhibit a collection of materials for automotive interiors, imagining what future driving environments will look like in the advent of driverless cars.

Striking portraiture by Habib Hajallie explores cultural identity and the representation of marginalised ethnic groups in mainstream media. In 2016, he won the Fine Art Guild’s Jorge Aguilar-Agon Student Artist Award and has exhibited across the country.

This year’s students have amassed a string of awards, with work on display from Rose Moorman, the 2017 Society of Dyers & Colourists International Design Competition UK winner. She will go on to represent the country in the World Finals in Sri Lanka later this year. Rose was also awarded a Worshipful Company of Weavers’ scholarship and reached the finals in this year’s Textile Society Student Awards.

Louisa Taylor, a print designer and illustrator, was the Standfast and Barracks Live project winner this year. She also won the Whittards of Chelsea Design Competition for her autumnal tea caddy concept.

Professor Alison Yarrington, Dean of the School of the Arts, English and Drama, commented: “The work which you will encounter in the show is imaginative, adventurous and thought-provoking, bringing the individual and unique talents of our final-year students into an inspiring collective event.

“This diverse and rich display is the outcome of their application, talents and skills which have developed in an open and supportive environment, underpinned by rigorous theoretical and critical debate.”

The degree show is open to the public from 10 – 18 June, every day from 10am – 5pm at the Edward Barnsley Building, Loughborough University.

Further information is available on the degree show website.