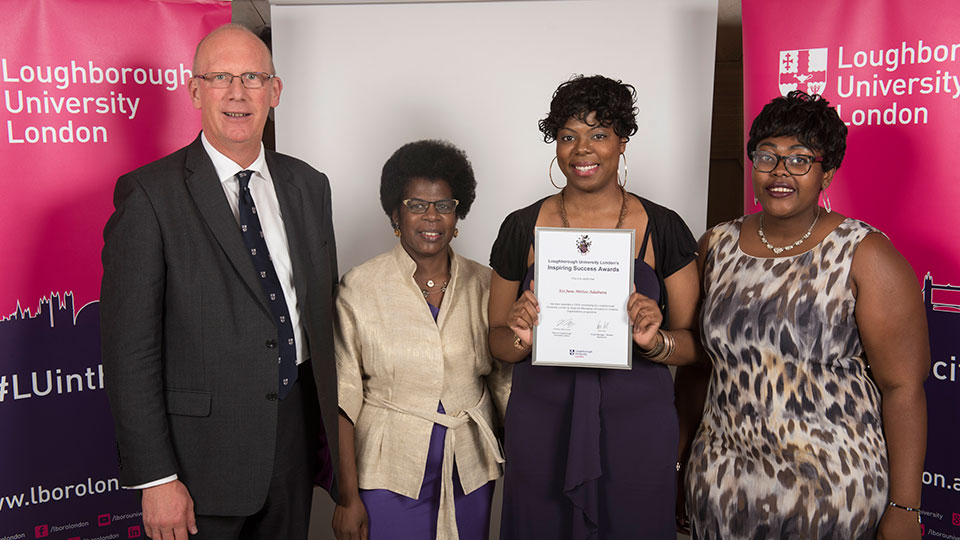 Loughborough University London honoured the achievements of its first Inspiring Success graduating scholars on Thursday September 15 and announced the winners for 2016.

Each year Loughborough University London offers people from across the East London boroughs financial support to study for a Masters at its Queen Elizabeth Olympic Park campus.

The University has partnered with the London Legacy Development Corporation to provide the Inspiring Success Programme and Scholarships, open to unemployed and under-employed recent graduates from the boroughs of Hackney, Newham, Tower Hamlets and Waltham Forest.

It is estimated that there are more than 2,000 graduates living in East London struggling to find graduate level employment. The Inspiring Success Programme was established to tackle this problem by offering up to 50 people from East London the opportunity to join a two day employability workshop.

Attendees are then invited to apply for one of ten Inspiring Success Scholarships, which provide 100% funding to study on one of Loughborough University London’s postgraduate programmes.

The Inspiring Success Awards evening brought together the graduating scholars and the successful applicants for this year’s intake. It was led by Loughborough University Vice Chancellor Professor Robert Allison.

“The Legacy of the London 2012 Olympic Games continues to be truly transformational for East London. I believe our Inspiring Success Programme and the linked Scholarships to study at our campus in London offer a truly transformational opportunity for local graduates, giving them access to a relevant and vibrant curriculum and putting them on the path to success.

“It was fantastic to meet some of our graduating scholars and celebrate what they have achieved during their time at Loughborough University London. We are thankful to LLDC for partnering with us for the next three years to enable us to offer even more people the chance to join the Loughborough family.”

“Raising aspirations and helping people to fulfil their potential is a key part of the London 2012 Games legacy and the Inspiring Success course, in partnership with Loughborough University London, is just one way in which this is being delivered.

“We congratulate this new cohort of east London scholars who are about to embark on their masters courses; there’s no doubt they have bright futures ahead of them.”